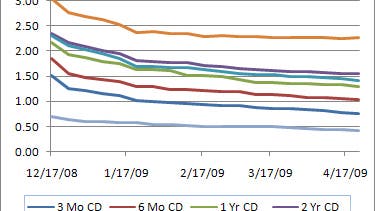 The federal funds rate has been tumbling from its high of 5.25 percent June 29, 2006, to its all-time low, a range of zero percent to 0.25 percent this past Dec. 16. During that time, each meeting of the Federal Open Market Committee ended with the Fed announcing a rate cut of at least 25 basis points. The FOMC is keeping the target rate at a range of zero percent to 0.25 percent as of today’s meeting. Death to savers by a thousand cuts.

Every rate cut that helped borrowers, short-changed savers, and the average yields reflect the damage.

Shorter maturities get the worst of it, of course, because of the quick turnover. But even five-year CDs seem priced too low to provide a real return. The Consumer Price Index indicates that we’re in a deflationary environment, but the drop appears to be largely attributable to falling energy prices. Many other components of the typical consumer’s budget are costing more, not less. Money locked up in low-yielding CDs is not likely to be keeping up with those increases.

Money market account yields have also dropped precipitously, most notably since the beginning of the year.

You can fare significantly better when it comes to CD and MMA returns by shopping for high-yield products. Bankrate’s high-yield CD listings show several institutions offering one-year CDs, for example, with yields of 2.5 percent or better. If you prefer total liquidity, our high-yield MMA listing shows many banks paying 2 percent or more.

All deposit institutions on Bankrate are insured by the FDIC.

How has the Fed rate reduction affected CD rates over the past five months?