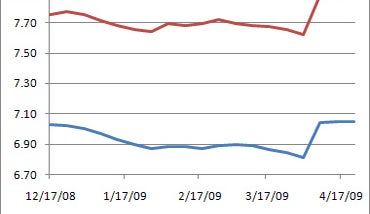 Since the Dec. 16, 2008, vote by the Federal Open Market Committee to cut short-term interest rates to a target rate range of zero percent to 0.25 percent, not many cars have been sold nor many car loans applied for. The Fed’s decision not to change the target rate today means auto loan rates probably won’t change, either.

Earlier this month, the Treasury Department released the monthly lending and intermediation snapshot for February. The survey looks at the 21 biggest banks receiving TARP funds and measures how much they are lending.

For the period from January to February, new consumer loans for cars and education, for example, decreased 47 percent. The Treasury reports that the lower number of loan originations, in part, reflects the weak demand for cars.

Which is true — car sales are down dramatically. Motor Intelligence reports that total light-vehicle sales for March were down 36.8 percent from the same month last year.

For people who did manage to break out of their economic bomb shelters and buy a car, interest rates have been coasting along fairly steadily with no significant changes to any of the loan terms surveyed.

A correction to the Bankrate survey in April caused a hiccup in the otherwise stable pattern. Almost all new-car loan rates shifted upward by about 20 basis points. Used-car loan terms changed by almost 30 basis points, but again that was due to survey methodology and not a true reflection of a change in rates.

Overall, auto loan interest rates are low for those that qualify for a loan. To find rates in your area, check out Bankrate’s auto rate tables.

How has the Fed rate reduction affected auto loan rates over the past five months?