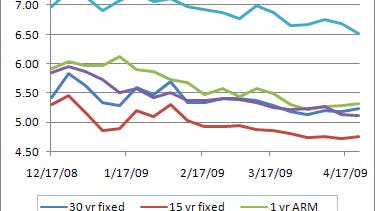 Mortgage rates have dropped more than 50 basis points since the Federal Reserve slashed its target federal funds rate to a range of zero percent to 0.25 percent Dec. 16. With no change in the rate at today’s meeting, there should be no impact on mortgage rates.

Mortgage rates began dropping shortly after the Fed announced Nov. 25, 2008, it would purchase $500 billion in mortgage-backed securities. On March 18, the Fed signaled it would buy an additional $750 billion in these securities.

The Fed is snapping up mortgage-backed securities in an attempt to drive mortgage rates lower and jump-start the nation’s housing market.

As a result of these lower rates, mortgage refinancing activity has soared recently. Applications for new home purchases also have increased in recent weeks, although at a relatively modest pace.

Walters believes mortgage rates will stay in their present range for a while. But he’s urging people to take advantage of today’s low borrowing costs rather than hoping rates will sink further.

“The economy always surprises us, and one day we’re going to get some off-the-charts number to the good side,” he says. “And all of sudden the stock market will rally and bonds will sell off and interest rates will go up.”

How has the Fed rate reduction affected mortgage rates over the past five months?