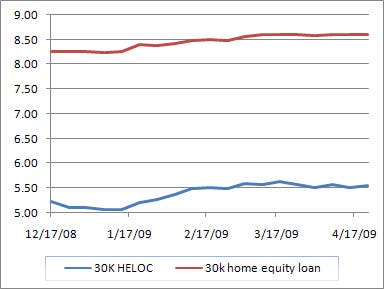 Rates on home equity products have been climbing steadily for many months.

Initially, rates on home equity lines of credit, or HELOCs, fell for several weeks after the Federal Reserve’s Dec. 16 decision to cut its target federal funds rate to a range of zero percent to 0.25 percent.

By mid-January, HELOC rates were at a recent low of 5.07 percent. However, in recent weeks, HELOC rates have risen. On April 22, they were at 5.55 percent.

Bob Walters, chief economist at Quicken Loans, says there are two reasons for the elevated rates.

First, the secondary market for home equity products has collapsed, reducing competition and allowing the remaining lenders to charge more simply because “they can get away with it,” Walters says.

In addition, Walters says, many lenders are recording “horrific losses” in their home equity portfolios and are increasing borrowing costs to protect themselves against a perceived higher level of risk.

Walters expects rates to remain elevated. In fact, borrowers with even slightly bruised credit may never again see home equity rates near or slightly above the prime rate, he says.

“The lessons have been learned,” he says.

The long-term picture is brighter for borrowers with good credit, according to Walters.

“If you have great, great credit, you still can get pretty attractive home equity loan,” he says. “But if your credit is middling or if you don’t have a ton of equity, you shouldn’t be banking on getting a home equity loan anytime soon.”

How has the Fed rate reduction affected home equity rates over the past five months?