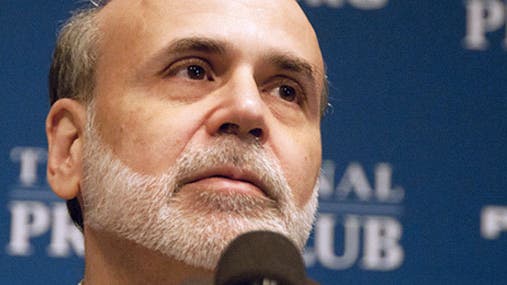 The Federal Reserve’s program of “quantitative easing,” known as QE, has been both praised and reviled for artificially lowering interest rates to help bring the U.S. economy out of the Great Recession. But what exactly is QE? What’s the outlook for continuing it or curtailing it? And what does it mean for consumers?

Click the timeline below to see the effect the Fed’s moves had on mortgage rates.

The Federal Reserve has a number of important responsibilities. But its top priority, according to its website, is to manage U.S. monetary policy by influencing interest rates and lending conditions to try to maximize employment and maintain price stability or moderate inflation.

Traditionally, the Fed has used its power to set the federal funds rate to influence short-term interest rates paid by businesses and consumers. The federal funds rate is a target rate used by banks when they make overnight loans to one another. The Fed has set this rate between zero and 0.25 percent, as low as it possibly can be, since Dec. 16, 2008, and it has remained there ever since. It has supplemented its rate setting with QE, a monetary policy built around the purchase of government and other securities on the open market to increase the money supply.

“The Fed is pushing interest rates as close to zero as it can. If you’re a saver, that punishes you. If you’re a borrower, you benefit from it,” he says.

Find the best rates on savings accounts in your area

The federal funds rate is also a convenient shorthand for the state of the U.S. economy, says Dan Geller, executive vice president of Market Rates Insight, a rates and data research company in San Anselmo, Calif. When the rate is as low as it has been, that’s a sign the Fed believes the economy isn’t yet healthy enough to handle higher rates.

“The message to the consumer is that the economy is still struggling to gain momentum,” Geller says.

The near-zero federal funds rate helped to stimulate the economy, but the Fed wanted to do more. So in 2008, it began purchasing billions of dollars of longer-term Treasury securities and securities issued or guaranteed by government-sponsored agencies such as Fannie Mae and Freddie Mac, which guarantee securities backed by pools of home mortgages. That started the Fed’s first round of QE. It would follow up with QE2 in 2010 and QE3 in 2012.

These nontraditional purchases, which are still made every month by the Fed, pushed long-term interest rates even lower than the level achieved by the federal funds rate alone. Low rates encourage businesses and consumers to borrow and spend money. That activity stimulates the U.S. economy, prompting consumers to buy even more houses, cars and other products and services while encouraging businesses to hire even more workers, invest in new equipment and increase production.

The Fed has said it plans to continue these open-market securities purchases, at least until it achieves its targeted levels of nationwide unemployment and inflation. The Fed’s target for unemployment is no higher than 6.5 percent, and its target for inflation is no higher than 2 percent. However — and this is a big, fat however — the Fed has said repeatedly that these targets shouldn’t be viewed as triggers that would cause an immediate end to its accommodative policies. Rather, the Fed will decide how to proceed and at what pace, if and when its targets are reached.

The billion-dollar questions for the U.S. economy — and its subsets of businesses, investors, consumers, homeowners, savers and so on — are when will the Fed curtail the stimulus and how will the economy respond? Right now, no one knows the answers to those questions.

Instead, speculation as to when the Fed will taper off the QE program, buying fewer securities, stopping its purchases or potentially selling what it owns, has been the hottest topic in financial circles.

“The question is to what extent can the Fed control the process? Can it make a smooth exit from QE? Or will interest rates move much more quickly than it would like?” Abernathy says.

Geller says that if the Fed tapers off smoothly, the economy will “arrive at a certain cruising altitude.”

“We compare it to an airplane that’s taking off,” he says. “There’s a goal where the Fed wants to see the economy. When we are still in the takeoff stage, we all have to maintain our seatbelts. That’s where we are now.”

There’s no guarantee that the Fed will achieve its ultimate goal.

“Normally, when interest rates start moving up, they move much more quickly than the Fed has been able to control them,” Abernathy says. “That can mean some people’s jobs might be on the line because the business they’re working for gets into debt trouble. The history of the Fed’s ability to control the movement of rates is not a very happy one.”

That’s not to say that interest rates will pop from zero to “the sky’s the limit.”

“I don’t mean rates will go wild and crazy out of hand,” Abernathy says. “But the Fed may want to move (rates) up 1 percent, and they could go up 2 or 3 (percent) over a year’s period.”

If the Fed gets the taper timing wrong, the bad outcomes could include rapidly rising consumer prices or an economic recession, as well as job losses, Abernathy says. One severe sign of a serious misstep could be what’s called an inverted yield curve, in which short-term interest rates become higher than long-term rates.

“When the short-term rates become more expensive than the longer-term rates and stay there for a few months, it almost always brings on a recession,” Abernathy says.