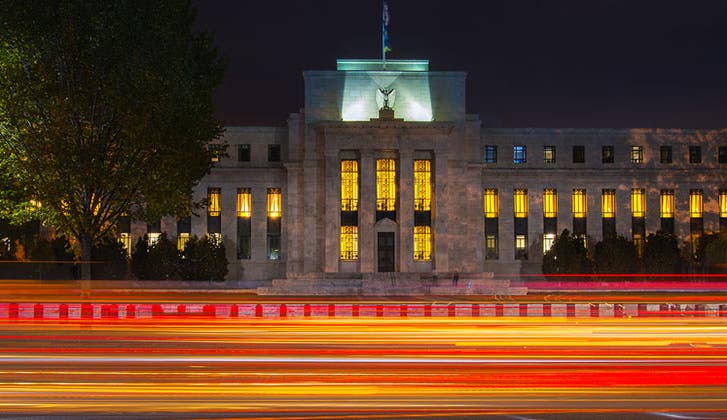 The Federal Reserve’s crystal ball is getting a little cloudy.

The data that the U.S. central bank uses to decide whether or not to raise interest rates is showing inconsistent signals about the health of the nation’s economy, just a few months after the first rate hike in nearly a decade. And that’s making it less clear where the Fed will take rates in the months ahead.

The Fed said to expect “gradual” increases this year after it raised rates by a quarter point in December. The plan was widely interpreted to be 4 rate hikes totaling a 1% increase over the course of the year, but the latest economic reports have been mixed.

But many observers believe recent data, combined with market turmoil, mean the next hike will not happen at the Federal Open Market Committee meeting that will take place Tuesday and Wednesday.

But that’s far from a lock. The decision is not an easy one to predict, even though the data used to guide it is widely distributed, says economist Diane Swonk of Diane Swonk and Associates.

“Unfortunately it’s not as simple as trigger points,” she says. And although it’s known that the Fed keys in on certain information like inflation, she says, “there’s not a checklist.”

While many economists don’t see a rate hike coming at the March meeting, there is still a chance it could happen.

“Rates of economic activity are stronger than people thought,” says Robert Johnson, the director of economic analysis at Morningstar. He points to recent reports that show strength in industrial production and gains in retail sales, durable goods and wages.

Johnson also notes inflation for consumer goods rose 0.3% from December to January, ahead of estimates for a 0.1% increase. The price of gas has even reversed course after months of decline and started to edge higher, he points out.

That 2% figure is key, because it’s the Fed’s target for inflation.

Johnson doesn’t see a rate hike coming this time. “But I certainly do think the numbers are heating up,” he says.

Another key measure for the Fed is the employment report, which showed strong gains for February. A better-than-expected 242,000 jobs were added last month, and the unemployment rate held steady at 4.9%.

William Dudley, New York Federal Reserve Bank president and a close ally of Fed Chair Janet Yellen, said in a recent speech that while some indicators look weak, he expects overall growth of about 2% for the year, and he expects further declines in the unemployment rate.

Swonk says the February numbers were positive and showed that labor participation rate is improving, meaning workers who had given up looking for work in the past are back in the mix. But even that likely won’t be enough for the Fed to move on rates.

“This doesn’t change the equation,” Swonk says, noting that there are still many uncertainties about conditions overseas, especially in Europe. “The risk is you get an itchy trigger finger and go too fast at this stage in the game.”

Wall Street and the world

U.S. economic data is only part of what the Fed focuses on. Policy makers must also pay attention to global issues, from the slowdown in Europe and China, to the plunge in oil prices driven in part by slower worldwide growth.

They must also keep an eye on financial markets. Right now, the gyrations that kicked off the year on Wall Street have leveled off, but the major indices are still down from recent highs.

“The Fed doesn’t like to think they’ve got this relationship that’s that close with Wall Street,” Swonk says. “But the reality is, it’s a two-way relationship.”

“It’s not that the Fed is beholden to Wall Street, but it can’t turn a deaf ear to real risks in the global economy either,” she adds.

The Fed’s Dudley acknowledged as much in his speech, but added, “Of course, this does not mean that we will let market volatility dictate our policy stance.”

Dudley says the central role of the U.S. markets in the global financial system and the role of the U.S. dollar makes it “all the more important that we conduct policy transparently and according to clear principles.”

That type of clarity is what Swonk is looking for.

Keeping rates where they are will benefit consumers looking for low-cost mortgages as the spring house-hunting season kicks into gear. While mortgage rates don’t rise in lockstep with the federal funds rate set by the Fed, the Fed’s policy does tend to influence longer-term interest rates in the economy. Because of that, a rate hike may be a blow to homebuyers already contending with rising home prices in much of the country. Freddie Mac reported that home prices rose 6.2% in 2015.

RATE SEARCH: Looking to buy a home? Find the best mortgage rates in your area at Bankrate.com.

Like other indicators, homes sales data is not sending a clear message about the health of the market at the moment. The Commerce Department said new home sales dropped 9.2% for the month, but the National Association of Realtors recently reported that existing home sales in January jumped 11% from a year ago.

The number of listings on the market also recently fell, suggesting that tight supply is likely to push prices higher — another reason that purchasers will feel relief if the Fed keeps rates down.

The downside from any delay in raising rates is that savers are still waiting to see rates move higher, especially as inflation is starting to tick up.