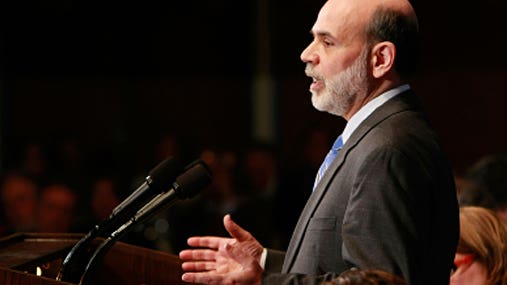 With the recent budget rumpus in Washington, the Federal Reserve’s September decision to continue full-bore with asset purchases seems prescient. The government shutdown, coupled with ongoing economic uncertainty, means the central bank may keep purchasing bonds at the current rate of $85 billion per month until mid-2014.

This week’s meeting of the Federal Open Market Committee all but promises to be a sedate and uneventful affair, at least on the surface. “Chairman (Ben) Bernanke has repeatedly told us that any moves will be data dependent, and we haven’t had much data recently, and some of the data we’ll be getting is probably not going to be as trustworthy as it usually is,” says Ward McCarthy, chief financial economist for Jefferies & Co.

The rate-setting committee meets Tuesday and Wednesday and is scheduled to release its latest monetary policy statement at 2 p.m. Eastern time Wednesday.

Interest rate policy won’t change anytime soon: 2015 is the most likely date for an increase in the federal funds rate, according to the Fed’s summary of economic projections released in September.

It’s not beyond the realm of possibility that the central bank could scale back asset purchases in December, but, “My guess is it’s more likely to happen next year,” says Dean Croushore, professor of economics and Rigsby fellow at the University of Richmond.

With the new Federal Reserve leader, presumably the recently nominated Janet Yellen, taking the reins in January and the ongoing dysfunction in Congress, it may be spring before the Fed eases up on quantitative easing.

“Without some type of agreement, we’re going to be going through the same thing in January and February,” says Brian Rehling, chief fixed income strategist for Wells Fargo Advisors, referring to the budget negotiations scheduled early next year.

“Unless the data starts surprising, it looks like (tapering) will be pushed out to the first quarter or first half of next year. Maybe March,” Rehling says.

Part of the fun of Fed-watching is deconstructing the slight changes in verbiage in the statements released after Fed meetings. Careful readers may get a sense of deja vu analyzing this week’s report.

“It wouldn’t surprise me if the statement reads almost as it did last time,” says Croushore.

At future meetings, the Fed might continue to experiment with communications about the future path of interest rates.

“I think that we’ll learn about it in minutes before it shows up in a policy statement because they don’t want to add to the confusion,” McCarthy says.

“They have struggled to transition from rate guidance as a calendar reference to being dependent on economic conditions, and I think they still are struggling with the best way to do that,” he says.

For instance, a specific unemployment rate was given as a possible trigger for a reduction in bond purchases. Another unemployment threshold was floated as part of what the central bank would look for before considering raising rates. But drops in the participation rate — the number of workers employed or gamely looking for work — have hastened the decline in the headline unemployment rate, currently at 7.2 percent. It’s heading toward the Fed’s thresholds quickly, but, “No one is ready to characterize the economy as strong, and that is what they would like to see,” says Croushore.

“They have been trying to move away from the threshold because they don’t want to tie their hands,” McCarthy says. “Frankly, the unemployment rate is difficult to interpret, and they do not want to withdraw accommodation prematurely.”

While next week’s statement may largely be a copy-and-paste job from the previous meeting, it could contain a light jab at policymakers, reflecting the Fed’s impatience with fiscal policy.

“We may see further notes on the disconnect between fiscal and monetary policy. Bernanke has loved pointing out that disconnect and how Congress is shooting the economy in the foot,” says Lindsey Piegza, chief economist for Sterne Agee.