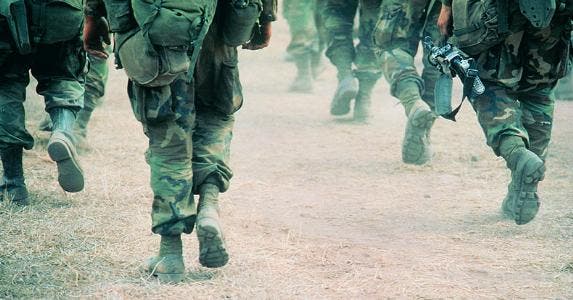 Members of the military may be the pride of their communities, but debt collectors lean on them to pay up, causing great stress on them and their families, a government consumer watchdog agency says.

Military members lodged more than 19,000 financial complaints in 2015 with the Consumer Financial Protection Bureau, up from 17,000 the previous year, with almost half dealing with debt collection.

One issue … is the concern that unpaid debts can threaten a military career.

Service members filed complaints about debt collections almost twice as often in 2015 as the general population did, the CFPB says in a report.

Threat to a military career

Debt collection complaints totaled more than 46% of all complaints by service members, the CFPB’s report says: “While this could be due to a variety of factors, one issue … is the concern that unpaid debts can threaten a military career.”

The trade group criticizes the agency for issuing the report with complaint data that have not been verified. “The CFPB report itself acknowledges that the number of debt collection military complaints could be caused by a variety of factors,” Sebrell says.

Even so, Ira Rheingold, executive director of the National Association of Consumer Advocates, says the bureau’s findings come as no surprise. The industry is plagued by poor record retention. “The debt collector/debt buyer industries continue to be out of control,” Rheingold says.

Service members are relatively young, uneducated and unsophisticated about debt, and failure to pay debts can end their careers.

Holly Petraeus, the CFPB’s assistant director for service member affairs, says predatory lenders continue to spring up around military bases. On a visit to the Fort Campbell Army base a year and a half ago, she counted 20 fast-cash lenders in a 4-mile stretch.

“Service members can be targeted by bad financial actors,” Petraeus says. “The realities of military life, such as deployment or frequent moves, can also make service members particularly vulnerable.”

The CFPB outlined problems in many financial areas, but the most complaints came in 3 areas:

The majority of complaints in the financial services category — 50% — involved accusations of fraud or scams, the report says. Another 26% dealt with excessive or unexpected fees, while 8% involved issues of disclosure or lost or stolen checks.

With credit cards, the largest percentage of complaints — 15% — centered on billing disputes. The CFPB says service members complain that they are confused and frustrated by the billing process and by their limited ability to challenge inaccuracies on their monthly statement.

“The cost and structure of a particular (payday) loan can make it difficult for service members to repay,” the report says.