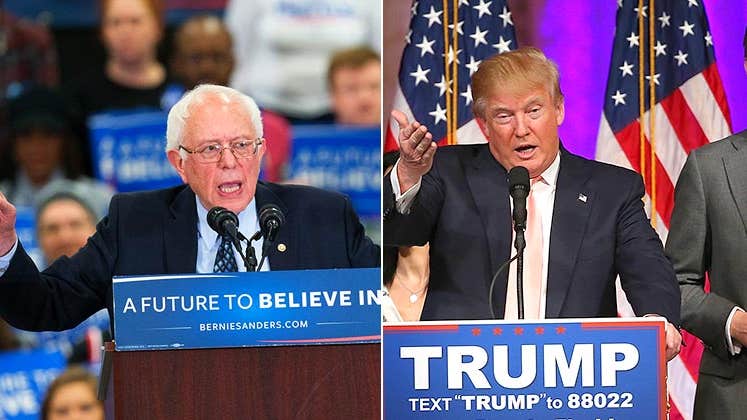 A billionaire developer who is also a reality TV star wants to build a huge wall along the United States’ southern border, and he pledges to force another country to pay for it. He’s suggested violence could break out if he’s denied his party’s nomination for president. He scares some people so much, they’re contemplating moving to Canada if he lands in the White House.

A sitting U.S. senator uses the phrase “democratic socialist” to describe himself. He wants to “bring climate (change) deniers to justice.” He not only proposes a tax hike should he win the presidency, the $15 trillion (or more) in new revenue would represent the “largest peacetime tax increase in history,” according to 1 analysis.

So, yeah, this presidential election cycle has been weird. And it’s left some people ill at ease.

“This election, in my opinion, is creating greater anxiety among Americans, which then spills over into their financial decision-making, as well,” says Joe Heider, financial adviser and president of Cirrus Wealth Management in Cleveland. “I don’t think you can escape the fact that whatever your political views are, you haven’t seen a nomination process quite like this one.”

More than one-quarter of Americans indicate they’ve become more cautious with their money as a result of this presidential campaign, according to the latest Bankrate Money Pulse survey. Democrats, Republicans and independents are all about equally as likely to exhibit cautious financial behavior.

The survey was conducted March 17-20, 2016, by Princeton Survey Research Associates International and included responses from 1,000 adults living in the continental United States. The margin of error is plus or minus 3.8 percentage points.

Altering plans because of the election

Han Chang’s unease over a potential President Donald Trump has given him pause. He and his wife won’t shop for a single-family home this year as they had planned.

“I’m hesitant to buy in the current political environment, and so we’re kind of compromising basically by going to a multi-family house,” says Chang, 29, who last month moved to Austin, Texas, from Florida. A multi-unit home will guarantee some income from rent in case of a recession, he says.

Chang, a self-described moderate, disagrees with last year’s interest rate hike by the Federal Reserve and doesn’t know what might happen to the U.S. economy or the country’s standing in the world should Trump win office. Uncertainty drives Chang’s personal finance decisions.

“I’ve reduced my monthly contributions to index funds, opting instead to hold cash short-term to see how the situation pans out, and I’m planning on selling some of my stock positions if Trump does take the presidency,” says Chang, a software engineer and co-founder of the personal finance website InvestmentZen.

What should you do if you’re nervous?

Chang is undoubtedly nervous, and financial advisers have seen an uptick in investors like him. These investors are worried about their money — even more than is typical for a presidential election year — because of the tenor of the campaigns.

Still, the money pros urge their clients to remain calm.

“We tell people that Washington and politicians would love to have as much power over the economy as we think they do. But they really don’t,” says Aaron Leaman, principal and chief investment officer at Signature Financial Planning in Pittsburgh.

“Larger forces” than who wins the presidency and what Congress does or doesn’t do dictates how investments will fare, Leaman says. And as long as investors maintain a diversified portfolio — he recommends placing 20% to 40% of your investments in U.S. equities — they should be able to weather most political or economic dust-ups.

“I believe that America ultimately will stumble along, and even if they don’t make the right decision for president, in the end it may be America’s diverse enough and balanced enough that ultimately this isn’t going to have a dramatic impact on financial markets,” Heider says.

So, no, now is not the time to throw all your money into gold or sell off your stocks. Now is the time to sit tight.

“You may want to move to Canada, but you don’t want to move your assets to Canada because the economy is going to be OK,” Leaman says.

<p>Mike Cetera is an editor on the banking, credit card and mobile finance beats, working out of Bankrate's Chicago office. He joined Bankrate in January 2011 as an assistant managing editor for two of the company's personal finance websites, Interest.com and Bankaholic.com. Prior to arriving at Bankrate, Cetera was editorial director for Sun-Times Media's suburban Chicago properties, a collection of four daily and 11 weekly newspapers. He led more than 100 journalists in delivering award-winning local news coverage in print and online.   Cetera also served as a managing editor and senior Web editor for the newspaper company. Stories and projects he has edited have twice won Peter Lisagor Awards, Chicago-area journalism's top honor. His newspaper experience also includes several years as a reporter covering crime and municipal government. Cetera is a 1997 graduate of the University of Illinois at Urbana-Champaign, where he received a bachelor's degree in journalism and was editor in chief of the school's independent newspaper. In 1998, he earned a master's degree in public-affairs reporting from the university's Springfield campus. Cetera lives in suburban Chicago with his wife and two children.</p>