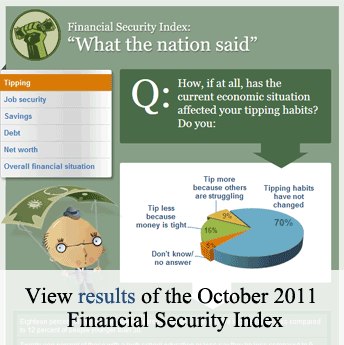 Bankrate’s Financial Security Index slumped in October, falling to 92.8 from 93.9, and is now at the second-lowest level of the year just slightly above the abysmal August reading of 92.3. A reading below 100 indicates feelings of less financial security relative to 12 months ago.

Americans’ feelings about debt, savings and net worth continue to erode.

This month, Bankrate asked Americans if the lousy economy affected their generosity when it came to tipping. Most Americans, 70 percent, say their tipping habits remain unchanged despite the current conditions. But as Sheyna Steiner relates in her story, “Has economy curbed your tipping practices?” the truth of the matter is likely a matter of perception and goes deeper than mere numbers reveal.

For highlights about this month’s Financial Security Index findings, check out Bankrate’s slideshow.