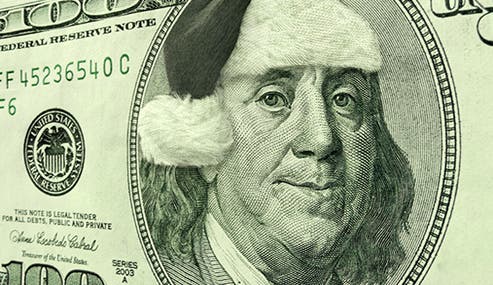 Santa Claus is tightening his belt this season. Nearly 4 in 10 consumers plan to spend less on gifts and other holiday trappings than they did last year, according to a survey commissioned by Bankrate.

Only 14 percent of the respondents in the survey, done in connection with Bankrate’s monthly Financial Security Index, say they plan to increase their holiday spending this year, and about half say they will spend the same as last year. The poll results don’t necessarily support the notion of a strengthening economy, as suggested by recent economic data. Many Americans clearly don’t see it that way.

The U.S. added more jobs than economists had expected in November, and the unemployment rate dipped to 7 percent, its lowest level in five years. Household wealth reached an all-time high in the third quarter of this year, as stock and home prices increased, according to the latest figures from the Federal Reserve.

But average Americans have yet to see their incomes follow this upward trend, and that leaves them with little or no room to increase holiday spending.

“Money is still tight and incomes have been stagnant for so many people that they’re either still in belt-tightening mode or unable to spend appreciably more than last year,” says Greg McBride CFA, senior financial analyst at Bankrate.com.

Political gridlock in Washington that led to a partial government shutdown in October also had a psychological effect on shoppers as they felt less secure about the economy, says Sanjit Sengupta, professor and interim chair of marketing at San Francisco State University.

“This year, one of the biggest issues was the government stalemate in Washington and how that put a gloom on everybody,” he notes.

Retailers were optimistic about sales this holiday season and started hiring for the holidays in September, but they are growing disappointed.

“If they reach the same levels of last year we will be delighted,” Sengupta says. “I think sales might be worse than last year.”

Consumers spent 3 percent less during the four-day Thanksgiving/Black Friday weekend this year compared with last, according to the trade group the National Retail Federation. Normally, Black Friday is a lead indicator for the rest of the season.

Some big retailers started their Black Friday deals earlier on Thanksgiving Day, but that wasn’t enough to entice shoppers to spend more.

Colder-than-usual temperatures and snowstorms in many parts of the country may contribute to weaker holiday sales this year. But some holiday shoppers could choose to chill out, not because of the weather, but because of debt or inadequate savings.

In another part of the survey, more than a third of consumers say they’re less comfortable with their savings than they were a year ago. About one-fifth feel more uneasy about the debt they’re carrying, roughly even with the number who feel better about their debt than they did last year at this time.

One reason some shoppers may be conservative when it comes to holiday spending is they don’t start a holiday budget early in the year, she adds. But it’s not too late to plan.

Consumers on a tight budget may fall for the temptation of going on a holiday shopping spree with credit cards, even if they didn’t plan to spend much. On average, consumers spend nearly 40 percent more on credit cards in December than they do in a typical month, according to a recent survey by TransUnion.

Expect deals after the holidays

There may be a silver lining for consumers who hold back on their holiday spending: after-Christmas bargains. If sales fail to meet retailers’ expectations, stores may need to sell items at deep discounts to get rid of inventory.

“I believe that desperation will come after Christmas,” Sengupta says. “They try to maintain their policies until Christmas, but the real panic sets in early January when they have to start doing their accounting for the last quarter and they have excess inventory. That’s when consumers will really benefit from some good bargains.”