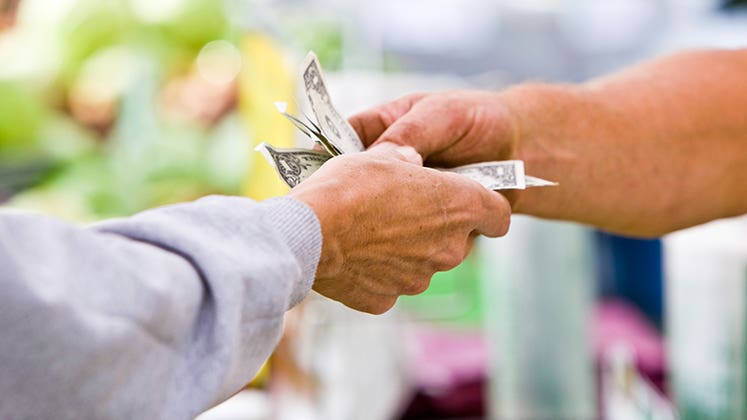 Low gas prices may have left extra cash in car owners’ pockets this year, but chances are it’s not staying there.

When asked what they were doing with any extra money, 40 percent of Americans said they used it to pay for other necessities such as groceries and rent, according to a survey that accompanied Bankrate’s Financial Security Index for May. Another 14 percent of survey participants said their savings went to nonessentials like dining out or taking a vacation.

Only 23 percent said they were saving or investing the extra cash.

“In a testament to tight household budgets, more Americans spent the savings from lower gasoline prices on necessities than anything else,” says Greg McBride, CFA, Bankrate’s chief financial analyst. “The percentage of Americans earmarking money for everyday necessities outpaced those using it for discretionary purchases by nearly 3 to 1.”

How much did we save?

Based on the numbers, gas-related savings should be significant in 2015.

Gas prices have fallen 28 percent over the past 12 months, according to a Bankrate analysis of government data. The Energy Information Administration estimates that American households will spend about $700 less on gasoline in 2015 than they did in 2014. If that bears out, automotive fuel spending will be at an 11-year low.

The Financial Security Index is based on a telephone survey conducted by Princeton Survey Research Associates International. The survey was taken from April 30 to May 3 with 1,000 adults living in the continental U.S. It has a margin of error of plus or minus 3.6 percentage points.

Under different economic conditions, an increase in disposable income would mean a significant jump in spending on nonessential items like clothes, trips and entertainment, McBride says. That hasn’t been the case this time.

“When just 14 percent of Americans ramp up spending as a result of gasoline savings, you see why the economy is growing at such an anemic pace,” he says.

Economic growth has indeed been slow. According to the Bureau of Economic Analysis, U.S. gross domestic product increased 0.2 percent in the first three months of the year after having grown 2.2 percent in the fourth quarter of 2014.

Their numbers may have been small, but those who were willing to treat themselves were still a welcome sight for many, says John Sweeney, an investing expert at Fidelity.

“The consumer discretionary sector has been anticipating this,” says Sweeney, Fidelity Investments’ executive vice president of retirement and investment strategies. “I’m talking about places that sell things that aren’t staples — movies, restaurants and vacations. They have absolutely been the beneficiaries of there being more cash in the environment.”

How to make the most of your gas savings

There are, however, more prudent uses for that cash than random spending, Sweeney says.

“For folks who are investing: Now is a good time to use any extra money to save for retirement,” he says.

Consumer savings expert Andrea Woroch added that now might also be the time to start a separate savings account for emergencies. She says that setting aside 10 to 15 percent of what you earn for emergencies can help reduce dependency on borrowing through credit cards.

For example, when the engine in Woroch’s Jeep died a few weeks ago, she was able to dip into her emergency fund for a down payment on another vehicle.

“If you don’t have an emergency account, or the balance is low, you need to put money away for things like that,” she says. “It’ll help you avoid high credit card fees when something goes wrong.”