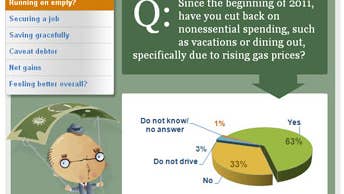 By a whopping margin of nearly 2-to-1, Americans say soaring gas prices have led them to cut nonessential spending like dining out or taking vacations. The results of the national Financial Security Index suggest that, even as the job market strengthens and growth quickens, families face enduring duress due to driving economic demands.

Strikingly, the impact of pumped-up gas cuts across nearly all income groups, although clearly lower-income earners are impacted the most. Nearly three-fourths of households earning less than $50,000 say they’re cutting discretionary spending in response to gas prices.

Among higher earners, or households earning more than $75,000 per year, 54 percent said they hadn’t altered their spending. But even among this more affluent group, a strong 45 percent said they had cut back elsewhere specifically due to the rising price of topping off the tank.

“You’re going to feel it in terms of needing to work longer to have the exact same amount of income you had six or 12 months ago,” he says.

But the experts also offer suggestions on how consumers can be proactive in dealing with unexpected financial shocks like soaring commuting costs.

To start, get a handle on what you are spending, and for what. From there, establish a budget that factors in the new realities of gas prices. Make sure you stick to that budget, which should earmark some funds for an emergency savings account.

“I’ve always told people that using a program like Mint, which is free, at least captures where they’re spending money in big buckets,” says Bartlett. “And then when something like this happens — and it doesn’t matter if it’s gasoline or the price of milk or electronics — when it impacts their budget, they can look at the bigger picture and see where they can cut back.”

Every budget needs to leave you a little financial breathing room, says Julie Murphy Casserly, CFP, president of JMC Wealth Management in Chicago. Planning ahead can keep you in your comfort zone when a crunch hits, allowing long-term financial plans on stay track.

“It’s going to hit you at some point, anyway,” she says. “But the problem is that people don’t plan for it. For instance, when you buy a home, you know that your water heater is going to break seven to 10 years after you buy it. You should be putting $35 a month into a savings account so that you have the money for a new one in the seven-year time frame.”

Yet the reality is that inadequate savings remains a grave worry for a big chunk of the American public, the Financial Security Index found. More than one-third of respondents to the May survey said they were less comfortable with their level of savings compared to a year ago.

But in a glimmer of good news, the number of people feeling more secure about their job rose significantly.

“Perhaps buoyed by a strong jobs report released the morning of May 6, Americans’ feelings of job security rebounded from April, with only 18 percent feeling less secure than 12 months ago, compared to 25 percent in April,” says Greg McBride, CFA, Bankrate’s senior financial analyst.

Overall, the Financial Security Index is up this month to 98.5 from April’s low of 93.5. Nonetheless, “any index value below 100 indicates less comfort or financial security than 12 months ago, so Americans remain pessimistic,” McBride says.

View the accompanying slideshow  and poll for more survey results.

Princeton Survey Research Associates International obtained telephone interviews with a nationally representative sample of 1,003 adults living in the continental United States. Interviews were done in English from May 5-8, 2011. Statistical results are weighted to correct known demographic discrepancies. The margin of sampling error is ±3.6 percentage points.