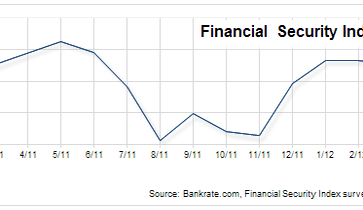 April showers may bring flowers, but this year more than daffodils are blooming. Bankrate’s Financial Security Index shows that Americans’ sentiments about their financial security may be turning positive for the first time since polling began in December 2010.

Note that the index is at a tipping point. In April, the Financial Security Index registered at 99.9, the highest ever so far. Any reading greater than 100 indicates improving financial security compared to a year ago, while any reading less than 100 indicates decreasing financial security compared to last year. So Americans still haven’t crossed the threshold into feeling more secure, but they’re close.

In just about every category, there was marked improvement from just last month. The lone exception was job security, which slipped following the disappointing March jobs report released April 6. Just 1 in 5 Americans say they are more secure in their jobs compared to last year, and 22 percent are less secure. The majority feels about the same.

More comfortable with savings and debt

Americans’ feelings on savings rose for the fifth consecutive month, with the margin between those who feel less secure and those who feel more secure nearly cut in half since December. However, the outlook seems to dampen with age. Those younger than 30 tend to be more comfortable with savings, while those 50 and older are less comfortable compared to other age groups.

More On The Financial Security Index:

Attitudinal change about debt was just as dramatic, and here income plays a major role.

“Americans’ comfort level with debt is now the highest since June 2011,” says Greg McBride, CFA, Bankrate’s senior financial analyst. “Households with annual income of $50,000 or higher are more comfortable than other groups while households with income under $30,000 are less comfortable.”

In light of the relatively sunny outlook on financial security, consumers should be feeling more optimistic about their prospects in the stock market, particularly with interest-bearing instruments paying such paltry yields. But Americans are not quite there yet.

“Those under age 30 are only slightly more inclined to invest in the stock market, at 23 percent, despite having the luxury of long time horizons and a greater burden of retirement savings than any previous generations,” he adds.