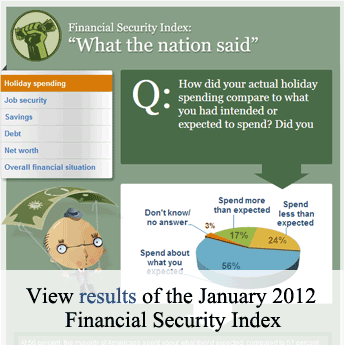 If prognostications based on the Mayan calendar are correct, 2012 could be the year the world ends. But Americans feel fine, Bankrate’s new survey suggests.

The Financial Security Index rose for the second month in a row to a seven-month high of 97.3, the highest since June’s reading of 97.8. While that is encouraging news, an index value below 100 reveals less financial security relative to a year ago.

Each month, survey respondents are asked five questions designed to gauge their level of financial security, plus a sixth “wild card” question on another personal finance topic. In January, survey respondents were asked about whether they spent more or less than expected over the holidays. Sheyna Steiner reports the findings in her story, “Holiday spending kept under control.”

Feelings on net worth turned positive for the first time since July, with 24 percent of Americans reporting higher net worth than one year ago and 22 percent reporting lower net worth.

For more details on the survey results, see Bankrate’s story, “Americans upbeat at start of year.”