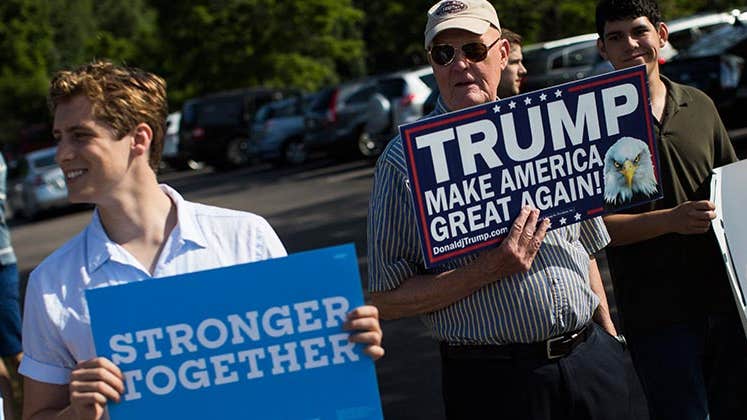 Americans are so alarmed by the presidential election that 3 in 5 say that its outcome poses the biggest near-term threat to the economy.

In a national survey, Bankrate asked adults what they think poses the biggest threat to the U.S. economy over the next 6 months and 61% of respondents said it will be the outcome of the presidential election. The election outcome finished far ahead of terrorism, struggling overseas economies, a decline in the stock market and an increase in interest rates.

Fear runs across the board

At least 60% of every party affiliation — Democrat, Republican and Independent — identified the election outcome as the gravest threat to the economy. So did a majority of every demographic group — gender, age, income, ethnicity and education level.

The election campaign seems to be corroding Americans’ sense of financial security. The Bankrate Financial Security Index — based on survey questions about how people feel about their debt, savings, net worth, job security and overall financial situation — plunged to its lowest level in more than 2 years. The September reading of the Financial Security Index came in at 99.9.

An FSI reading below 100 indicates that people have a fading feeling of financial security. At a reading of 99.9, respondents feel just a smidgen more anxious this month. This ends 27 consecutive months in which Americans had reported improved feelings of financial security compared to the previous year. This month’s reading is the lowest since May 2014 (98.7).

In the Buckeye State

Ohio is such a zealously contested swing state this year that on Labor Day, all 4 presidential and vice presidential candidates’ planes ended up parked at Cleveland’s airport at the same time.

Here are the views of 3 Ohioans of varying political stripes:

Randy Majewski lives in Port Clinton, Ohio, and is a registered Republican. His main concern about the economy, he says, “is all these jobs that are going overseas that we’re losing. I think we ought to bring them back. Everybody promises to do something about it but no one does, and we have plants closing all over the place.”

His son, J.R. Majewski, also of Port Clinton, doesn’t belong to a party, but he does “gravitate toward libertarianism,” he says.

“Personally, I think the biggest threat is either terrorism or the manipulation of interest rates,” the younger Majewski says. “To me, the potential for terrorism is fairly tangible at this point with ISIS and North Korea’s nuclear posturing.”

As for the economy, J.R. Majewski is skeptical of predictions of boom or bust, regardless of which candidate wins: “Certainly, Trump and Clinton have their policies, but I don’t believe their policies have been vetted to the point where we understand whether or not they can be implemented.”

For Polly Gerken, a Democrat and a member of the Toledo, Ohio, school board, the election is about the multi-dimensional disaster that she believes would follow a Donald Trump victory.

“I cannot let myself imagine that it’s possible that this guy is going to get elected,” she says. “And I suppose that with all the potential for destabilizing relationships across the globe, that can’t be good for the economy. But mostly I’m just afraid of the ugliness he provokes.”

MORE: Chelsea’s a millionaire? How much the candidates’ offspring are worth.

Is it about news coverage?

It’s not surprising that many Americans say the outcome of the election poses the biggest threat to the economy, says Sherry Bebitch Jeffe. She is professor of the practice of public policy communication at the University of Southern California. Her explanation for the poll results: The presidential campaign dominates news coverage.

“It’s just sucking up all the oxygen in the media,” she says. “Donald Trump is more fun to cover than the stock market.”

There’s much more coverage of the candidates’ antics than of terrorism, the problems facing other countries’ economies, the stock market and interest rates, Jeffe says.

The survey was conducted Sept. 1-4. Five days after polling concluded, stock indexes fell more than 2%. Had the poll been conducted after that sizeable drop-off, and not before, more than 8% of respondents might have identified a decline in the stock market as the biggest threat to the economy, says Jeffe’s husband, Douglas Jeffe, a public affairs consultant who frequently uses polls in his work.

Similarly, he says a terrorist attack — and the resulting wall-to-wall news coverage — would result in more than 12% of respondents citing terrorism as the chief threat to the economy.

In the 1992 election, Bill Clinton’s campaign advisers had an informal catchphrase: “The economy, stupid.”

That campaign was about issues. This campaign is more about personalities and less about policy, Sherry Bebitch Jeffe says. “It’s who you want to have a beer with, which is scary, but nonetheless …” she says, trailing off.

MORE: Clinton’s and Trump’s homes (and how much they’re worth).