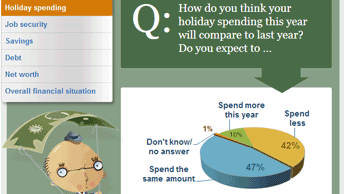 This holiday season, plucky shoppers won’t battle crowds as much as they’ll combat high unemployment, stock market volatility and stagnant wages to bring home the goods for family and friends.

Economic uncertainty may be taking a toll on their shopping lists. Four out of 10 Americans (42 percent) report that they plan to spend less this holiday season than they spent last year, according to Bankrate’s November Financial Security Index.

If holiday cheer is directly proportional to the level of spending — and retailers would like you to believe it is — many Americans will be having a slightly less cheery celebration this year. Just 1 in 10 plan to spend more than they did one year ago.

While consumers are busily planning frugal festivities, retailers are gearing up for an adequate holiday season. According to the National Retail Federation, holiday sales are expected to get a 2.8 percent boost over 2010. Last year brought an unexpected gift to stores, with a year-over-year increase of 5.2 percent.

This year, shoppers may not be able to pull off another holiday miracle. For one thing, consumer spending has been increasing faster than incomes. The most recent personal income and outlays report from the Bureau of Economic Analysis showed that spending went up 0.6 percent in September while incomes rose only 0.1 percent. 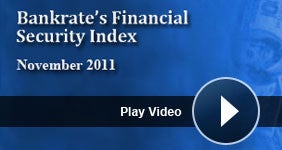 Watch the video on holiday spending

Without taking on debt, those levels of enthusiastic spending vis-a-vis incomes will be difficult to sustain. And many banks and lenders aren’t peddling loans and credit cards the way they used to.

Since the end of 2007 to the end of the third quarter this year, consumers have trimmed about $152.3 billion in revolving debt.

“People are spending, but they are not going into debt. They are deleveraging; the debt is still massive,” says James Livingston, a professor of history at Rutgers University and author of “Against Thrift: Why Consumer Culture is Good for the Economy, the Environment and Your Soul.”

“They may have access to loans. That is debatable, but they have no recourse — or less recourse — to credit cards and home equity,” he says.

Sustainable or not, consumer spending is being counted on to help lift the economy out of the doldrums — particularly as the European debt crisis threatens this country’s recovery. A recent economic letter from the Federal Reserve Bank of San Francisco put the odds of a recession in the first half of 2012 at 50-50.

“There is no economist who doesn’t say without consumer spending in the short term we won’t have a robust or even a substantial recovery,” says Livingston. “The dark underside or the downside is that economists say we need short-term consumer spending, but in the long term we need to save more.”

Consumer spending is often said to account for about 70 percent of gross domestic product — and the holidays account for a small but significant portion of that.

Unlike consumers, retailers observe the advent of the shopping season on Nov. 1. Black Friday marks the kickoff of the seasonal shopping spree in the minds of consumers.

“Most of the stories we tell ourselves are apocrypha! The most interesting and fun version is that it’s the day that the retailers finally go into the black. They have been losing money all year and this day is the turning point so that by the end of the year, the chronological year, they can post numbers in the black and are actually turning a profit,” Livingston says.

Though retailers do make most of their profits in the last quarter of the year, they are actually making money all year long, says Chukumba.

“That might have been true 100 years ago and may be true for really small retailers — mom and pop operations — but generally retailers are going to make money all year round,” Chukumba says.

When it comes to holiday spending, the celebratory nature of the season encourages excess instead of restraint, which may lead consumers to say one thing and then do another — possibly at the last minute.

“Come on, who doesn’t say that (they’re going to spend less) every single year? And yet Best Buy and Amazon and Macy’s crank out record sales most Decembers. My guess is that the other 10 percent — those who expect to spend more — are simply being more honest with us and themselves,” says Dan Danford, CFP, principal at the Family Investment Center in St. Joseph, Mo.

Bankrate’s survey found one group that says they’re definitely ready to splurge this year: 20 percent of 18- to 29-year-olds plan to shell out extra money for the holidays. Only 10 percent of the next age bracket, 30- to 49-year-olds, say they will spend more.

With incomes treading water and decreased appetites for taking on debt, maybe the people who plan to spend more are just taking one for the team and doing their part to bolster the economy.