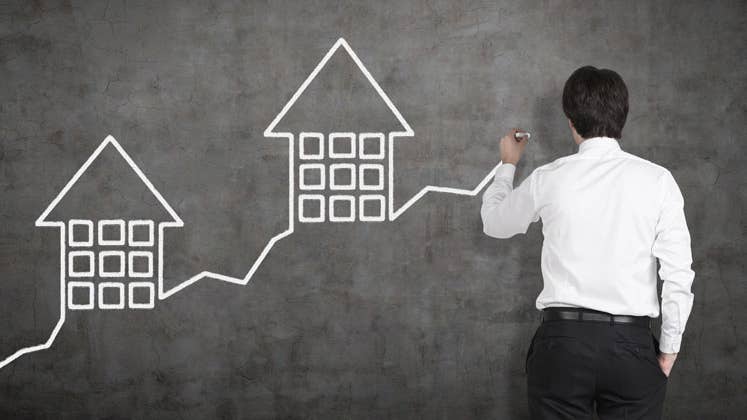 Consumers remain optimistic that the prices of their homes will continue to rise even though the market appears to be losing steam.

More than half of the respondents in a national poll accompanying Bankrate’s monthly Financial Security Index say they think home prices will go up in the next 12 months.

This positive outlook mirrors what industry experts expect, even as the pace of home sales and home price appreciation have slowed compared with last year.

“This may not be a great market, but it’s a good market,” says Jed Smith, managing director of quantitative research at the National Association of Realtors. “Prices are still increasing. The market is just stabilizing.”

Smith says the majority of NAR’s Realtor members also expect home prices to rise over the next year, though not as much as they did after the recession.

“The median expected price increase for the next 12 months is 3.4 percent,” he says. “And remember that real estate is local. It can vary block to block and even house to house.”

Not a great year so far

Nationally, the median price for previously owned homes rose 4.4 percent in the second quarter compared with the same period last year, according to the latest NAR quarterly report. That’s the slowest price growth pace since 2012.

The pace of home sales also has slowed. The adjusted annual sales rate of previously owned homes was 5.15 million in July, according to the latest NAR report. That’s 4.3 percent below the sales rate a year before.

Headed in the right direction

The fact that consumers believe home prices will continue to improve isn’t really any guarantee that prices will rise, but it’s a good sign of a strengthening economy.

“Housing is one of two things — the stock market being the other — that consumers look to as an indicator for whether things are headed in the right direction or the wrong direction,” says Greg McBride, CFA, Bankrate’s chief financial analyst. “The expectation of continued home-price increases underscores an expectation for continued improvement in the job market, household finances and the overall economy.”

So what’s the matter?

If consumers feel so confident about the market, why has the market cooled from last year? Mortgage rates are still near record lows, making it relatively cheap for potential homebuyers to finance a 30-year mortgage.

One answer, McBride says, is income stagnation. Wages aren’t rising at the clip needed to spark an increase in homebuying.

“Housing has been sluggish in 2014, despite continued economic growth and job creation,” McBride says. “What could really jolt housing to life in 2015 would be some long-awaited growth in household income. Without it, consumers will remain reluctant, or unable, to make big-ticket home purchases.”

The limited number of homes for sale in some areas and tighter lending standards also have played a role in this slow recovery, says Tom O’Grady, CEO of Pro Teck Valuation Services.

“Credit is still tight and we are still dealing with tight inventory, so that is keeping a lot of people out of the market,” O’Grady says.

In addition, piling student debt has kept many first-time homebuyers from qualifying for a home loan, O’Grady says. Student debt has tripled in the past decade to $1.2 trillion, according to the Consumer Financial Protection Bureau. The hefty payments on these loans are a huge financial obstacle to many would-be buyers.

Still, the optimism among consumers will help keep the housing market on the right track, O’Grady adds.

Only 8 percent of the respondents in Bankrate’s survey believe home prices will drop, and 31 percent say prices will stay the same. The survey was commissioned by Bankrate and conducted by Princeton Survey Research Associates International. It included answers from 1,003 adults in the U.S.

<p>Polyana da Costa, former mortgage analyst/reporter for Bankrate, holds a bachelor's degree in journalism from San Francisco State University with a minor in international relations.</p> <p>Polyana was a real estate reporter at the Daily Business Review for about five years. While at the Review, she covered the crash of the housing market and an array of issues related to the foreclosure crisis.</p> <p>Polyana also has worked as a business writer for the Pensacola News Journal, where she covered personal finance and small businesses. Before her move to Florida, she held an internship at KGO-TV, an ABC-owned television station in San Francisco. She also interned as a reporter for the Statesman Journal of Salem, Ore.</p> <p>Polyana has been recognized with numerous journalism awards, including the National Association of Real Estate Editors' James D. Carper Award in 2009, for best entry by a young Journalist.</p> <p>She also won two other NAREE awards for her commercial real estate and finance/mortgage coverage; two Green Eyeshade Awards; and two Sunshine State Awards from the Society of Professional Journalists, including best real estate reporting in 2009.</p> <p>Polyana speaks fluent Portuguese and Spanish.</p>