This year brought a tremendous amount of volatility and economic uncertainty, but the year is ending on an up note, according to a recent survey by Bankrate.com.

The Financial Security Index this month registered at 95.8, up from last month’s reading of 92.5. Any reading lower than 100 indicates that consumers are struggling compared to last year, but the increase is a good sign for the new year, it is hoped.

The silver lining beneath the stormy economic news of late is that consumers have picked up some good financial habits, including thoroughly reviewing their financial situations multiple times per year, according to Bankrate’s survey.

More than 90 percent of Americans say they review their finances at least once per year — and 47 percent report doing it more than six times per year, the survey found.

When it comes to evaluating your financial life, there are reviews and then there are “capital-R” Reviews. The difference between staying on top of day-to-day business by balancing checkbooks and reconciling credit card statements versus doing complete evaluations that investigate every financial nook and cranny is many, many hours. 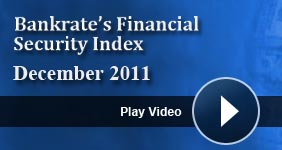 “The (survey respondents) may be adding up debt and invested assets and savings, and that’s it,” says Wayne Copelin, CFP, president of Copelin Financial Advisors in Sugar Land, Texas. “That’s not bad; it’s better than not doing that.”

But it does fall short of the intensive review that some experts recommend doing as often as four times a year. Two out of 10 survey respondents, or 22 percent, say they do review finances on a quarterly basis, falling into the three-to-five-times-per-year category, while 21 percent say they check out their finances one or two times per year.

“For most individuals, thoroughly reviewing finances three to four times per year is sufficient. This allows you to recognize trends, evaluate performance and adjust behavior without being caught up in short-term variances,” says David Munn, CFP, at Munn Wealth Management in Maumee, Ohio.

As with most things in life, paying someone to tend to the tedious details would be ideal. Failing that, consumers can comb through their financial affairs themselves. It just takes time and organization.

Start with a cash-flow analysis. If you haven’t previously whipped up a full budget of all household inflows and expenses, now would be the time — particularly if you’re consistently running out of money at the end of the month.

By tracking expenses for a month, you’ll get a detailed picture of where spending is going awry and some clues as to how to fix it.

For people who are comfortable with their cash-flow situation and track spending on a regular basis, comparing your checking account against a past baseline is sufficient.

For instance, “How much money did you have in your bank account six months ago and one year ago: is there more or less now?” says Larry Rosenthal, CFP, president of Financial Planning Services in Manassas, Va.

Next, check your insurance: Do you have enough, and is it still appropriate for you? You’ll need to evaluate all of your insurance policies including long-term care, disability, life insurance, property and casualty as well as health insurance.

Investments should also be investigated.

“How much have you gained or lost in the past 12 months?” Copelin says. “With our clients, we review investments and balance the amount that is in money market accounts, U.S. stocks, international stocks and so on,” he says.

For most people, investing is synonymous with retirement planning, which is naturally an important component of a financial review.

Regularly evaluating your rate of savings and investment performance will allow you to adjust your plan. You may realize that extra savings or more aggressive investments are necessary to meet retirement goals.

Taxes make up another piece of a financial review: specifically, are there ways to pay less? Visit Bankrate’s tax center to pick up tips on everything from itemizing deductions to tax credits.

Professional financial planners also review estate plans during regular evaluations, “to make sure that nothing has changed that would indicate that their will should be altered,” says Copelin.

Though it doesn’t need to be done on a regular basis, checking the beneficiaries on retirement accounts can be invaluable, particularly if you’ve gotten married, divorced or had children since the last time you thought about those beneficiary forms.

Technology to the rescue

Financial reviews can be massive undertakings and eat up several hours with tracking down statements and forms and compiling the data. But technology can make the process easier — if you have 10 or so hours upfront to aggregate your financial life.

Chicago-based CFP Julie Murphy Casserly has found that people who frequently review their finances make use of software programs such as Quicken or websites such as Mint.com.

“Now all of their statements are uploaded into a system. You can pull your statements up once per quarter and say, ‘OK, that looks right and that doesn’t,’ and tweak what you need to,” she says.

No matter how it’s done — manually, digitally or some combination of the two — keeping each element of your finances organized and up-to-date will serve you well in the long run.