The United States is like a family that’s always arguing about something. Through all our differences, there’s one thing a lot of us agree on: America’s divided political environment is bad for the economy.

Two out of 5 people say the clashing culture in Washington is the biggest threat to the U.S economy over the next six months. It’s the No. 1 economic risk cited by every age, income, gender and ethnic group, and every political affiliation.

They have a point. The 2013 government shutdown was estimated to have cost at least $2 billion in lost economic output. Another government shutdown could happen this fall, after one was averted in early May. Having rainy-day money stashed in a money market account can help you through a rough patch. Or consider taking out a personal loan if you don’t have savings.

We’re the ones who pay

“Our survey indicates that many Americans feel they have a lot riding on what elected leaders do – or don’t do – in Washington,” says Mark Hamrick, Bankrate’s Washington bureau chief and senior economic analyst. “After all, it’s taxpayers who end up footing the bill and consumers who could stand to lose or benefit.”

Another 1 in 5 say the economy’s top threat is instability overseas.

No one can realistically predict the future. Make sure you’re prepared for the unexpected by having some emergency savings on hand.

Though America’s red-blue split is weighing on the minds of consumers, it was an even bigger concern before last year’s election.

Bankrate asked a similar question in September – two months before Election Day. Then, even more people were worried about politics: Three in 5 Americans said the outcome of the presidential race was the biggest threat to the economy. The No. 2 concern at that time was terrorism.

“While the election was resolved in the interim, the worries about the political impact on the economy were not,” says Greg McBride, CFA, Bankrate senior vice president and chief financial analyst.

Set aside savings in case political division deals you a setback. 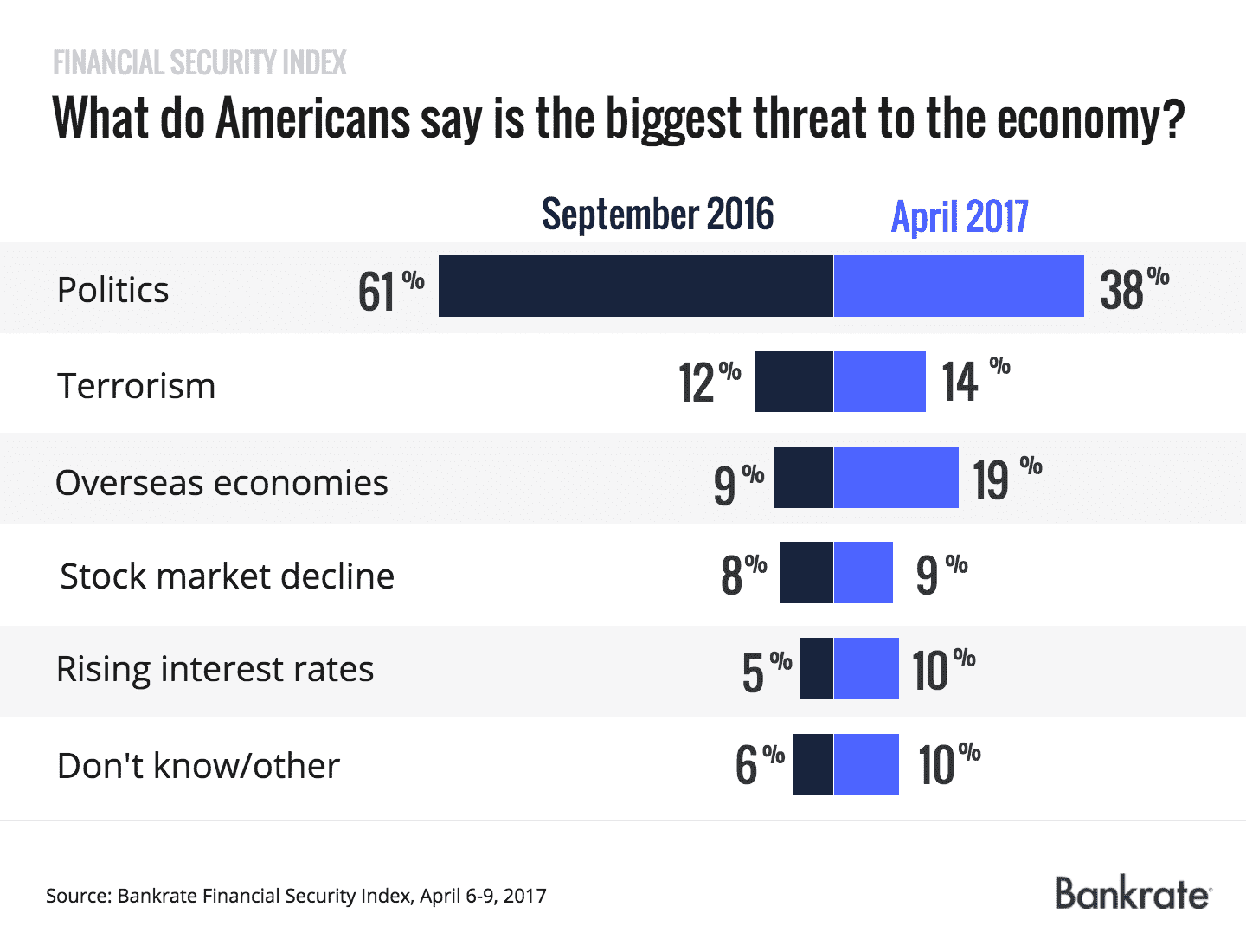 When you break out the responses by party, things look different. Republicans are a lot less worried about politics today than they were before the election, when Hillary Clinton was considered the favorite to win. Republicans still think the political environment is the top threat to the economy. But they believe overseas instability is almost as big a problem.

A strong dollar could be one result of global turmoil, making imports less expensive. Shop for an auto loan and get a good deal on a car. Also, a strong dollar can reduce the cost of overseas travel. Shop for the best airline and travel credit cards. 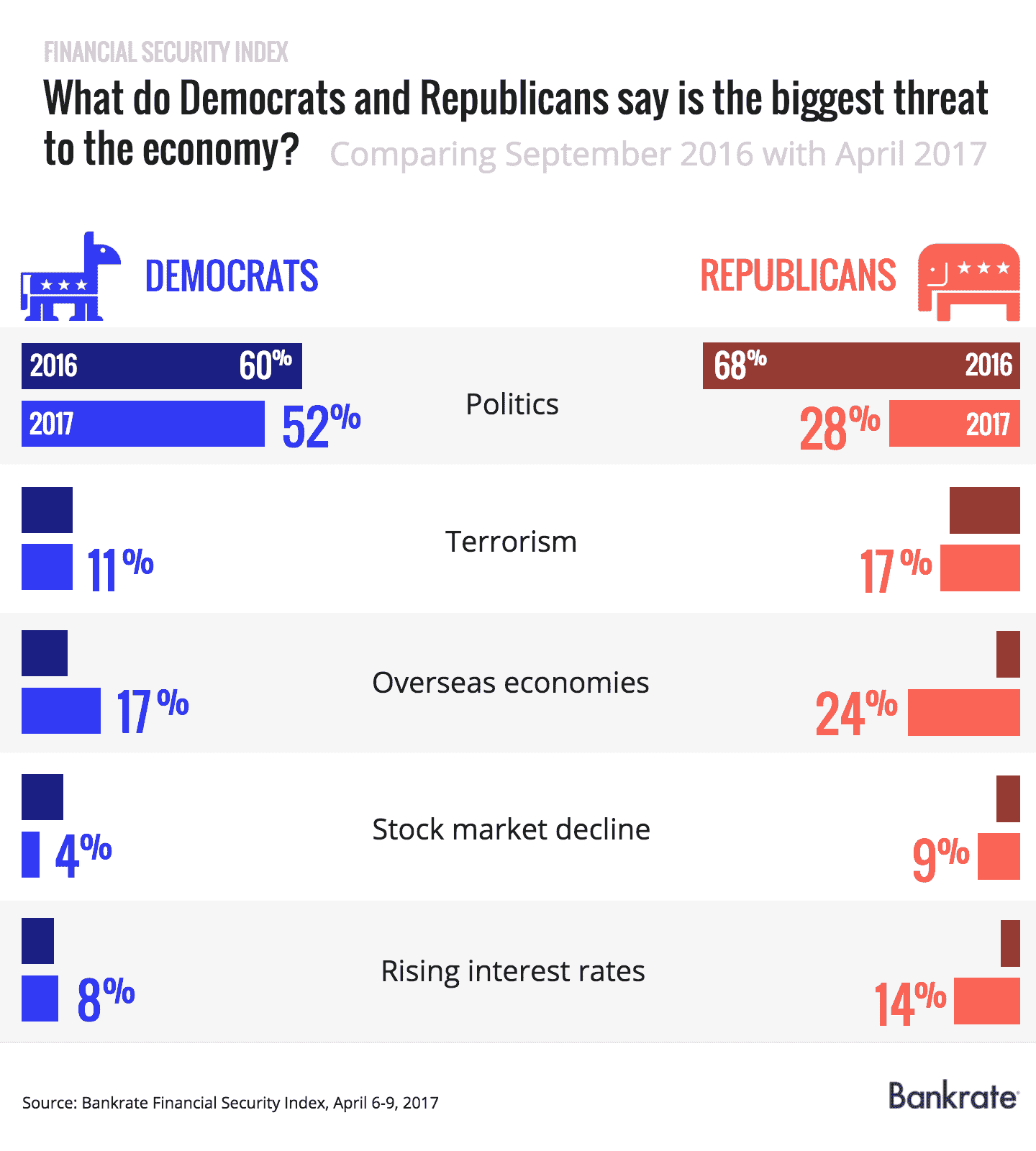 There are other dividing factors besides political party. Education is one: College graduates overwhelmingly say politics represents the main threat to the economy, while the responses of people with no more than a high school education are split almost equally among politics, overseas instability and terrorism.

Age makes for another difference. Younger millennials are more almost as likely to cite overseas instability as the political environment. Baby boomers worry more than other age groups about terrorism.

Even as millennials worry about instability overseas, they can embrace the stability of homeownership and shop for a low-down payment mortgage, such as a loan insured by the Federal Housing Administration.

Bankrate’s Financial Security Index for April has slid to 104.8 from last month’s record high of 106.5, but it’s still the third-highest reading in the past year. 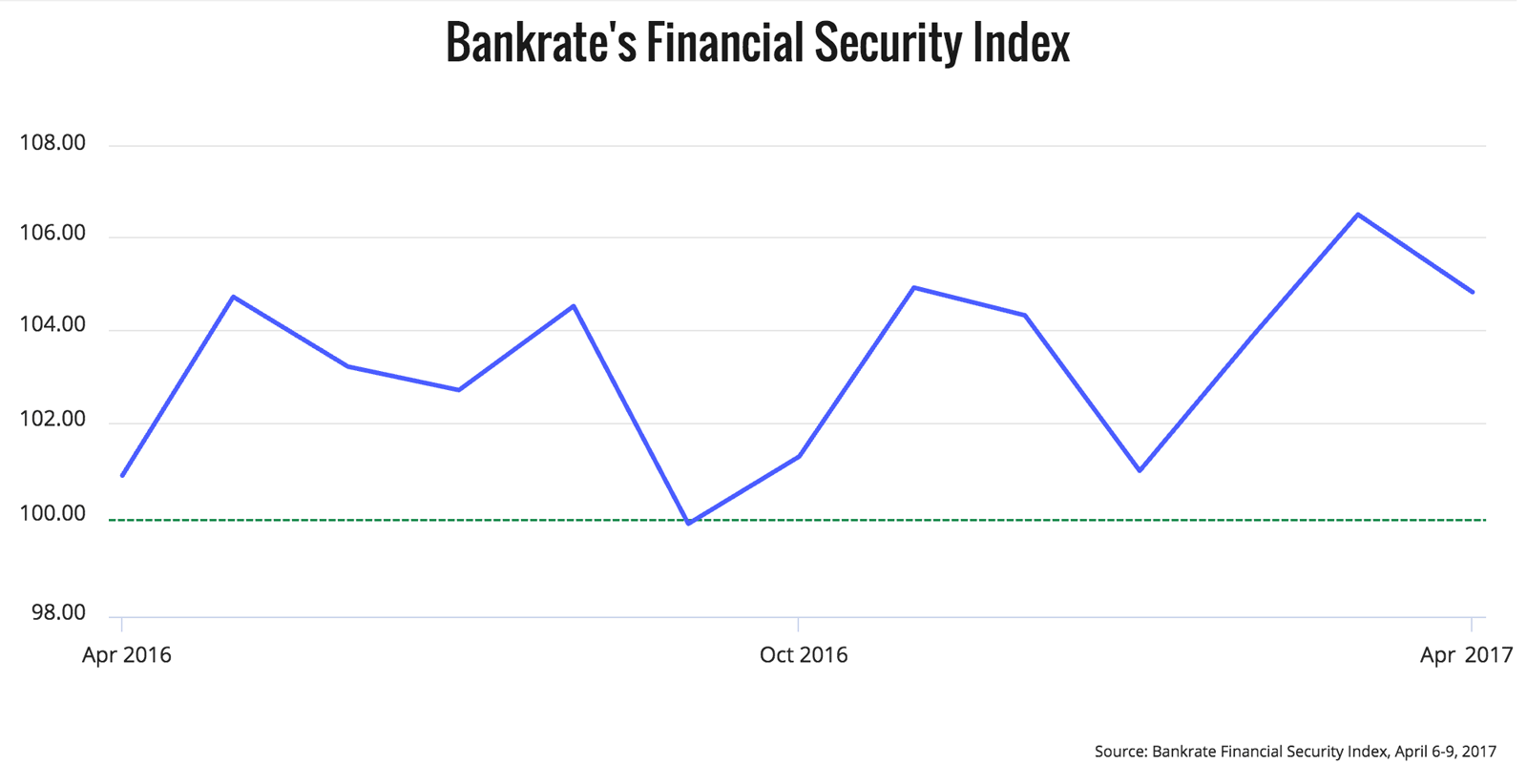 The savings component has slipped back into negative territory after turning positive in March for the first time in more than six years of surveying.

Both women and men feel better about their finances than a year ago, with men feeling particularly more upbeat.

The survey was conducted by Princeton Survey Research Associates International. PSRAI obtained telephone interviews with a nationally representative sample of 1,000 adults living in the continental United States. Interviews were conducted April 6-9. The margin of sampling error for the complete set of weighted data is plus or minus 3.8 percentage points.