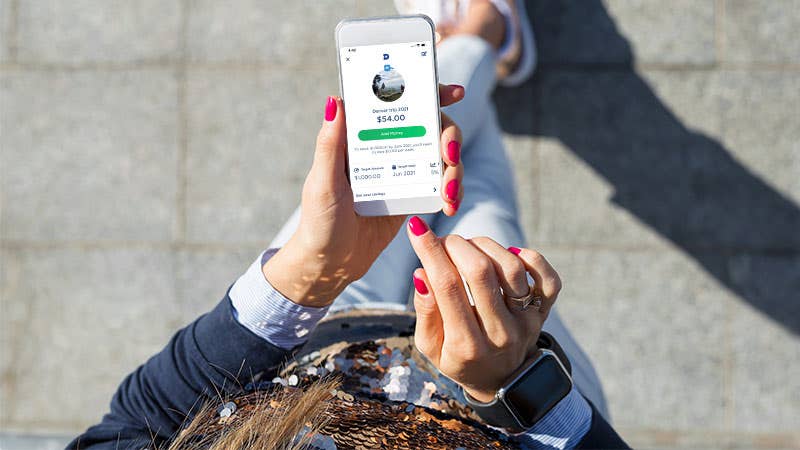 Fifth Third Bank’s Dobot started as a free tool to help young adults regularly save small amounts of money for their personal goals while parking their money at the Cincinnati-based bank. Now, the savings app also includes a striking feature that encourages you to save in pairs or groups for things like an upcoming vacation or an emergency fund.

The bank quietly rolled out the edgier feature with its stand-alone app in recent weeks. It’s designed to help keep people accountable to each other in order to up the odds of achieving their shared savings goals. The tool represents one of the latest ways a bank is wooing new customers by trying to improve their success at savings. It’s been a trend perking up in recent months.

Last year, U.S. Bank overhauled its app to include tools that alert customers to when the bank thinks they can afford to put something more into their savings, among other suggestions. Ally Bank, meanwhile, has been testing a tool that optimizes how much money their checking account customers can save and then transfers that amount for them and officially launched the features today. The list goes on. These efforts come at a time when millions of Americans say they couldn’t pay for a $1,000 emergency expense with their savings.

How Dobot’s Save Together feature works

When you use Dobot’s Save Together feature, it’s important to note that you’re not sharing a bank account — you’re still saving your dollars individually at Fifth Third Bank. Rather, you’re sharing information: In the app, you can view the progress others are making as a percent or as a dollar amount.

The ability to save together without needing to sign up for a joint bank account is an important distinction. There is some evidence that millennials prefer to have separate bank accounts from their partners more than past generations. The new feature could prove especially useful for pairs who want separate savings accounts without giving up the ability to see their partner’s progress made on mutual objectives, like saving for a honeymoon.

“What’s yours is yours, and what’s mine is mine, but we can still have the benefit of tracking progress and encouraging each other and/or holding each other accountable in a way that increases the chances that we get there, whatever there means,” says Andy Zurcher, who leads the team at Fifth Third Bank’s Dobot.

The idea of saving together via an app has precedent. Twine, for example, lets couples save together. Qapital, for another, lets users see friends’ progress made on their joint goals.

But it’s a rare feature in a bank-owned app. While it’s still early, Zurcher can see the tool evolving for broader use cases, such as the families on a youth soccer team leveraging it to save up for a group trip, for instance.

If it proves popular, it would represent a greater willingness of consumers to open up about their money habits a bit more — a topic that has managed to remain a taboo in a society increasingly sharing everything online. “It’s still a sensitive topic, but decreasingly sensitive as time goes on a little bit,” he says.

As he sees it, services like Venmo revealing who is buying what are among the reasons people are opening up more about their money.

But even if you like to share information, you may have good reason to keep your savings goal amount private. Picture a group of people who set up a shared goal to save up for a rainy day fund, for instance. Since it’s often recommended to save several months worth of your salary or income for this goal, it could prove uncomfortable for some finding out each other’s salary.

“That becomes a little bit weird if I see how much you’re saving for and I can do the math pretty quickly,” Zurcher says.

That’s just one reason of many why Dobot gives users the options to only display a percent rather than publish an amount.

How does someone get started with the new Save Together feature? After you have a free Dobot account, you will log in to the app and tap a button to invite your friends to join your savings goals. After they accept the invitation (and sign up for a Dobot account if they don’t have one), your goals are connected. Then, you can begin to track each other’s progress.

If you are motivated by peer comparisons, this feature could help you stay on track. But there’s no silver bullet to improving your financial health.