March is Women’s History Month, when we commemorate the ways women have played a vital role in history through their leadership and achievements.

The many areas where women have made strides during the past five decades include personal finance and banking. At the start of the 1970s, only 43 percent women were in the labor force, and women could be denied credit if there wasn’t a male co-signer. Events over the past half-century, however, have helped to greatly increase the financial rights of U.S. women. Here are several of these milestones through the decades, along with some expert advice for women on personal finance.

Up until the early 1970s, a woman’s application for credit could be denied if a husband didn’t co-sign, which often created obstacles for both married and single women. The Equal Credit Opportunity Act of 1974 changed this by prohibiting credit discrimination based on sex or marital status. The scope of the law was later broadened to protect people based on age, marital status, race, national origin or religion.

Those required to abide by the Equal Credit Opportunity Act include banks, credit unions, department stores and other lenders. This federal civil rights law made a “tremendous difference,” says Mike Sullivan, a personal finance consultant with financial education nonprofit Take Charge America. “Prior to the law, for car loans or financial transactions, a woman was expected to have someone — a father or husband, typically a male — co-sign for that transaction,” he says.

More substantial enforcement of the law began much more recently, however, Sullivan says, when the Consumer Financial Protection Bureau (CFPB) was created in 2011 to ensure banks and lending companies comply with the law.

In 1975, First Women’s Bank opened in New York City to cater to women customers and help foster equal opportunities for women in banking. Women’s rights activist and writer Betty Friedan was an organizer and director of the full-service bank, which also provided educational seminars for women. A handful of other women-focused banks opened around the same time throughout the country.

While women-focused and women-run banks have been few and far between, First Women’s Bank wasn’t the first of its kind, as a small number of U.S. banks made it a priority in the 19th and 20th centuries to help women utilize their products and services.

Women broke ground by taking on high positions in financial institutions toward the end of the 20th century. Rosemary McFadden became the first female president of the New York Mercantile Exchange (NYMEX) in 1984, making her the first woman to head any trading exchange in America.

As NYMEX president, McFadden was paid a six-figure salary, and her job was to oversee the daily operations of the exchange and make policy recommendations. By the time she left in 1989, the exchange’s volume of contracts had expanded to 34 million from 5 million.

The 1980s was a time when U.S. women earned college degrees in increasing numbers, securing slightly more than half of bachelor’s degrees awarded during the decade. Women also were awarded about half of the master’s degrees and roughly one-third of the doctorates given during this time.

Obtaining college degrees afforded women access to careers that had previously been unavailable to them, which also led to increased earnings, helping to narrow the income gap significantly over a decade. In 1979, women earned just 62.3 cents for every dollar men did, but by 1989, women’s pay increased to 70.1 cents for every dollar men earned, according to the U.S Bureau of Labor Statistics.

Soon after women made strides in education and the workforce in the 1980s, a groundbreaking law took effect that would help many keep their careers on track. The Family and Medical Leave Act, passed in 1993, enables covered employees to receive up to 12 weeks of unpaid time off for events like childbirth and newborn care, as well as caring for a spouse, parent or child with a serious health condition.

The passing of FMLA made it easier for women to remain in the workforce after having children, and by 1996, 60 percent of married couples had income from both partners, compared with just 44 percent in 1967. By the end of the 1990s, labor force participation by women peaked at 60.2 percent, and has remained slightly lower ever since.

Though record numbers of American women held jobs in the 1990s, the gender income gap was still prevalent by the end of the decade: Median earnings for men and women in 1999 were $61,402 and $44,402, respectively.

In 2009, a federal law was passed that strengthened protections for workers like women and other minorities against pay discrimination. Named the Lilly Ledbetter Fair Pay Act and signed by President Barack Obama, the law established that discrimination based on sex, race, color, religion or national origin will “accrue” whenever a paycheck is received that is deemed discriminatory.

By stating that wage discrimination claims can be filed up to 180 days after the last discriminatory paycheck was issued, the law increases the ability of employees to file claims in cases where they were not yet aware of discrimination when it occurred.

Other major corporations that had women CEOs in the 2000s include:

In addition to holding more senior positions in corporate America, women have made history in recent years by taking the helm of some government financial institutions. Economist and educator Janet Yellen became the first woman to lead the century-old Federal Reserve in 2014. Part of Yellen’s role during her single four-year term was to keep the country’s economic recovery on track after the Great Recession. (Yellen later went on to join President Joe Biden’s cabinet in 2021 as the first female Secretary of the Treasury.)

Data shows that families have been increasingly dependent on women’s earnings to survive. In the years leading up to the COVID-19 pandemic, two-thirds of women were either the sole breadwinner or a co-breadwinner for their households, according to the Center for American Progress.

The study showed that three-quarters of mothers of older children (ages 6 to 17) were in the labor force, while two-thirds of those with younger kids (under age 6) held jobs. Utah was the state with the lowest rate of breadwinning moms (1 in 4), whereas the District of Columbia had the highest rate (slightly more than half).

In addition to the persistent gender pay gap, women have some ground to gain regarding increasing savings and having an adequate emergency fund.

When it comes to saving money, women put away a higher percentage of what they earn than men, according to a Fidelity study, which found women save an average of 9 percent of what they earn each year, while men save 8.6 percent.

A higher saving rate doesn’t necessarily translate to women having more money in the bank than men, however, since women continue to earn less. While the gender pay gap has been gradually decreasing over the decades, women earned a median of 83 cents for every dollar men earned in 2020, according to an analysis of full-time workers by the Institute for Women’s Policy Research.

In addition to gender, the study also noted wage gaps across race and ethnicity. Compared to the median weekly earnings of white men, women of all races earned less.

Men are in better shape than women when it comes to having money saved for emergencies, with 27 percent of men reporting having enough saved to cover six months’ worth of expenses, compared with just 23 percent of women, a 2021 Bankrate survey found.

Data shows men are also slightly more likely than women to be fully banked, meaning they had a checking or savings account at a federally backed bank or credit union and didn’t rely on a payday loan or other alternative financial services. In the Federal Reserve Board’s Survey of Household Economics and Decisionmaking, 15 percent of men reported having relied on such alternative financial services in the past year, compared to 17 percent of women.

Steps you can take

Ways to increase your savings

Women of all incomes may find it difficult to save money these days because of factors like high inflation. “Whenever the costs of daily items are rising, it’s always a good idea to take a proactive look at two things you can control: Your income and your expenses,” says Cady North, CEO of North Financial Advisors. Her money-saving tips include:

Some couples choose to keep a portion of their money in separate savings accounts rather than pooling it all together, which is a strategy North recommends. “I teach all my clients that adopting a ‘yours, mine, ours’ approach allows each partner to keep some autonomy while keeping a transparent dialog about finances,” she says.

North proposes having each partner contribute a percentage of their income to joint household expenses and savings, and that additional money “can be put into separate accounts for you to enjoy how you like.”

Keeping some funds separate gives each partner the freedom to choose how they will spend their money on things like hobbies, gadgets, gifts for each other or self-care, North says.

During the past 50 years, women have made strides in gaining access to credit, higher education and more career opportunities. Further diversity, awareness and education can help even the playing field for women and other minority groups when it comes to banking and personal finance.

“The banking sector and financial services, generally, are still very male dominated,” says financial advisor North. “All banks would be able to better serve women customers if their teams were more gender and ethnically diverse.” 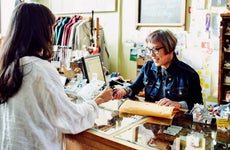 The history of women and credit cards 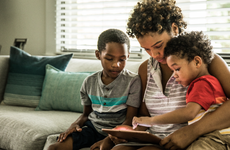 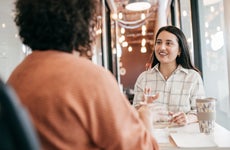 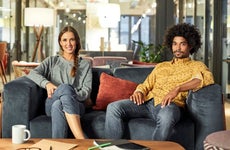