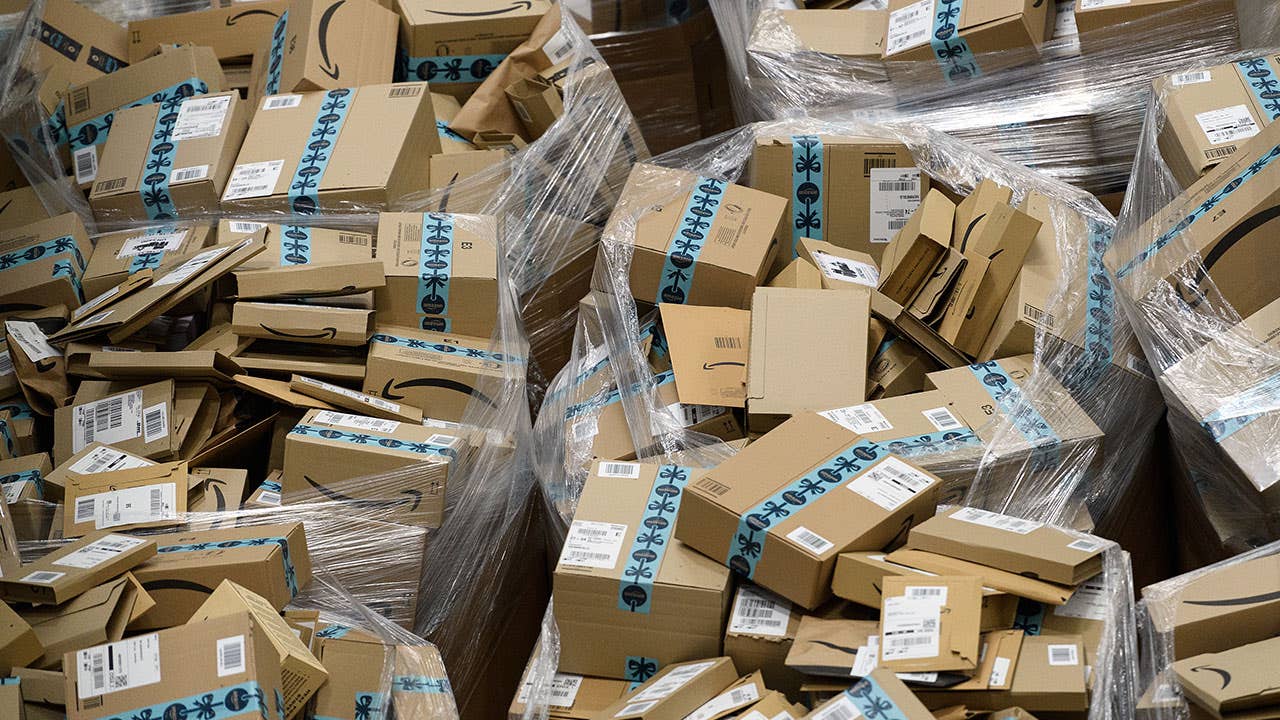 An Amazon checking account has yet to make its debut, but banks haven’t stopped shaking in their boots.

Nearly a year has passed since The Wall Street Journal let slip that Amazon was discussing the development of a hybrid-type checking account with banks like Chase and Capital One. Regulatory concerns have reportedly delayed the release of the product, and it’s hard to say whether we’ll ever see an Amazon-branded account backed by a bank.

Still, Amazon is considered a major predator in the financial services industry. It’s used regularly by hundreds of millions of customers, many of whom have already expressed interest in trying out new products if Amazon ever began to act more like a bank.

Banks big and small potentially have a lot to lose as more and more tech companies attempt to offer their own financial services. Consumers may have a lot to gain, but they too should proceed with caution when opening accounts offered by non-banks.

Tech giants are forcing banks to raise their game

Providing customers with better products and services has always been a core mission for financial institutions. But obstacles have kept banks from being more innovative; they often find themselves trapped by the limitations of their old-school systems and technology.

“All of them have a legacy platform that they have to deal with. And so, it’s very expensive and risky for a bank to sort of rip out their underlying plumbing, so to speak, and start from scratch,” says Raja Bose, consumer banking transformation leader at Genpact. “And so a lot of the innovation has been hampered to some extent by the fact that they have these legacy platforms that they’re dealing with.”

Competition from tech firms like Amazon, Facebook and Apple has forced banks to raise their game. Many of them have formed partnerships with startups and launched internet-only or mobile-first banking divisions, like Finn by Chase and Citizens Access.

Banks have also had to keep up with the evolving expectations of their own customers, says Emmett Higdon, digital banking director at Javelin Strategy & Research, who questions why he can’t send money to his daughter in college using the same kind of one-click checkout process that already lets him buy a TV online in seconds.

“Those are some of the expectations for convenience and ease of use that Amazon and others are setting for banking customers today,” Higdon says. “And it does leave customers wondering, ‘Why can’t my bank be more like this?’”

Why Amazon remains a threat

Amazon may not be poised to bring a checking-like product to market, but it has made its presence known in the financial services industry in other ways. It has introduced Amazon Pay and Amazon Cash, which lets you add cash to your account that you can use to shop online.

Customers can apply for Amazon credit cards, and small-business owners who use the Amazon marketplace may be able to apply for loans. And there’s already been talk of Amazon potentially getting into the mortgage business.

Its size and user experience have made Amazon not only a household name but also a powerhouse that will continue to offer useful financial services regardless of the fate of its own checking-like product, Bose says.

Another risk companies like Amazon pose to banks is that they could eventually “nibble away” at the banks’ business, leaving them primarily with the more highly regulated products and services that may not be as lucrative in the long run, says Jim Miller, vice president of the banking and credit card practice at J.D. Power. 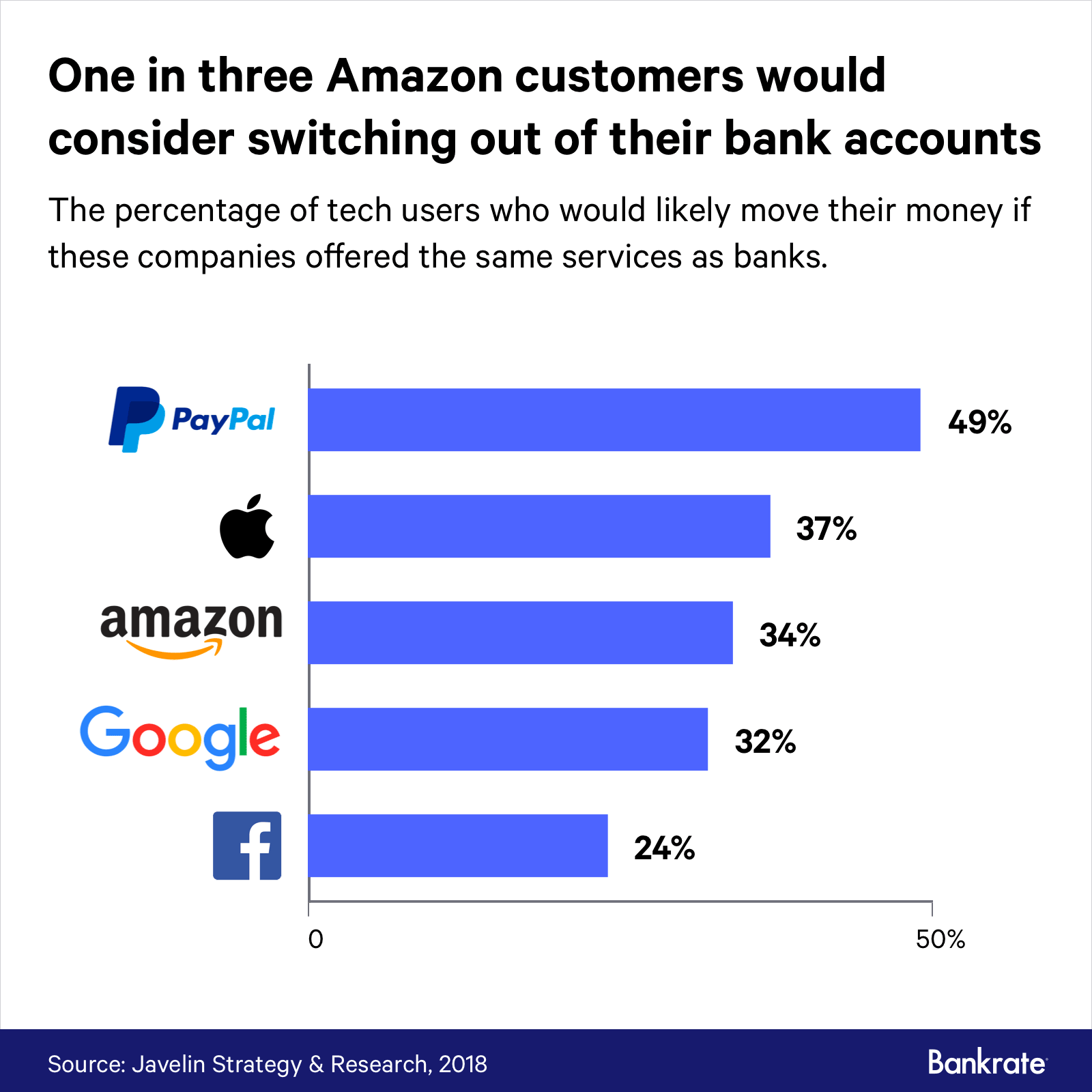 Consumers win — to a certain degree

Innovation has made certain services more accessible and has led to the creation of new digital features. And since everyone from Acorns to T-Mobile has begun offering banking products, consumers are left with more options beyond their standard run-of-the-mill accounts.

More choice is always better for consumers in the short term, Bose says. But he worries about the challenges consumers might face moving forward if they have too many financial services providers.

“If I can decide to conduct my financial transactions, so to speak, through multiple providers, that’s great and it provides me more options and therefore better pricing, better capabilities and features and functionality,” Bose says. “I do think, though, you might end up at a point where it becomes so dis-intermediated and decentralized that it becomes tougher for consumers to manage.”

With so much data being shared as new accounts are opened, privacy becomes another major concern for consumers.

Amazon may not be the biggest threat

In a recent report, Higdon questions whether PayPal could be a bigger threat for financial institutions than Amazon. While just 1 in 3 Amazon customers would be willing to open an account or switch from their primary bank if Amazon offered the kinds of services banks usually provide, Higdon found that nearly half of PayPal customers would be interested if PayPal offered the same services as their own bank.

But Miller notes that realistically, it’s difficult to get consumers to switch bank accounts. Few people make the switch unless they’re truly unhappy with their bank or there’s a promotional offer or a major life change that makes switching banks worth considering. And he questions why consumers would theoretically swap out their existing account for an Amazon-branded account when there are already so many “free” checking accounts to choose from.