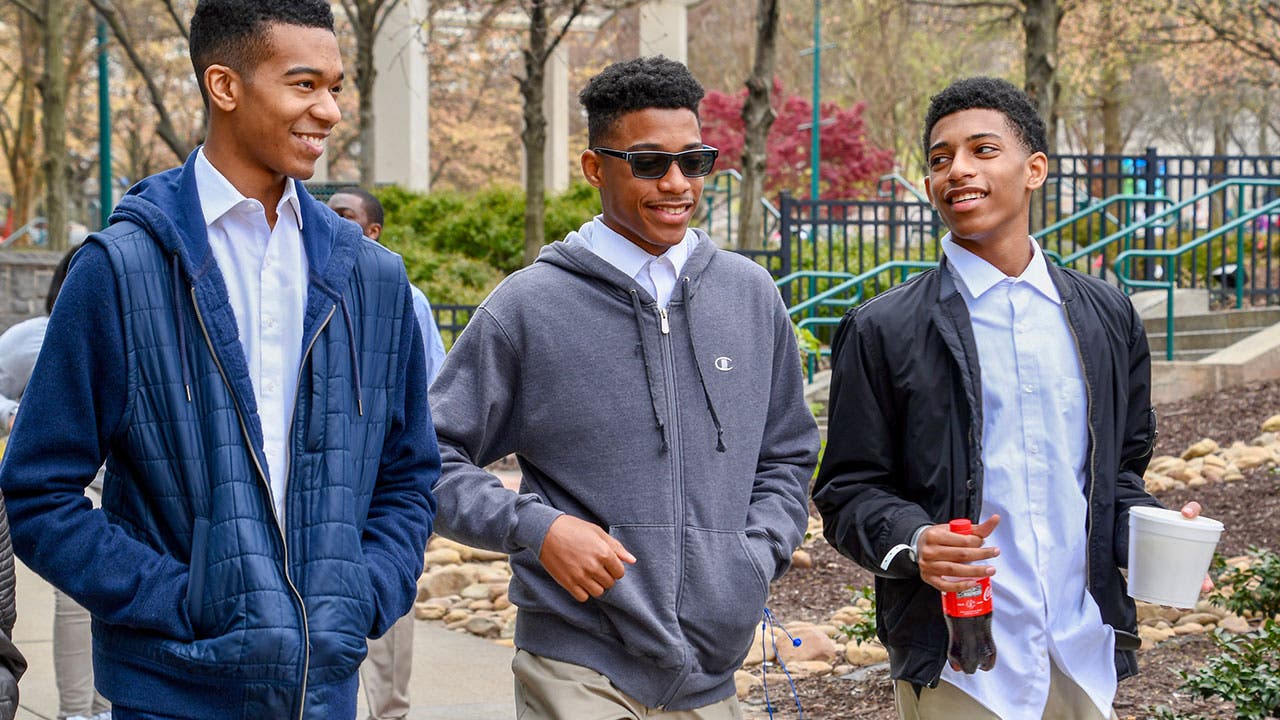 While Americans may not be so optimistic about their money overall, millennials continue to look on the bright side when it comes to their financial futures.

In a recent survey, Bankrate found that millennials are far more likely than any other generation to be optimistic about their finances this year. Nearly 60 percent of young adults reported that they expect their finances to improve in 2019.

Looking longer-term, Money Under 30 recently found that 78 percent of millennials were optimistic about their financial situation improving over the next five years, compared with just 45 percent of other age groups. 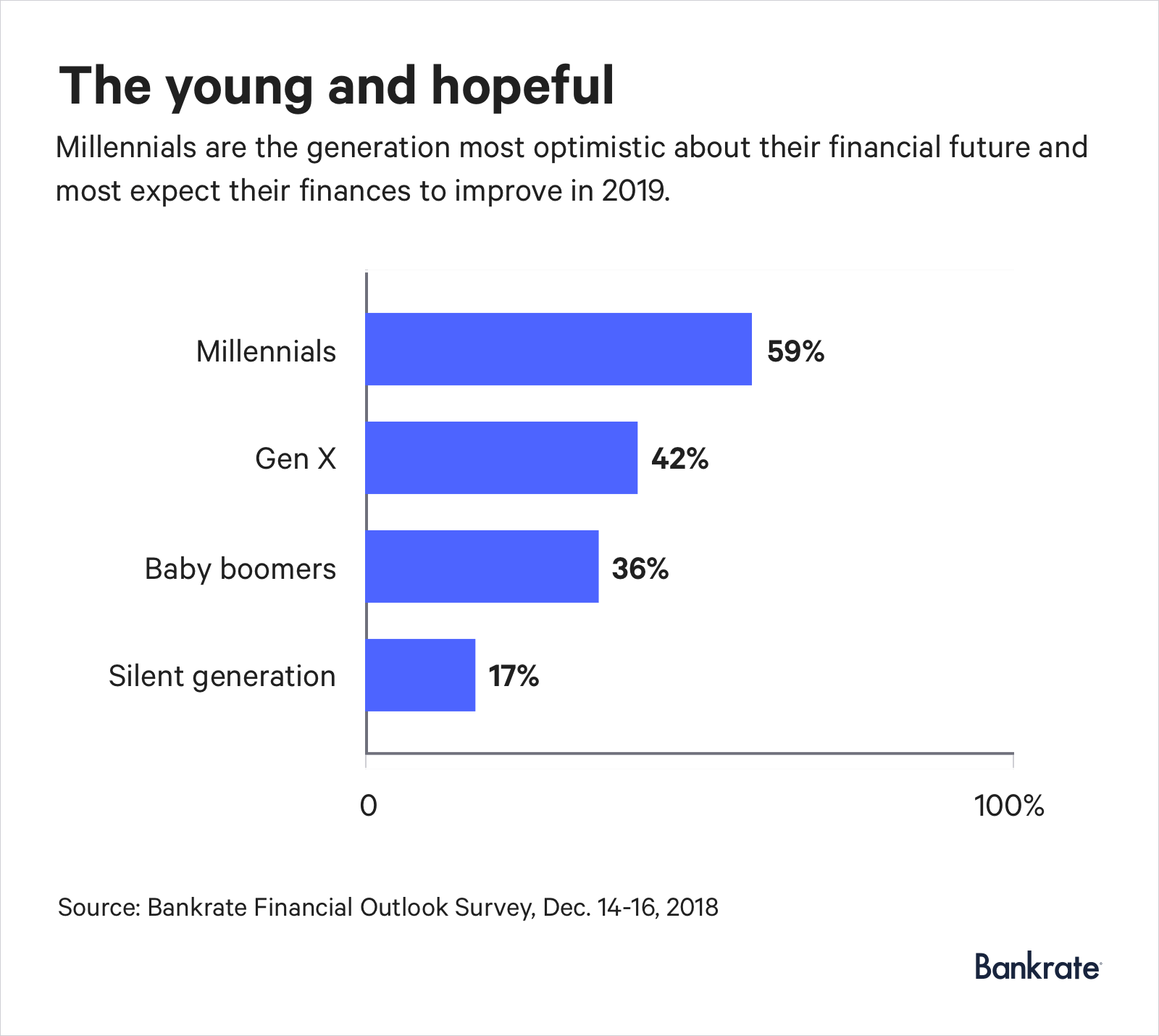 There’s a lot to be optimistic about: millennials are the group most likely to earn an increase in wages, they’re more financially engaged than any other generation and they’re the most likely to be saving for retirement.

But there’s no shortage of reasons for millennials to practice a bit of fiscal skepticism as well. Studies show that millennial optimism may be at odds with their preparedness and ability to reach financial milestones.

Optimistic millennials should recognize the behaviors that can cause them to lose sight of their goals and continue to work on the financial health they’ve accomplished so far. Like a patient who stops taking their medication once their symptoms are reduced, becoming overconfident and slacking off can lead to financial trouble later.

Millennials have reason to be optimistic

The top two causes millennials cited for their increased optimism this year were making more money at work (62.8 percent) and having less debt (32.5 percent).

In December, Bankrate found that millennials are the most likely to receive a raise in their wages, either by performance- or cost-of-living-based wage increases at their current job or by moving on to a new, higher-paying position.

And they’re on track to reducing debt. Northwestern Mutual’s 2018 Planning and Progress Study found that millennials are currently dedicating 34 percent of their monthly income towards their (largely student) debt.

“They know they need to save for longer-term goals, but they also save and invest to fund near-term passions like travel and life experiences,” Joe Vietri, senior vice president and head of Schwab’s retail branch network said in the report. “This focus on nurturing themselves as they age might be one explanation of why they are so engaged with their money.”

Overconfidence can lead to trouble

Millennials have made impressive progress, but they have a long way to go and should be wary of practices that could detract from their goals.

Allianz Life Insurance Company recently found that, while millennials are optimistic about their financial situations, they’re also planning to focus less on their finances this year.

“I think this is a tale as old as time,” says Paul Kelash, vice president of Consumer Insights at Allianz. “You create a better feeling of wealth and then you start spending and the money goes out your fingers faster than it used to.”

Even if you made progress last year, you shouldn’t backslide this year.

“What can often happen is you can start ignoring your goals,” Kelash says. “You start losing track of those short-, medium- and long-term goals. You set those goals first, but I always revisit those goals on a regular basis so that you know where your money is going but you’re also on track for those other goals.”

When strategic, persistent attention to detailed goals results in higher performance 90 percent of the time, according to historical data, directing focus away from your finances could be detrimental to achieving milestones like paying off student debt and saving for retirement.

The widening gap between millennials’ confidence and their actual financial knowledge may also create a false optimism that can impede progress.

In 2017, a study funded by the National Endowment for Financial Education found that there was a substantial gap between what millennials thought they knew about their finances and what they actually knew. While 69 percent of respondents gave themselves a high self-assessment of knowledge, just 24 percent exhibited basic financial literacy.

More specifically, Money Under 30’s survey found that 10 percent of millennials don’t know if they’re contributing to a retirement plan or not. Thirty-six percent don’t know their credit score, which is more than double the rate of the general population.

But many millennials are already working to close the gap, according to Allianz. In their survey, 47 percent of millennials, more than any other generation, said they want to get financial planning help this year.

“They have the strongest interest in financial advisors and working with someone,” Kelash says. “I think that’s a really, really positive thing.”

Not only can a financial advisor help you learn about best practices and money management, he or she can work with you to develop an actionable plan to reach your goals over the next year, five years and beyond.

Other things to keep in mind

As they work toward financial goals in 2019, “The biggest threat to millennials will be the social media version of keeping up with the Joneses that they’re still subject to,” Kelash says.

Allianz’s survey showed that 31 percent of millennials still say they’re spending too much. Budgeting better was among millennials’ highest financial priorities this year in Bankrate’s survey. A few dollars here and there this year may not seem like much, but repeated often over the years these sums can inhibit your long-term spending goals.

Beyond budgeting, young adults said their top financial priorities are continuing to pay off debt (28.2 percent) getting a higher-paying job (12.9 percent) and saving money for emergencies (11.8 percent).

“There’s a danger in making a long-term goal so large and so overwhelming that you get frustrated,” Kelash says.

Start tracking your spending before restricting your budget. Focus on paying off one debt at a time, starting with those accruing interest at the highest rates. Set a $1,000 savings goal before you work towards building your full emergency fund of three to six months’ living expenses.

Optimism is a great motivator, but it needs to be paired with a healthy knowledge base and plan of action for millennials to achieve the goals they’ve set in place this year.