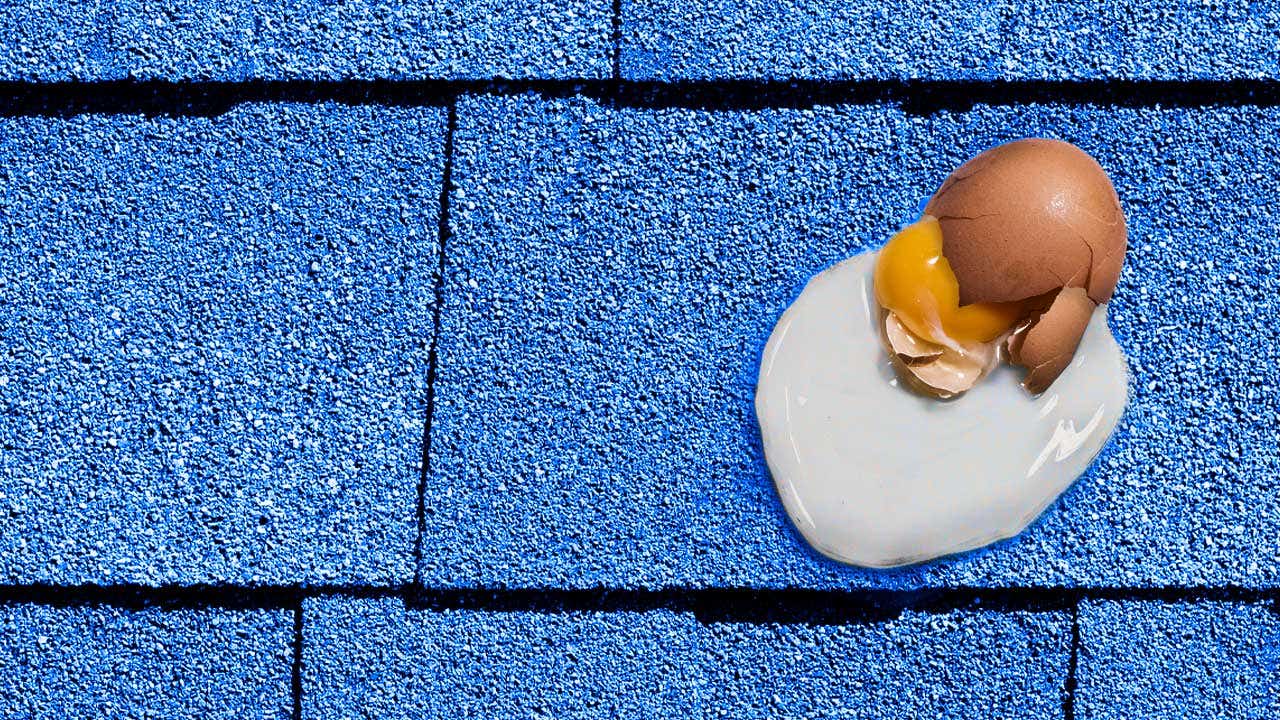 Homeowners across America love their homes, and they’re continuing to spend up for them, even at the cost of saving for retirement, according to a new Bankrate survey.

As part of its survey, Bankrate asked 2,177 U.S. adult homeowners whether their home equity is more or less than their retirement account balance. The survey also asked 1,232 U.S. adult mortgage holders about what, if any, negative impact their mortgage payments have on their ability to save.

While homeownership is a goal for many Americans, the Bankrate survey shows that it can create financial issues not only for retirement but also in other areas, if not managed correctly.

“Big mortgage payments take a bite out of your monthly income but are also a major obstacle to saving for retirement, emergencies, or other financial goals,” says Greg McBride, CFA, Bankrate chief financial analyst.

For example, taking on a bigger mortgage than you can afford could hurt your ability to use special tax-advantaged accounts such as a 401(k) or IRA that can improve your financial future.

“Homebuyers, beware of biting off more than you can comfortably chew and locking yourself into payments that make it difficult to save,” says McBride.

Who’s most affected by mortgage burden

This latest findings seem to reinforce a November Bankrate survey showing that Americans are having a hard time saving for retirement. The effects of homeownership on saving seem to be much the same across income and age groups, with only modest differences.

Among all homeowners, about 39 percent have more equity in their home than money in retirement accounts such as a 401(k) or IRA:

One surprising finding of the Bankrate survey: These figures are nearly the same whether the homeowner had a mortgage on the property or owned the home outright.

Some 77 percent of mortgage holders overall say that their mortgage negatively impacts their ability to save for retirement, and the numbers fall in a tight band regardless of income:

So even a higher income is not offsetting the ability of a mortgage holder to afford the payments and not negatively affect their savings.

By age, the situation looks similar, though older groups have a somewhat lesser problem saving due to a mortgage:

The negative impact of a mortgage on a borrower’s ability to save declines somewhat above age 55, but even among the oldest group of respondents, no fewer than two-thirds say their mortgage has at least some negative impact.

Homeowners’ home equity exceeds their retirement balance at every age group, but the gap between the two narrows as borrowers get older. 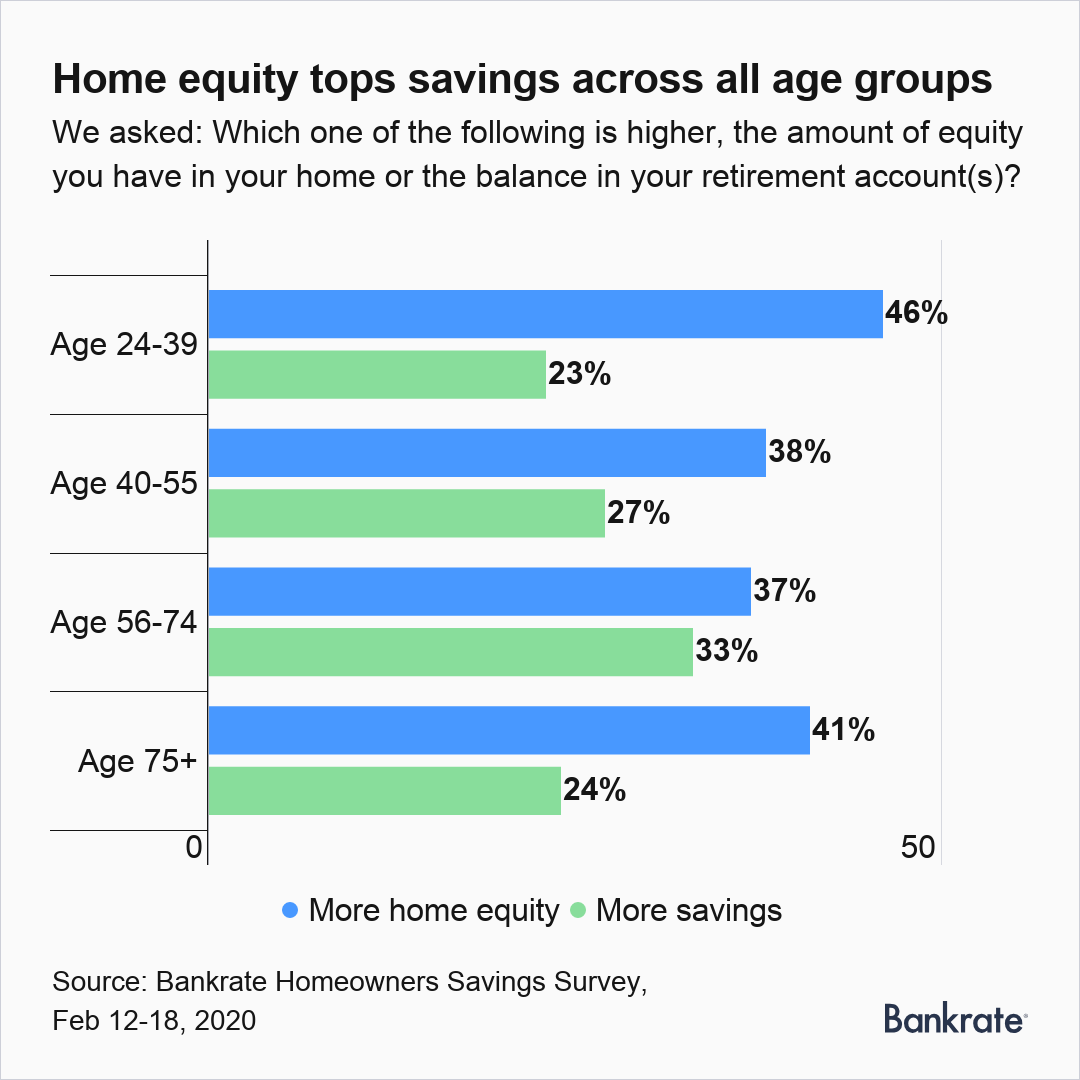 Among those aged 40-55, about 38 percent say they have more equity in their homes, compared with 27 percent who say their account balance is higher.

Only among those over age 75 does the trend reverse, with 41 percent of respondents saying they have more home equity, compared to 24 percent who say they have more savings.

Meanwhile, between 18 and 22 percent of each age group don’t know whether they have more in home equity or in their retirement accounts. 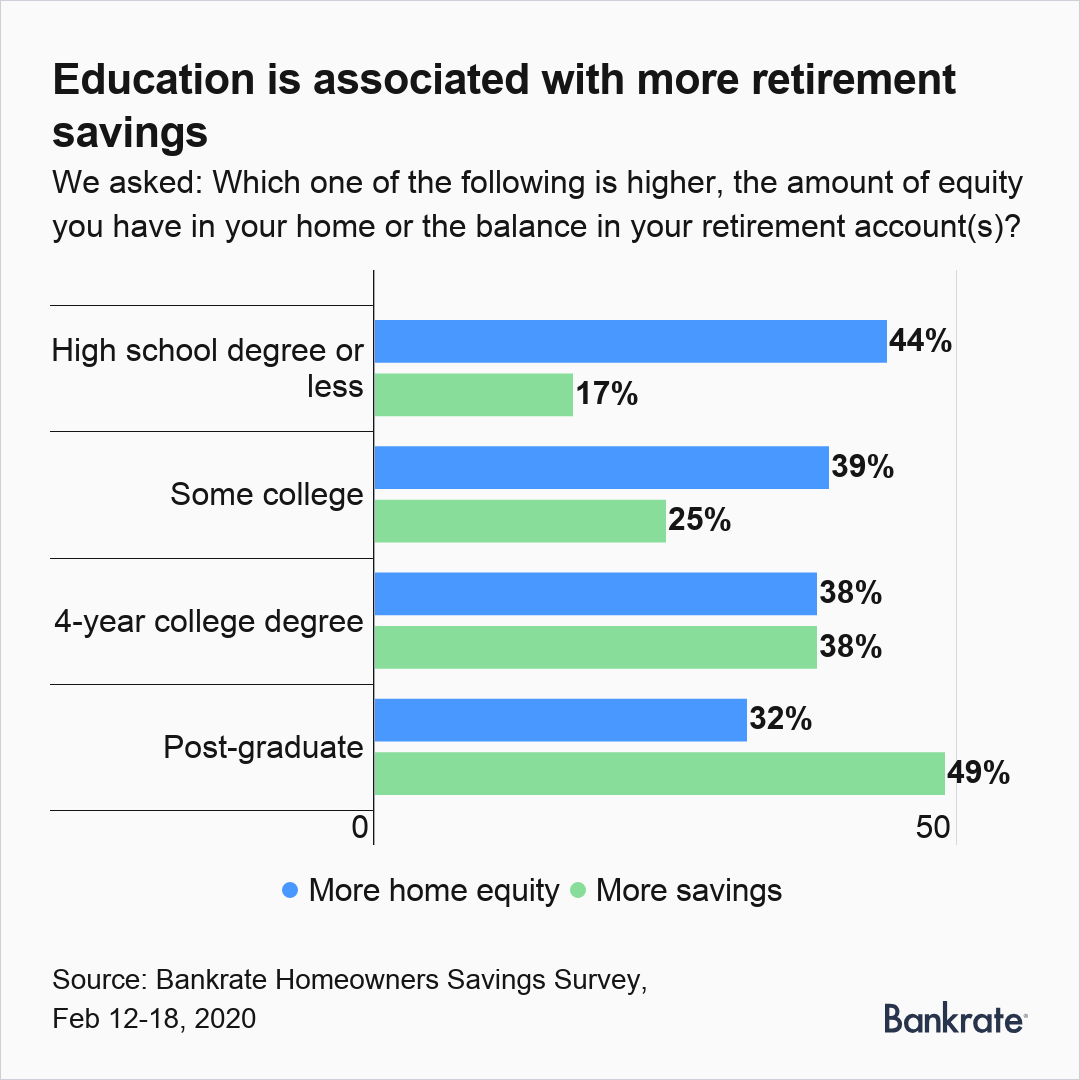 The trend remains consistent as a mortgage holder’s education increases:

Those with no high school or only a high school degree said they didn’t know their relative balances at a greater rate (28 percent) than other categories: some college (20 percent), a four-year degree (13 percent) and a postgraduate degree (8 percent).

What can mortgage holders do?

A home can be a great source of “forced savings” by building equity but it’s vital to your financial health that you have liquid money set aside for emergencies, everyday expenses and retirement.

Yet there’s good news for those who have a mortgage that’s slowing their savings rate. Now is ideal for homeowners to improve their financial situation without having to sell their homes, as interest rates plummet.

The first step to improving your financial situation is determining where you stand.

“One in five homeowners don’t know whether their retirement account balance is more or less than what they have in home equity, a possible disconnect to their own finances,” says McBride.

If you don’t know what you’re saving or where your mortgage stands, it’s going to be difficult to fix them. So start there and assess your financial situation, and determine how you might improve, either through a budget or more determined saving or another approach.

You can also start to figure out if refinancing your mortgage makes financial sense for you, by running the basic numbers through Bankrate’s mortgage calculator.

2. Refinance while rates are low

Once you’ve figured out your financial situation and see whether it’s a smart money move, you’ll want to act while rates remain low. Currently mortgage rates are among the lowest they’ve ever been, as the novel coronavirus spreads fear among investors, pushing rates lower.

“Homeowners can look at refinancing at a lower rate to shave their monthly payments and open an avenue to increased savings,” says McBride.

These low rates may not last forever, so it’s important to act if a refinancing can work for you.

3. Then save for your needs

Once you’ve secured some extra savings from a refinancing, it can be easy to spend that money on everyday items rather than saving and investing it for retirement. But stay focused.

By locking in a low rate for 15 or 30 years, you have the safety of a fixed and low-cost mortgage payment. However, with a low rate, don’t be too eager to pay off that mortgage as fast as possible.

“Don’t neglect retirement savings in a hurry to pay down or pay off a low rate mortgage,” says McBride.

That may sound counter-intuitive, because people instinctively don’t like debt hanging over them. But it can make good retirement sense.

“Money in a retirement account will pay the bills, home equity will not,” says McBride.

By keeping a low-cost mortgage outstanding for longer, you can take the money savings and increase your emergency funds as well as your retirement account and not have those funds locked up in your house, where it can be harder to access. Liquid assets can also bail you out if you encounter tough times and need to make some mortgage payments, for example.

This study was conducted for Bankrate via online interview by YouGov. Interviews were conducted from February 12-18, 2020 among a total sample of 3,942 adults. Data are weighted and are intended to be representative of all U.S. adults, and therefore are subject to statistical errors typically associated with sample-based information.