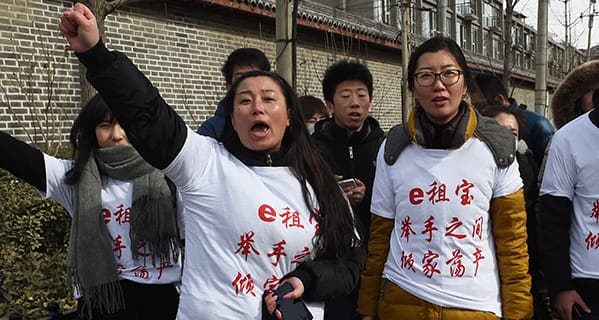 The peer-to-peer lending market is under pressure in China after 21 people were arrested in association with a P2P Ponzi scheme.

The company’s largest peer-to-peer lending service, Ezubao, is accused of scamming around 900,000 investors out of 50 billion yuan, or about $7.6 billion, according to Reuters.

Launched in 2014, Ezubao is 1 of China’s biggest P2P services. In exchange for personal loans, it promises high returns to investors.

But its founder Ding Ning reportedly was working a Ponzi scheme, using new investors’ capital to pay off old investors and to fund real estate projects, according to Yinhua News Agency.

Ding Ning admitted to Xinhua that 95% of Ezubao’s projects were fake. And in addition, he used some of the company’s capital to purchase lavish gifts like a villa in Singapore and a pink diamond, Yinhua reported.

Police said they have sealed, frozen and seized the assets of Ezubao and its linked companies to further investigate the lending platform.

China has 3,800 registered P2P lenders, and according to industry estimates over a third have run into financial difficulties, notes the Financial Times.

But not all P2P lending platforms are up to no good.

“The majority of P2P firms are trying to do the right thing,” Joe Zhang, a veteran P2P business owner and executive told the Financial Times.