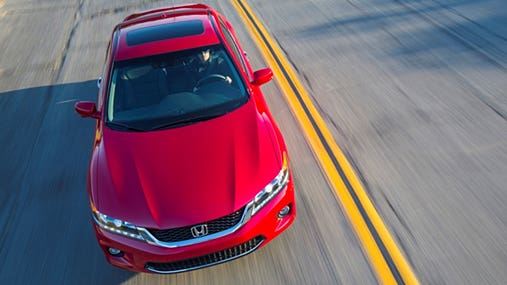 It probably won’t come as a surprise that when gas prices go up, car buyers shift their purchases to more fuel-efficient cars. What might surprise you is that the cars they buy instead are smaller gasoline cars and not hybrid cars, according to a study from Experian Automotive released in February. That study found that for every $1 increase in gas prices, there is a 0.7 percent increase in small-car sales while sales of hybrids increase by just 0.2 percent.

For our calculations, we looked at the midsize Honda Accord sedan, one of the top-selling cars, and compared it to the Toyota Prius, the top-selling hybrid, and the Ford Focus, one of the hottest-selling small cars. For the purposes of our comparison, we chose the most fuel-efficient versions of each model with automatic transmissions and used the fuel-economy data from the Environmental Protection Agency and its calculator, using the data for the average American driver with the average gas prices at press time.

Where things really get interesting is when you factor in the costs of the cars. For our calculations, we chose a five-year, new-car loan at 4.11 percent, the current national average at press time, according to Bankrate’s Interest Rate Roundup for auto loans for March 8 . Because the Prius costs $1,700 more than the Accord, much of the gas savings are eaten up by the additional cost in principal and interest on the car loan. On the other hand, the Ford Focus costs $3,295 less than the Accord, so a car buyer will save in principal and interest on the car loan, and in gas costs.

As a result, when you factor in the car costs, choosing a more fuel-efficient, gasoline-powered small car is a wiser financial choice over choosing a more fuel-efficient hybrid, even one that is priced very reasonably. Over five years, the Ford Focus will cost $4,900.77 less than the Honda Accord, while the Toyota Prius represents a $2,094.29 price difference — much smaller though still significant.