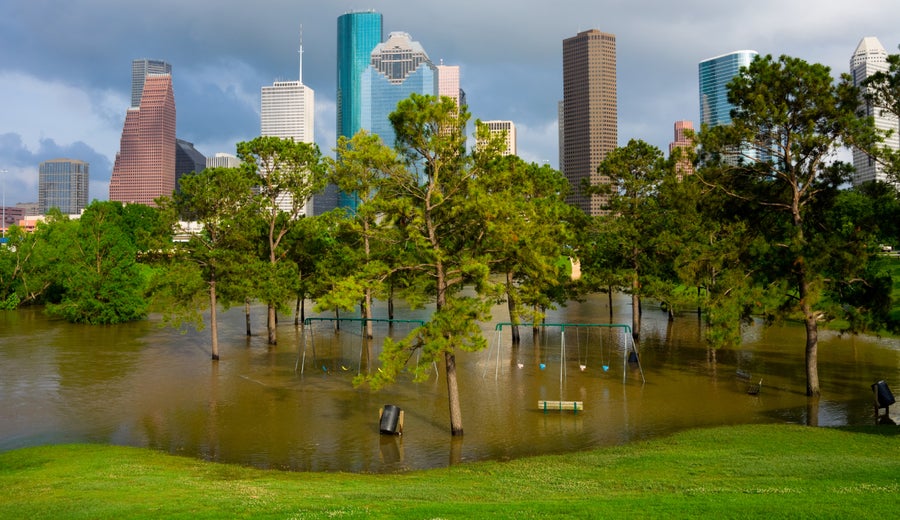 Flooding in Texas is incredibly common. Every year, Texas gets hit with hurricanes and other major storms that cause extensive flood damage. Although homeowners insurance does not cover flood damage, Texas homeowners can purchase a standalone flood insurance policy for protection.

Over the last decade, Texas has seen some of the worst hurricanes in recent history. In 2017, Hurricane Harvey caused roughly $125 billion in damage in the southern part of the state. The storm dropped 50 inches of rainfall and completely flooded one-third of Houston’s land area.

Data from the Federal Emergency Management Agency (FEMA) shows that flood events are most common along the Texas coastline, in the southern region and in the Dallas area. Almost every part of Texas is somewhat susceptible to flooding, which means homeowners across the state should consider flood insurance.

Cost of flood insurance in Texas

According to the Texas Department of Insurance, the average flood insurance policy costs $700 per year. Residents who do not live in high-risk flood zones can usually purchase a policy for less than $500 per year. There are also options for renters who want to protect their personal property from flood damage.

However, not every homeowner pays the same amount for their insurance. A variety of factors can impact a premium, like the home’s specific location, the value of the home and the value of the belongings inside the home. A homeowner’s credit score and claims history can also affect their flood insurance rate, depending on the state.

Insurance experts urge Texas residents not to wait until a storm is on the horizon to purchase a flood insurance policy. Residents who live in an area where flooding occurs should buy a policy as soon as possible. Storms are unpredictable and can hit at any time.

How to purchase flood insurance in Texas

The most common option is to buy a policy through the National Flood Insurance Program (NFIP). NFIP is a government-run insurance program that covers homes in high-risk flood areas. NFIP flood insurance includes dwelling coverage up to $250,000 and personal property coverage up to $100,000.

With NFIP insurance, the insured is reimbursed for losses on the basis of actual cash value (ACV). That means the depreciation is factored into the payout. For example, if a home was purchased for $300,000, and a flood insurance claim is filed 10 years later, the homeowner might only get $200,000 for repairs.

To buy NFIP flood insurance, search for a participating provider in Texas. Contact the company and inquire about flood coverage, and an agent will walk through the process and explain what is and is not covered. Once the first month’s premium is paid, coverage will take effect after the 30-day waiting period.

There are pros and cons to getting private flood insurance. For one, it is usually more expensive than NFIP insurance. However, the coverage limits are often higher and there may be more flexibility with the policy. Additionally, private flood insurance typically includes replacement cost value (RCV) for the home and personal belongings, which means any damage is paid for at the original value.

Before deciding on private flood insurance, research what is required to qualify for coverage. For instance, homes located in very high-risk areas might not be eligible for private insurance. In that case, NFIP insurance might be a good option.

To get private flood insurance, research providers that offer this type of coverage in the area where the home that needs flood insurance is located. Keep in mind that many private insurance companies sell NFIP policies, while other providers underwrite their flood insurance policies and assume full risk in the event of a flood claim.

How much does flood insurance cost?

The cost of flood insurance varies based on a few factors. The average cost of an NFIP policy is $700 per year. Private flood insurance usually costs more. However, factors like the home’s location, the age of the home and the applicant’s credit score and claims history can affect the rate.

Does flood insurance include loss of use coverage?