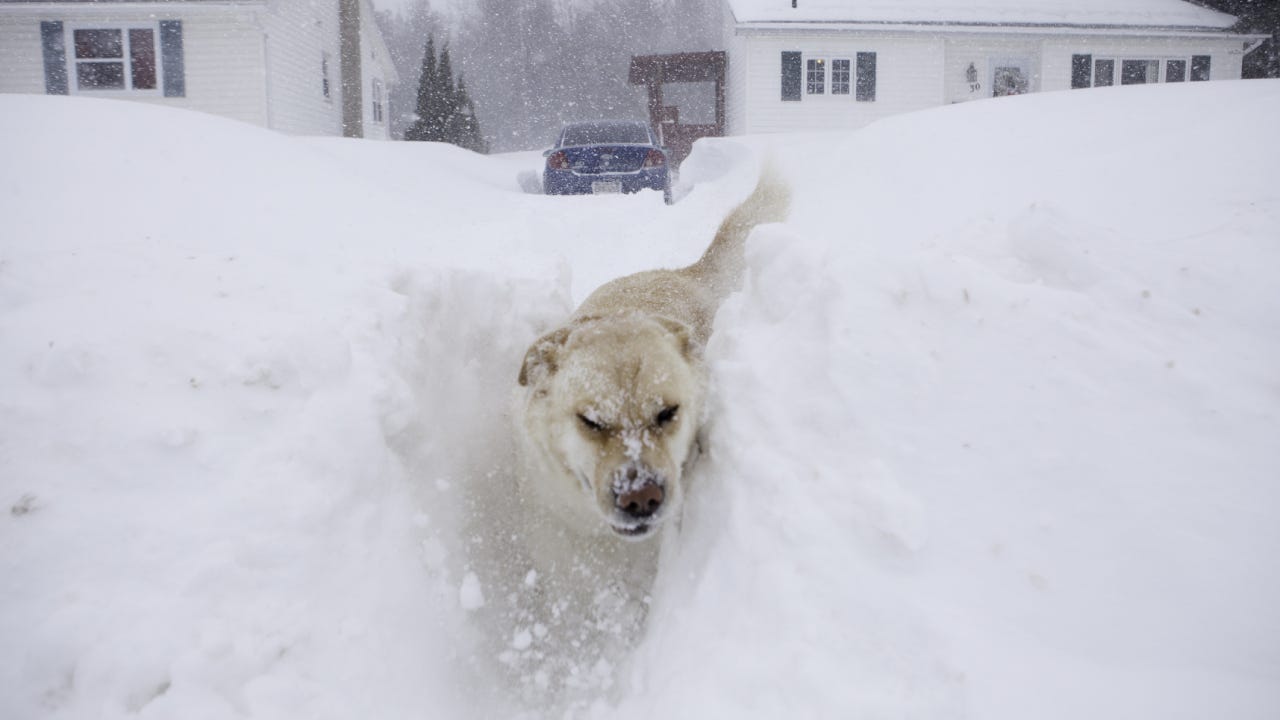 Winter might not be the season you think of first when it comes to damaging storms, but the colder months can produce powerful weather systems that cause just as much damage as summer storms. La Niña atmospheric conditions are in place for the 2021 winter season, which means that some regions of the country could be warmer and drier than usual and other areas could be colder and wetter. A winter storm could mean heavy snow, damaging ice, cold temperatures and widespread power outages. Bankrate explores the most expensive winter storms in U.S. history to help you understand the potential damage these storms can cause and know how to prepare to mitigate your risks.

The damage caused to homes by winter storms

The four main types of winter storms, including blizzards, ice storms, lake-effect storms and snow squalls, are characterized by snow, wind and cold. Watching the snow falling outside can be relaxing, but winter storms can be large and severe enough to do extensive damage.

A devastating ice storm in the Southern U.S. in early 2021 has already pushed this year’s winter-related insured losses over $15 billion in property damage. The extreme weather conditions caused by winter storms can cause a variety of damage to your home and vehicles: Winter storms frequently cause billions of dollars in damage each year, according to the Insurance Information Institute (Triple-I).

The following 10 winter storms are currently ranked as the most damaging on record (property loss amounts are updated to reflect 2020 dollars):

The Storm of the Century

Due to its record-breaking intensity, the Storm of the Century began on March 11, 1993, and lasted for three days. The storm, which formed in the Gulf of Mexico, managed to shatter records with its combination of snowfall, high winds and coastal flooding across the Eastern U.S. There were 270 reported fatalities, and the storm caused around $3.6 billion in damages.

The February winter storm of 2015 led to 39 reported fatalities and an estimated $2.3 billion in damages in New England. Tropical-storm-force winds, combined with extreme snowfall and dangerously low temperatures, created an intensely dangerous storm.

This storm affected the majority of the U.S., caused 500 fatalities and cost nearly $2.2 billion in damages. With impacts ranging from Florida to Montana and New Jersey to Idaho, it was one of the biggest storms by geographic area in our nation’s history.

April is late for a winter storm, but snowfall in this spring month isn’t unheard of in many parts of the country. In mid-April 2007, a storm caused heavy snowfall, tornadoes and flooding on the East Coast. Unfortunately, the devastating storm caused 19 people to lose their lives and the damages totaled just over $2 billion.

The January winter events of 2014, characterized by extreme cold and heavy snowfall, led to nearly $1.9 billion in damages. More than 20 states were directly affected.

The December winter storm of 1992 caused more than $1.8 billion in damages and resulted in 19 fatalities. It formed over Virginia on December 10 and lingered over the Mid-Atlantic for an additional two days.

The March winter storm of 2018 led to nine fatalities and more than $1.6 billion in property damage as it targeted the Mid-Atlantic and New England regions. The storm, a combination of a front colliding with a low-pressure system, led to extensive snowfall and flooding in the affected areas.

A powerful type of winter storm that forms over the Atlantic Ocean, called a nor’Easter, hit New England in March 2010, causing 11 fatalities and over $1.4 billion in damages. Extensive snowfall combined with high winds and severe flooding to create a variety of hazards.

A winter storm and cold snap settled over New England and the eastern Midwest January 17-20, 1994. Tragically, 70 people lost their lives, and the storm caused $1.4 billion in damages.

The February winter events of 1994 generated $1.4 billion in damages and nine fatalities. Extensive impacts caused by snowfall, wind, hail and ice primarily affected the Midwest and portions of the Mid-Atlantic.

What your insurance covers during winter storms

Winter storms can be dangerous, damaging and even deadly. Knowing how to prepare is essential for the safety of you and your family. You’ll likely want to keep non-perishable foods on hand (and a safe way to cook them) in case of a power outage; you should also know how you’ll keep warm. Understanding what your home insurance policy covers if you sustain damage can help you better prepare for potential insurance claims. Standard home insurance policies include the following coverage types that provide you with financial protection after incurring winter storm damage:

Remember that claim payouts are subject to your home insurance deductible. Your deductible is the amount of a loss that you are willing to pay for out of pocket in the event of a claim and is subtracted from your insurer’s claim payment. Most standard home insurance policies have at least a $500 deductible. Some companies use a percentage system, whereby your deductible is a percentage of your dwelling amount. Choosing a higher deductible can reduce your premium, but it means you will need to pay more out of pocket for a covered loss.

The best home insurance company is the one that most closely fits your needs. Some homeowners may be looking for specific optional coverage types; some might value a user-friendly mobile app where you can file and track claims, and others might want the cheapest home policy possible based on premium. If you’re shopping for coverage, make a list of your needs and get quotes from a few different companies to compare costs and coverages.

What types of insurance can help with winter storm damage?

Standard home insurance policies include dwelling coverage, as well as other structures, personal property and additional living expenses coverages, all of which can be beneficial if you incur winter storm damage. To further bolster your protection, you may want to add some optional coverages, like food spoilage and roof replacement cost.

Where do severe winter storms strike most often?

Winter storms can happen anywhere, as evidenced by the incredibly destructive storm that hit Texas and other Southern states in early 2021. However, the Northeast typically incurs more impacts from severe winter weather than other regions of the U.S. Not only are Northeast states generally colder than Southern states throughout the winter months, but their position generally east of the Great Lakes can contribute to heavy lake-effect snowstorms.

Does my auto insurance cover winter storm damage to my car?

Vehicle crashes between two or more drivers caused by snowy and slippery roads are covered by liability insurance, which is required by most states. A car that crashes into an object would generally be covered under the optional collision portion of an auto policy. Physical damage to a vehicle caused by heavy wind, flooding or fallen ice or tree limbs is covered under the optional comprehensive portion of an auto policy.

How can I prepare my house against winter weather risks?

According to the Triple-I, homeowners can take several important steps to help mitigate their risks of property damage from severe winter weather. These include: cleaning out gutters so melting ice and snow can flow freely away from your home, trimming trees and removing dead branches, so the weight of snow and ice won’t bring them crashing down on your house or people and vehicles outside your home, and repairing steps and handrails as broken stairs and banisters can become dangerous when covered with snow and ice.

Read more From Cate
Cate Deventer is a writer, editor and insurance professional with over a decade of experience in the insurance industry as a licensed insurance agent.
Edited by
Amy Sims
Managing Editor
Reviewed by
Mark Friedlander
Director of corporate communications, Insurance Information Institute