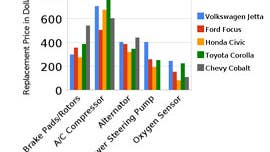 News today that Volkswagen is looking to boost its share of the U.S. car market from the paltry 2 percent it’s sitting at now. Worldwide, Volkswagen is the third largest automaker in terms of production, so it does seem a little odd the German automotive giant doesn’t have a bigger footprint in this country.

The Detroit News article I read seems to chalk up this discrepancy to the European quirkiness of Volkswagen’s designs. There might be something to that, but I think the problem is more fundamental. Like it or not, Volkswagens have a reputation in the U.S. for being unreliable and expensive to fix. I can’t count how many times mechanics and car guys have related horror stories about the sky-high price of Volkswagen parts that would last a few years or even months and then fail again. That’s part of why I’ve always avoided Volkswagens even though, as a Euro myself, I’ve always liked their cool design and emphasis on driving enjoyment.

But in light of the automaker’s aggressive plans for the U.S. market, I think it’s high time I examined whether that bad reputation is really deserved.

Let’s tackle the “unreliable” charge first. J.D. Power gives the Volkswagen brand a dismal 2 out of 5 for overall dependability and correspondingly low ratings in “body and interior dependability” and “feature and accessory dependability.” That jibes with anecdotes I’ve heard from friends and family about air conditioners and stereos that died young.

But Consumer Reports is a little easier on the automaker; it ranked Volkswagen 21 out of 33 total automakers surveyed. That isn’t great, but it isn’t terrible either; VW ended up ahead of Chevrolet, Mercedes-Benz and BMW overall. It’s also an improvement over the last survey, which had VW ranked four spaces lower at 25.

Between these two surveys (I tend to give Consumer Reports a little more weight), it looks like Volkswagen’s actual reliability doesn’t seem to be quite as bad as I thought it would be, and could be on an upward trajectory.

Now let’s tackle the expensive repair charge. To get an answer on whether Volkswagen repair costs were significantly more than those for other brands of autos, I consulted a nifty site called RepairPal.com, which spits out ballpark estimates for a wide variety of car repairs.

I used RepairPal to price out a basket of repairs for a 2005 Volkswagen Jetta, Ford Focus, Honda Civic, Toyota Corolla and Chevy Cobalt. The site gives the estimates as a range, but I used the lower bound, because I assumed that Bankrate’s audience is part of the frugal community and shops pretty hard for good deals on car repair. The results were somewhat surprising.

The Volkswagen was the highest of the field in only two of the five categories: the oxygen sensor, where it led by only a few dollars and the power steering pump, where it led by a lot. While these results probably won’t make Volkswagen owners jump for joy, they’re not so high, in my opinion, that Volkswagen deserves to be singled out.

All in all, it appears that Volkswagen is better in these areas than I expected. What do you think? Any Volkswagen owners out there care to weigh in?