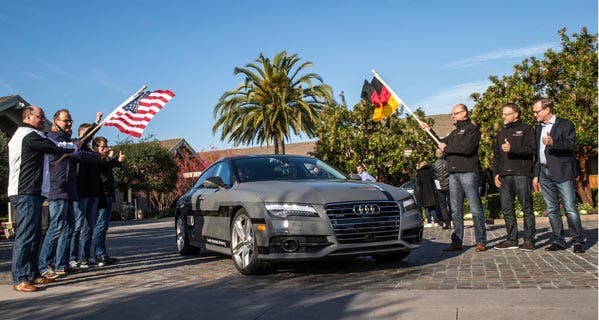 Audi put its piloted driving concept car to a long-distance test earlier this week by traveling from Silicon Valley in California to Las Vegas without a driver.

The 560-mile journey was completed in Audi’s A7 Sportback piloted driving concept car. Members of the media were behind the wheel in what Audi called “test drives,” though they had no driving duties. The car accelerates and brakes independently and initiates lane changes and passing maneuvers automatically.

Audi officials say the company wanted to demonstrate that automated driving is “nearly here.” The A7 Sportback, which the development team has nicknamed Jack, uses a combination of radar sensors that allow navigation without a driver; many of those sensors are nearly ready for production. The sensors work in conjunction with laser scanners, five cameras and navigation data to pilot the car automatically.

When the system reaches its limits and the driver needs to take control — in city environments, for example — multiple warning systems are activated simultaneously to notify the driver. Should the signals be ignored, the system turns on the hazard lights and brings the car to a full stop, usually in the right emergency lane.

The Audi A7 arrived Tuesday in Las Vegas, in time to appear at the International Consumer Electronics Show, where automakers are showcasing the latest in car technology.

Perhaps the most well-known driverless car is owned by Google. Read more about its development in Hit the road in a driverless car.