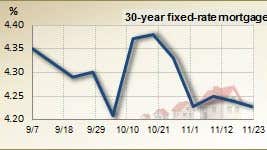 The mortgage world tends to slow down during the holiday season, but that hasn’t been the case this year. While many potential borrowers are traveling and not thinking about their mortgages this week, some lenders say their phones have been ringing nonstop.

It’s not because of a sudden drop in interest rates, as mortgage rates barely changed this week. The buzz comes from hundreds of thousands of borrowers who want to take advantage of the recently revamped Home Affordable Refinance Program, or HARP.

The benchmark 30-year fixed-rate mortgage fell 1 basis point this week, to 4.23 percent, according to the Bankrate.com national survey of large lenders. A basis point is one-hundredth of 1 percentage point. The mortgages in this week’s survey had an average total of 0.37 discount and origination points. One year ago, the mortgage index was 4.58 percent; four weeks ago, it was 4.33 percent.

Until recently, these low rates meant little for borrowers who owe more than their houses are worth because they weren’t able to refinance. But a month ago, officials announced they would revise HARP to allow more homeowners to refi. Observers dubbed it HARP 2.0 and awaited details. Would HARP 2.0 fail, just as the original program did?

“Since HARP was introduced four weeks ago, loan inquiries are up sixfold,” says Dan Green, a loan officer at Waterstone Mortgage in Cincinnati. “Americans impatiently await a formal HARP rollout.”

The Federal Housing Finance Agency, or FHFA, provided lenders with more details about HARP 2.0 last week, but it is up to each lender to decide how quickly to adopt the new guidelines. The best-case scenario is early December, but some in the mortgage industry say many lenders will take longer to implement the new rules.

“I will say it looks like the full program with higher (loan-to-value ratios) and appraisal waivers won’t be out until February or March,” says Michael Becker, a mortgage banker at WCS Funding Group in Baltimore.

Becker says he has been getting many inquiries from hopeful refinancers.

“Generally speaking, fewer people do apply for mortgages during the holidays, and then they pick up after the new year,” he says. “But … the expansion of HARP has people hopeful they will qualify for a refinance.”

More than 1 million borrowers are expected to benefit from HARP, according to the FHFA. But many in the mortgage industry remain skeptical about that expectation and say much will depend on how lenders respond to the new guidelines.

Refinancing during the holiday season?

Those who don’t need to wait for HARP and who are refinancing during the holiday season should stay on top of their games and keep in touch with their lenders, says David Kuiper, a mortgage planner at First Place Bank in Holland, Mich.

“Expect delays due to high loan volumes right now and scheduled vacations,” Kuiper says. “Be prepared for longer lock periods (this may come at the expense of a slightly higher interest rate), and be sure to let your mortgage professional know of any travel plans that may be in place during the loan processing period.”