Mortgages barely fall; is a rise next? 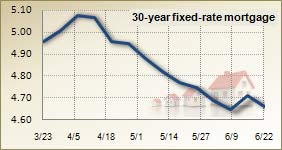 Mortgage rates barely changed this week as the Fed announced that it plans to keep its benchmark interest rate near zero, hoping to contribute to an economic recovery.

The benchmark 30-year fixed-rate mortgage fell 5 basis points this week, to 4.66 percent, according to the Bankrate.com national survey of large lenders. A basis point is one-hundredth of 1 percentage point. The mortgages in this week’s survey had an average total of 0.47 discount and origination points. One year ago, the mortgage index was 4.81 percent; four weeks ago, it was 4.75 percent.

While the Fed’s announcement can be seen as good news for the mortgage market, it is not a guarantee that mortgage rates will remain low.

Results of Bankrate.com’s June 22, 2011, weekly national survey of large lenders and the effect on monthly payments for a $165,000 loan:

Some mortgage experts, such as Cameron Findlay, chief economist at LendingTree, expect rates to rise over the next couple of weeks.

“If you look at the month of May through the middle of June, equities were declining, bond prices were rising and yields were falling,” he says. “There was a flight to quality into (mortgage) bonds. That was helping mortgage rates. But now equities have started to rise and we are seeing a retracement.”

Another factor that might put some upward pressure on mortgage rates in coming weeks is the end of the Fed’s $600 billion bond-buying program. The second round of the quantitative easing program, known as “QE2,” started last year and is scheduled to end June 30.

As expected, the Fed’s rate-setting Federal Open Market Committee said Wednesday that it will complete the purchases of long-term Treasury securities by the end of the month and gave no indication that a “QE3” will take place.

Some mortgage analysts say the end of “QE2” will have little to no impact on mortgage rates because the move had been expected and has already been factored into the market. Also, the central bank says it will continue to reinvest principal payments from the securities as they mature.

Findlay isn’t as optimistic and believes rates will be affected.

“Without that synthetic support (from the Fed), rates will naturally rise,” he says. “And that’s not a bad thing. It’s time to let the market find its own equilibrium.”

However, until there is significant improvement in the job market, the risk of further declines in home values is not going to go away, he says.

In May, the unemployment rate rose to 9.1 percent from 9 percent and the average length of unemployment is now about 40 weeks.

On Wednesday, the Federal Open Market Committee issued a statement acknowledging “recent labor market indicators have been weaker than anticipated,” and while economic recovery continues at a moderate pace, it is “somewhat more slowly than the Committee had expected.”

The Fed’s statement was in line with what investors expected, says Dan Green of Waterstone Mortgage in Cincinnati.

“The Fed does a terrific job in telling you what they are going to say before (they make the announcement),” Green says. “The markets saw exactly what they expected to see.”

Green agrees with Findlay that rates may rise slightly in the next coming days as the markets go through a small “correction” but the increase won’t be sustained for long, he says.