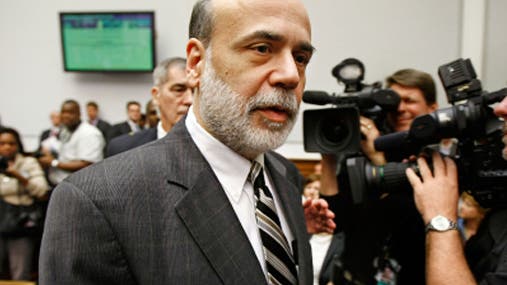 Martin McDermott’s original retirement plan to live off bond dividends was derailed when the Federal Reserve took unprecedented measures to drive down interest rates to pull the economy out of a recession.

His income from bonds shrunk by a quarter after the federal funds rate was lowered to near zero percent and three rounds of bond buying by the Fed kicked in. He also saw returns on his money in certificates of deposit dry up. So, he went to a new plan, supplementing his income with stocks.

“In 2006, I had a lot of money in CDs. The yields were up to 5 percent, and that was really good,” recalls McDermott, 63, who lives in Boulder, Colo., a retired protein chemist who still consults. “Not these days. For someone in retirement, you won’t get anything from a ‘CD retirement.'”

The outlook for savings instruments depends largely on what Federal Reserve policymakers say this week about the future of “quantitative easing,” or QE, the strategy of buying up Treasuries and mortgage-backed securities to push down interest rates on business and consumer loans.

The policy has been a boon for borrowers who have enjoyed historically cheap rates for car and home loans. But that has come at the expense of savers, largely retirees like McDermott, who have suffered abysmally low yields for years on bond investments, CDs and money market accounts. That camp may be hoping for relief from the Fed, but it likely won’t come this week.

“There’s no way the Fed is going to pull off any support now and let interest rates get any higher,” says Lance Roberts, chief strategist at Streettalk Advisors. “Otherwise, at some point owning bonds becomes more attractive than stocks. And that kills the stock market, which kills consumer confidence.”

What’s expected from the Fed

At its two-day meeting, the policymaking Federal Open Market Committee is widely expected to maintain the federal funds rate between zero percent and 0.25 percent and continue to buy $85 billion in Treasuries and mortgage-backed securities a month. The big question is when the FOMC will taper QE, a concern FOMC members have sparked during the last six weeks in speeches that have offered differing views on how and when to curtail asset purchases.

The comments have vexed investors, who are worried that a cutback could occur earlier than the fourth quarter. Stocks have swooned and Treasury yields have spiked on the uncertainty. The Standard & Poor’s 500 index logged a record close May 21 but finished trading sessions at levels as low as 3 percent below that high in the weeks that followed. The 30-year Treasury bond yield has climbed by roughly half a percentage point since the end of April.

“It will be interesting how the Fed will react to the volatility in the markets,” says Brian Hess, associate portfolio manager at Brandywine Global Investment Management. “I’m curious if the Fed will give us thresholds for tapering to increase transparency.”

The economy: Strong, but still challenged

The FOMC will release updated forecasts for gross domestic product, the unemployment rate, inflation and interest rates, all of which help shape its policy. The outlook will give Fed watchers some indication about how the group sees progress in the economy and if it’s nearing sustained improvement that could trigger a reduction in quantitative easing.

So far, the numbers point to a mostly improving economy:

Still, job growth remains below Fed Chairman Ben Bernanke’s stated goal of 200,000 per month for four straight months. The unemployment rate remains high at 7.6 percent. Manufacturing is growing only modestly. And there are the ill effects of the sequester cuts by the federal government.

“The real economy is showing some strength despite being beat down by a series of misguided austerity measures,” says Robert Shapiro, who was U.S. undersecretary of commerce under President Bill Clinton.

Reasons for the Fed to stay the course

Two threatening events this summer may convince the FOMC to keep policy unchanged for a while. First, Congress must raise the government’s debt ceiling by September, which could touch off a partisan standoff like the one in 2011, says Roberts.

That time, the S&P 500 tanked 16 percent, and the Fed had to swoop in with Operation Twist, which swapped out short-term securities on its balance sheet for longer-term ones, to keep rates low. Pulling the plug too soon on quantitative easing could compound any harm coming from another potential debt ceiling debate, Roberts says.

“The Fed has been very explicit about its role in context of misguided fiscal policy. It will be there to support the economy,” adds Shapiro.

That’s good for the housing market, which is on the Fed’s radar and is finally showing signs of a real rebound.

Sales of new and previously owned homes are increasing, and a widely watched gauge of home prices has been on the rise. Low mortgage rates have helped homeowners to refinance into more affordable mortgages and have convinced first-time homebuyers to pull the trigger.

Just ask Emily Goodman, who planned to wait until the fall or winter of this year to buy a house, but ended up closing on her 1920s home in South Orange, N.J., with a 4 percent rate May 31. Goodman and her husband originally wanted a condo they would sell down the road and expected to graduate to a house at that time.

“But when we started crunching the numbers, who knows what the interest rate would be in six or seven years when we sold. Most likely higher. It didn’t make sense,” she says. “The interest rate really pushed us.”

What the Fed has to weigh this meeting may come down to the Goodmans versus the McDermotts.