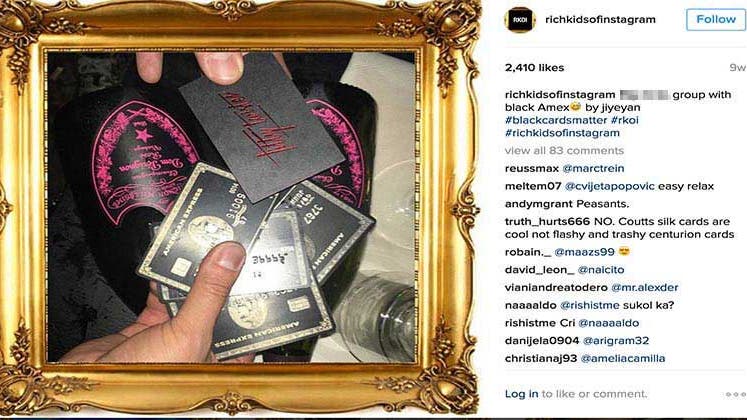 Credit cards for the filthy rich

A staggering 82% of Americans indicate that if someone they were having dinner with offered to pay and whipped out a premium credit card — like a gold, platinum or black card — it would make no impression whatsoever, according to a recent Bankrate survey of 1,002 U.S. adults.

Of course, there’s premium and then there’s premium. How about a jewel-encrusted, solid gold credit card that also features inlaid mother of pearl? That might turn some heads.

Super-exclusive credit cards are a big deal because they are invitation-only, they require you to charge tens of thousands or hundreds of thousands of dollars annually and they are made of premium materials, says Allen Walton, an online-business entrepreneur in Texas.

“Take all of those qualities — wealth, physical attractiveness, prestige — it’s what everybody wants in their own lives,” Walton says.

Truly premium credit cards are out of reach for most of us. But they sure are fun to look at.

Here are 5 impressive credit cards for the filthy rich (and one for the just plain wealthy).

Perhaps the, ahem, gold standard of premium credit cards, the American Express Centurion is actually made of anodized titanium. You’ll have to spend hundreds of thousands of dollars in a calendar year on your other Amex cards before becoming eligible for Centurion.

How to get one: Available by invitation only.

What stands out: The Motley Fool profiled this secretive card, writing of its concierge service, “The general consensus is that the service can get you just about any restaurant table, theater seat, flight, or hotel room you can imagine.

“There are some pretty over-the-top concierge stories, like the one about a concierge who tracked down Kevin Costner’s horse from the movie ‘Dances With Wolves’ for a cardholder who wanted to purchase it, and then personally delivered it.”

The Palladium is made with 23-karat gold and, well, palladium, a silver-white metal that is far rarer than platinum. The materials used to make the card cost roughly $1,000, according to Bloomberg. That’s more than the annual fee.

How to get one: Available by invitation to select JP Morgan private banking clients.

What you get: Airport lounge access; rewards points; a 33% travel discount when you redeem your points for airfare, hotels, car rentals or cruises; concierge service and 35,000 bonus points once you spend $100,000 annually.

What stands out: A Bloomberg columnist wrote that the Palladium is available to customers who allow Chase to manage at least $25 million of their money. It also helps to know CEO Jamie Dimon.

Wrote the columnist: “‘We have probably half of the world’s billionaires as clients,’ I was told by someone in a position to know. ‘They needed something special — and we gave it to them.'”

The sales pitch for the Royale MasterCard is pretty intriguing: “Imagine power that comes in a unique golden-edged card, embedded with a certified diamond. Imagine having no limits to your purchasing power. Imaging possessing a card that’s unmatched anywhere in the world.”

How to get one: Available by invitation to “a select group of people representing royalty and the upper echelons of the social and business community,” according to the bank.

What it costs: Unclear. Some websites say there are no fees; one says there is an initiation fee that’s equivalent to about $1,900.

What you get: A dedicated relationship manager for financial requests, as well as a lifestyle manager.

What stands out: The bank specializes in providing services for its credit card clients, like arranging tickets to the Academy Awards. But it’s also known for its unlimited spending limits, according to The National, an English-language publication in Abu Dhabi.

From The National: “‘The needs of these clients are different,’ says Amit Marawah, the senior vice president and head of marketing and communications for Dubai First. ‘Whatever he or she wants to swipe it on, the transaction must go through. If the client likes a yacht on holiday, he or she should be able to buy it.'”

This card is so valuable it comes with a separate plastic version that you might actually use. This credit card from a bank in Kazakhstan is made of gold and comes encrusted with 26 diamonds, totaling 0.17 carats, and a mother of pearl.

How to get one: It was reportedly made available to 100 customers of Sberbank when it was first offered in 2012.

What you get: Access to a personal manager, a life and health insurance program with coverage equivalent to about $118,000 and airport lounge access.

What stands out: As if the other perks weren’t enough, the bank told ABC News, it also planned to hand out these goodies to Kazakhstan residents who qualified for a card: a free iPhone 5 and a Montblanc card case.

This charge card from Coutts & Co., a British private bank and wealth management firm founded in 1692, “opens doors to a world of privileges and benefits,” according to the bank.

How to get one: Available by invitation to select Coutts clients.

What it costs: Annual fee is equivalent to about $500 unless you spend about $71,000 annually with the card.

What you get: Travel insurance, access to airport lounges, concierge service and a rewards program.

What stands out: “This is an exclusive credit card for many reasons,” writes RareCreditCards.com. “One of the main reasons why is because it is the card used by Queen Elizabeth II, and it is a product that is issued in the U.K. where there is only around 100 units that have been sold.”

Finally, a credit card for the merely rich instead of the ridiculously wealthy. There are actually 3 versions of this card, which replaces the former Visa Black Card. But this version is the only one that is made with 24-karat gold (plated). Be sure to listen to the sound effects when the card drops in the video above.

How to get one: You, yes you, can apply for one.

What you get: Airport lounge access, rewards program, concierge service, “luxury gifts” and a $200 annual credit toward airfare.

What stands out: If you’re into this card just for the metal, you may want to look elsewhere. Here’s what ThePointsGuy had to say: “Some people enjoy having a card made out of stainless steel and carbon or, better yet, 24K gold. That said, you don’t have to pay $995 a year for this; metal-creditcard.com will replace any of your cards with a metal or gold version that you design, and a 24K gold-plated card costs just $250.”