The number of bank branches in the U.S. has been steadily declining for years. But when it comes to having a physical banking presence, Navy Federal Credit Union has taken a different approach.

Since at least 2011, the total number of Navy Federal branches has actually grown each year, increasing more than 55 percent over that time — with plans to add more over the next few years. In contrast, Bank of America has around 27 percent fewer branches than it did just nine years earlier according to the Federal Deposit Insurance Corp.

Navy Federal, which is Bankrate’s 2021 Readers’ Choice winner for best credit union and a top credit union, has a little more than half of its 345 branches on a military installation or within three miles of one.

“When these service members deploy, we are almost like a connection for them,” says Richard Allen, vice president of branch operations at Navy Federal Credit Union.

Surveys sent to Navy Federal members are a part of the process of choosing a new branch location, according to Allen. “We take that feedback in and then we overlay that with the remainder of our data.”

Members will soon have a few more options with new branches scheduled to open in Georgia, Hawaii, South Carolina, Texas and Washington. You’ll need to have ties with the armed forces, Department of Defense, National Guard, or be an immediate family member in order to open an account.

But banking must also extend beyond the branch setting

With members around the world, Navy Federal also has to account for members that won’t be near a branch.

“So serving them, it really is a matter of figuring out, ‘OK, how do we create a network that sustains their portability?’ — I mean they move around all the time,” Allen says.

Digital-only banking has the lowest satisfaction level, according to the J.D. Power 2020 U.S. Retail Banking Satisfaction Study. So in an era of fewer brick-and-mortar branches, in-person banking is still important.

“It is something that we invest in, and that we do think is critical to our member’s service offerings,” Allen adds.

Questions, high-end transactions or receiving financial guidance were some reasons Allen says its members come into a branch. Apps and technology can’t handle every type of transaction or customer interaction.

But people also like their online banks too. Ally Bank, Bankrate’s best online bank and Readers’ Choice winner this year, surpassed $100 billion in retail deposits in September 2019. Online banks are popular because they generally offer a higher yield than brick-and-mortar banks. However, Navy Federal offers certain products with yields that are competitive with online banks.

Branch banking through the pandemic

Similar to the challenges faced in retail, banks and credit unions have also changed the way they operate branches as a result of the COVID-19 crisis. At Navy Federal — which doesn’t have drive-thrus — express and curbside transactions have become new additions.

“We were serving [customers] outdoors: walking inside, performing the transaction, coming back,” Allen says. “It was wildly successful.”

Navy Federal also employs cross-trained universal bankers. These bankers can be tellers but may also help with other types of in-branch customer service too. Versatility was necessary before the pandemic, and is even more important now.

“The goal is that we’re spaced out far enough that we can maintain social distancing, that we can maximize every space in the branch and so that our member service representatives, who are universal, [can] do everything in the branch,” Allen says.

Allen says the new branches opening soon will look different, largely due to COVID considerations. But the functionality of the branches will not change.

“Two, three, four years down the road, we’re still going to look at it and be like, ‘This is a great design,’ because it still allows us to do what our team members do so well in the branches,” Allen says. 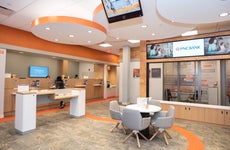 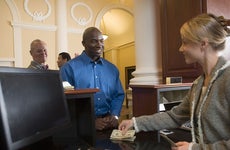 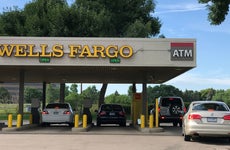