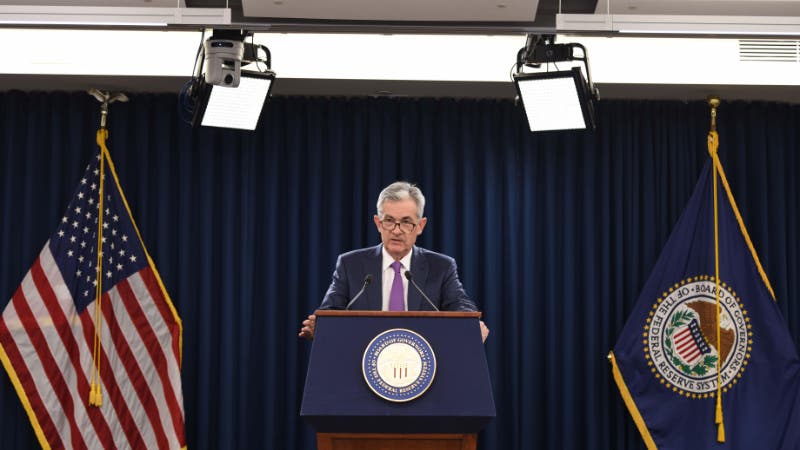 The Federal Reserve cut interest rates for the second time this year in an attempt to cushion the U.S. economy from trade tensions, slowing global growth and low inflation.

The U.S. central bank voted Wednesday to reduce its benchmark interest rate by 0.25 percent, or 25 basis points. That’s the second straight reduction, after the Fed lowered borrowing costs by the same amount on July 31. It’s also the first time since before the Great Recession that the Fed lowered rates at back-to-back meetings.

The move brought the federal funds rate down to a target range of 1.75 percent and 2 percent, where it was in September 2018.

“Sustained expansion of economic activity, strong labor market conditions, and inflation near the Committee’s symmetric 2 percent objective are the most likely outcomes, but uncertainties about this outlook remain,” the Federal Open Market Committee (FOMC) said in its post-meeting statement, released at 2 p.m. in Washington.

Fed officials “will continue to monitor the implications of incoming information for the economic outlook and will act as appropriate to sustain the expansion,” according to the statement. Officials said the job market is “strong,” with “solid” job gains.

For savers, the rate reduction means interest rates are likely to fall on savings accounts and certificates of deposit (CDs), if they haven’t already. Consider locking in your rate on a CD now. Borrowers, however, should take advantage of the opportunity by prioritizing paying off high-cost debt, such as credit cards. The reduction will likely push interest rates on loans even further, including auto loans, variable-rate mortgages and home equity lines of credit (HELOCs).

“The latest rate cut means the Federal Reserve has unwound just two of the nine rate hikes made between 2015 and 2018,” says McBride. “Not only is a quarter-point move largely inconsequential to household budgets, but credit card and home equity rates are still notably higher than they were just a couple of years ago.”

The Federal Reserve has been under immense pressure, both from the Oval Office and from markets, to help preserve the record-long expansion. President Donald Trump on Sept. 11 urged the Fed’s “boneheads” to cut interest rates to zero or negative.

Earlier in the month, he called Fed Chairman Jerome Powell an “enemy.”

Jay Powell and the Federal Reserve Fail Again. No “guts,” no sense, no vision! A terrible communicator!

Markets, meanwhile, had been pricing in interest rate cuts all the way into 2020. But in the days leading up to the meeting, they weren’t so sure. Money markets had trouble finding funding on Monday and Tuesday, which pushed up interest rates on one-day loans backed by Treasury bonds, also called the repurchase agreement or repo rate. That also pushed up the federal funds rate, a different benchmark interest rate that closely follows the repo rate.

Those conditions, matched with surging oil prices that could lead to inflation and a recent trade truce with China, led some investors to think that the situation might be changing.

As of Wednesday, nearly 27 percent of traders expected the Fed to hold rates steady, up from 5.4 percent a month ago, according to CME Group’s FedWatch. More than half of investors were betting Tuesday that the Fed would hold rates steady.

In response to funding shortfalls in the repo market, the Fed decided to adjust the interest it pays to banks on excess reserves (or the IOER rate) to 1.80 percent. The move is meant to ensure that the Fed’s benchmark interest rate stays within its target range.

Some economists wondered whether the Fed would resume expanding its balance sheet to prevent future cash shortages in money markets. Officials, however, announced no changes.

“Despite strains in money markets that have forced Fed intervention this week, there is no indication of any imminent return to quantitative easing and balance sheet expansion,” McBride says.

The U.S. economy has been sending off mixed signals in recent weeks. Consumer spending has been strong, but manufacturing in the U.S. is in contraction territory. Meanwhile, business investment has slowed thanks to the ongoing trade disputes between the U.S. and China. The job market has been a stable bedrock for the U.S. economy, with 107 consecutive months of job gains.

That’s largely because the U.S. economy has been sending off mixed signals in recent weeks. Consumer spending has been strong, while the job market continues to be a stable bedrock for the U.S. economy, with 107 consecutive months of job gains. Manufacturing in the U.S., however, is in contraction territory. Meanwhile, business investment has slowed thanks to the ongoing trade disputes between the U.S. and China.

Though consumer confidence had remained robust, it fell in August by the most since 2012, according to a sentiment survey from the University of Michigan. Amid the bifurcated U.S. economy, the global economy also has dark clouds hanging over it. The United Kingdom is preparing to exit from the European Union, while a slowdown is occurring in Europe.

The Fed itself is divided on the outlook for the future path of policy. U.S. central bankers also updated their quarterly economic projections, releasing its so-called “dot plot” that shows officials’ forecasts for the fed funds rate over a two-year period. With just two more meetings left in 2019, those rate moves may come sooner rather than later.

Fed not on a preset course

Powell walked a careful line at the Fed’s post-meeting news conference. He made no promises of future rate cuts but instead said the Fed is not “on a preset course.”

“We’re going to be making decisions meeting by meeting,” he told journalists. “It’s a challenging time, I admit.”

It’s a message of data dependence, says Ben Ayers, senior economist at Nationwide Insurance. It’s different from the gradual pace of rate hikes in 2018, which occurred every quarter like clockwork.

“They’re not on any prescribed path; they’re just going to respond to what’s going on in the economy,” Ayers says. “Things have gotten more unsettled, and they’re requiring themselves to be more data dependent and responsive to what’s going on at a meeting to meeting standpoint.”

Powell made sure to signal to markets a willingness to cut rates, should the U.S. economy need extra stimulus.

“There may also be a time when the economy worsens, and we have to cut more aggressively,” Powell said, after saying that the Fed will stop cutting rates “when we think we’ve done enough. Our eyes are open; we’re watching the situation.”

Powell said officials “don’t know” whether more cuts will be necessary, but added that officials “don’t see” the economy turning down to the point where “a more extensive sequence of rate cuts are required.”

At the same time, the Fed didn’t make many changes to its characterization of the U.S. economy. Only one sentence from the Fed’s post-meeting statement changed.

Instead of saying that household spending has “picked up from a year earlier,” as it did in July, the Fed said consumption has “been rising at a strong pace.” At the same time, the Fed said “business fixed investment and exports have weakened.”

“Weakness in global growth and trade policy have weighed on the economy, Powell said during the press conference.

“The Fed is divided on what lies ahead,” McBride says. “The economic assessment is little changed since July, with household spending being upgraded and business investment and exports both weakening. But this rate cut, and any more [cuts] to come, are a reflection of the drag that trade could have on the economy.”

What a rate cut means for your money

It might not be easy to tell what your next steps should be, given that the path for policy is uncertain. But generally, each time the Fed cuts rates, borrowing costs get cheaper while yields on savings products fall.

Now might be a good time to consider refinancing your mortgage, which could potentially shave hundreds of dollars off your monthly payment. It’s also important to remember that many online savings accounts offer yields 25 times the national average of 0.1 percent, so even if you do see your returns fall, you’re still ahead of the curve.

“Returns for online savings accounts will drift lower following the latest rate cut but will remain light years ahead of the 0.1 percent that most banks are paying, and where most consumers have their savings stashed,” McBride says. “Mortgage rates remain in the refinancing zone for many homeowners. Being able to trim $150 per month out of the household budget by refinancing to a lower rate could be the pay raise homeowners didn’t otherwise get.”