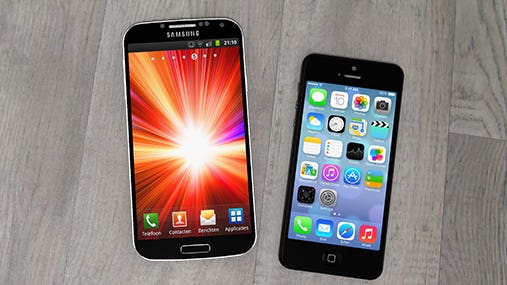 You take your brand-new, shiny smartphone out of the box. It has all the latest features and it’s the thinnest, sleekest phone you’ve ever seen.

Then, seemingly before you can even power it up, a new, even cooler phone has hit the market. In those moments, it’s easy to wonder: Is upgrading to a new phone even worth it?

That question is even more pressing than usual with the release of Apple’s latest iPhones. But when deciding whether to upgrade, here are a few things to consider:

Those first 2 questions are mostly a matter of personal preference, but if you do decide to splurge on a new phone, you should know the answer to the 3rd.

To make matters even more complicated, the major carriers have introduced a number of new phone plans that offer many different options.

With all the various carriers, plans and contract options out there, coming up with 1 number for how much you’d save by skipping an upgrade isn’t always easy. Let’s look at 4 different scenarios (leaving out taxes and fees, which can vary widely depending on where you live).

Scenario 1: Sticking to your current phone and plan

Louis Ramirez, senior editor at DealNews, says skipping an upgrade makes the most sense in most cases.

“Sure, you’ll miss a few new bells and whistles, but in the grand scheme of things, today’s smartphones are fully equipped,” Ramirez says. So in terms of performance, your current phone will easily surpass the 1-year mark with no problems.”

You’re not giving up much in terms of performance by forgoing the upgrade, Ramirez says.

“Like computers, smartphones seem to become obsolete almost before they are out of the box, and seem to devalue as fast as driving a new car off the sales lot,” Nitzsche says.

So when does it make practical sense to upgrade?

“When you are experiencing technical issues,” says Andrea Woroch, a consumer savings expert. “An older phone may be operating slower, experiencing shorter battery life, as well as screen blackouts. In these instances you may be tempted to upgrade. Before you do, though, consider getting it fixed for less. Repairing these issues instead of opting for an upgrade can save a person hundreds of dollars.”

How much you’ll save by skipping an upgrade depends on your carrier, whether you’re eligible for an upgrade or trade-in, and what type of phone you want. In general, upgrading to the newest model would cost you:

Either way, you’ll save hundreds and avoid a depreciation hit by standing pat instead. But if you have your heart set on upgrading, let’s take a look at what it will cost you, depending on all these new plan options.

Scenario 2: Upgrading at a major carrier

If you decide to upgrade, finding the cheapest way to go about it can be tricky to figure out, thanks to all the different plan options phone companies offer.

Subsidized phones and plans are slowly making their way out of the market. AT&T and Sprint still offer this option, but AT&T has plans to phase it out.

“With the (subsidized plan), you get a hefty discount on the phone, but are obligated to stay with the carrier for 2 years,” Ramirez says. “For most mainstream smartphones, this means you’ll pay $199 for the entry-level model and are obligated to fulfill a 2-year contract.”

With an unsubsidized phone, you’ll pay the phone’s full price, but you don’t have to sign a contract, so you’re not locked into anything. But your options don’t end there. The 4 major carriers offer a number of different, confusing payment plans, but they all basically fall under 4 main types (although each carrier doesn’t necessarily offer all 4):

Our analysis shows that when it comes down to total costs, you’ll probably end up paying about the same over the first 2 years of your new phone’s life, no matter the option you choose. (Obviously, your real-world costs may vary; our analysis is based on midrange plans and usage.)

These new plans are marketed as cost-effective, but over time, you’ll end up paying full price for the phone one way or another. But Ramirez says that, over the longer term, no-contract plans are usually the way to go.

“The unsubsidized plans usually include a discount on your monthly payments. These discounts can shave up to $25 a month from your bill. So in the long term, you’ll actually pay less with the unsubsidized phone,” Ramirez says.

When you buy your phone outright, you also have the freedom to switch to a cheaper carrier, potentially making your total cost even lower.

Scenario 3: Getting a new phone with a cheaper carrier

Cellphone carriers are changing their business models, namely because there’s a lot of competition. Consumers are starting to realize that lesser-known services are often equally worthwhile.

Republic Wireless, for example, offers a $25 monthly plan that includes unlimited talk, text and data. Unfortunately, there are really only 2 phones you can use with the carrier, so fancy iPhone upgrades aren’t an option. If you buy Republic’s Moto G phone at $129, here’s what your numbers will look like over time (minus taxes and fees):

You’ll save hundreds of dollars per year (at least) over upgrading on a large carrier. That’s assuming you use a full 2 GB of data every month. If not, Republic will issue a refund for the unused data.

Then, there are more conventional discount providers like Straight Talk, which is operated by TracFone Wireless. It charges a flat fee of $45 a month for unlimited talk, text and data (although data is throttled after 2.5 GB).

While shelling out the cash to buy a brand-new shiny iPhone on Straight Talk (or most late-model smartphones) can be tough, you’re likely to save money over the long term compared with a major carrier — if you can cut your data consumption.

Although not as cheap as Republic, your total costs are still significantly less than with mainstream carriers, especially if you bring your own phone.

Scenario 4: Taking your old phone to a discount carrier

If you’re able to unlock your current major-carrier phone and take it over for free to a discount carrier like Straight Talk, H2O Wireless or Ultra Mobile, you can save a substantial amount of money.

Ramirez cites another discount carrier, Virgin Mobile, as an example of how much is potentially at stake.

“You’re looking at $35 a month on Virgin versus $80 a month on Verizon (considering a similar prepaid plan),” Ramirez says. “On a yearly basis, you’re looking at savings of at least $540. Over a span of 2 years (which is the length of the average phone contract), you’ll save $1,080 by choosing a discount carrier like Virgin Mobile.”

Overall, it’s clear the longer you can hold out for that new phone, the better. Especially once you have a totally paid-off, unlocked phone in your hands, there is a huge range of carriers and plans that can save you big bucks over the long haul.