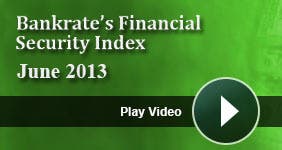 Americans are feeling very secure about their personal finances, according to Bankrate’s June 2013 Financial Security Index. The index registered 102.7 in June. Not only is that a record high, it also marks the first time the index has been in positive territory for four straight months since the index’s creation in December 2010.

The index came back with other positive records, too. The percentage of those feeling less secure about their jobs and those reporting lower net worth than last year hit all-time lows. Only 1 in 5 Americans felt their overall financial situation got worse versus the previous year, tying the lowest reading from April 2013. And 30 percent of consumers felt more comfortable about their debt, a new high.

“As an adviser from Michigan, we haven’t seen good times since before 2001,” says Richard T. Feight, a CFP professional. “(But) finally I am hearing a little optimism from clients on their situations, many of which are starting their own companies for employment.”

Recent data back up the nationwide enthusiasm. Sales of new and previously owned homes are rising, while home values are growing year over year. Job growth, while not spectacular, has been steady. Employers added 175,000 jobs in May, in line with expectations. Other measures of consumer confidence have risen along with retail spending.

Where Americans could use a boost is in their savings. Americans who feel uneasy about their savings outnumber those who feel comfortable by a ratio of nearly 2-to-1, according to the index. Nearly half of those surveyed have less than three months’ worth of expenses or nothing at all in emergency savings.

“Psychologically, people think nothing bad is going to happen to them,” says Frederick. “Additionally, with interest rates being so low and the stock market doing well for the past 18 months, they feel that having a big emergency fund is not in their best interests because it doesn’t earn anything.”

Since the recession, some have focused more on debt reduction rather than building savings. And other Americans have already run through their savings after a job loss, Feight says. More than a third of unemployed respondents have no emergency savings, compared with about a fifth of employed respondents.

“Three months’ worth of expenses is hard to think about when you’ve been trying to find work for so long,” says Feight. “People who (are) unemployed or underemployed are just trying to get by.”