Along an otherwise nondescript stretch of highway in the California desert, 33 tons of steel have no doubt rejuvenated countless carloads of conversation grown stagnant on the long drive to Las Vegas. At 134 feet in height, it is the world’s tallest thermometer, standing proudly next to a Bob’s Big Boy in Baker, Calif., the city also known as the “Gateway to Death Valley.”

Built 21 years ago as a roadside attraction, its concept is more of an homage to a day in July 1913 when the temperature hit 134 degrees Fahrenheit, the hottest temperature recorded in North America. It’s also why the thermometer, which is actually just an electric sign that displays the temperature, tops out at 134 degrees.

If this is beginning to sound like cocktail party fodder, it’s because weather might be the greatest conversational void-filler of all time. The Baker thermometer is a prime example. Extreme weather is fascinating, especially when observed from a temperate setting such as your air-conditioned living room.

Claims of the most extreme weather can be difficult to confirm. Faulty or overexposed instruments and not being high enough off the ground to record an accurate reading are reasons enough to doubt records, according to Christopher Burt, author of “Extreme Weather.”

Even so, the planet is capable of churning out some pretty remarkable trivia answers. 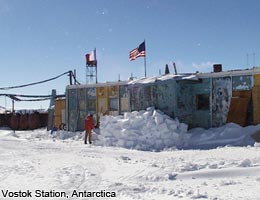 You might expect the coldest place on earth to be associated with one of the poles or to be Russian-sounding. And you would be right. Vostok Station, a Russian research outpost in Antarctica, registered an otherworldly minus 128.6 degrees Fahrenheit July 21, 1983, the coldest temperature recorded on Earth. To help put that in perspective, Mercury freezes below minus 38 degrees Fahrenheit, so alcohol thermometers are needed to tell you that it is, in fact, cold.

How could it get so frigid on our planet? To begin with, you’re standing on an antarctic ice cap around 2.5 miles thick. According to scientists with the British Antarctic Survey and the Arctic and Antarctic Research Institute, it was also due to the absence of clouds or atmospheric ice crystals, which can trap some level of heat and warmer air that usually circulates high over the continent. The scientists added that the next time this happens, the temperature could plunge all the way to minus 141 degrees.

Old Man Winter must wear an ushanka, because the coldest regularly inhabited place on the planet is the Siberian village of Oymyakon, Russia. Oymyakon means “nonfreezing water” in Russia and has an average winter temperature of minus 49 degrees. Remote Russians either clearly have a sense of humor or had one too many vodka-filled thermometers. 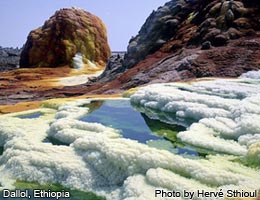 You must figure things will start looking up soon when you’re trolling for fertilizer in a natural oven that looks like the set for a bad science fiction movie. Dallol, Ethiopia, is considered by many to be the hottest inhabitable place on earth, with an average annual temperature of 94 degrees Fahrenheit.

Located about 426 feet below sea level, groundwater carries salt deposits to the surface where heat quickly evaporates the water. The colorful salt formations left behind were once exploited by various countries during World War I for valuable potash, which is a salt containing potassium used in fertilizer. Today, Dallol is essentially a ghost town, adding to its simmering eeriness. For good measure, an active volcano sits nearby.

To keep on the heat wave, a quick five-day jaunt across the African continent will get you to Libya, where the Ghibli winds carry hot inland air toward the Mediterranean coast. The air gets trapped and compressed on its way, leading to some ultratoasty temps for the region.

According to Burt, this phenomenon likely occurred Sept. 13, 1922, in the city of Al Azizia, Libya, when a shorts-worthy 136.4 degrees Fahrenheit was recorded in the shade of a station on an Italian-owned farm. Though Burt has cited unreliable equipment as reason to be skeptical, it is widely considered to be the world’s highest recorded temperature.

Dry enough for a red rover 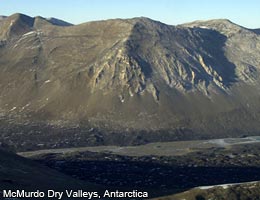 One needs to travel to the ends of the Earth to find the driest spot on the planet. It is a place that by some estimates hasn’t seen a drop of actual rain in 2 million years. But before you reach for the picnic basket, you might want to know that it’s in Antarctica. On a continent mostly covered by thick snow and ice, the McMurdo Dry Valleys of Antarctica are so dry it seems impossible. The surrounding peaks prevent any storm clouds from passing over the area, and cold air is pulled down the slopes at up to 200 mph, warming along the way and evaporating any semblance of moisture. The cold, barren, windswept area is so remarkable that it is considered by NASA to be the best location for dry runs for missions to Mars.

Closer to civilization, the Atacama Desert of Chile won’t be the site of any golf courses soon, either. Although the region was walloped by a freak storm and 32 inches of snow last July, it usually averages 0.004 inches of rain in a normal year. The Andes have steered rain away from some parts of the desert for 400 years. 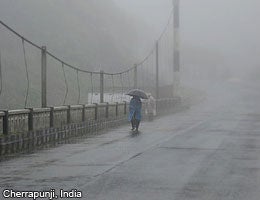 “Pruney” fingers are probably the standard in Lloro, Colombia. In the hills of this South American nation, Lloro receives more rainfall than anywhere else on the planet. According to the National Oceanic and Atmospheric Administration, the village of 2,651 people sees 523.6 inches of rain per year, which is greater than the height of an average four-story building. It also comes out to nearly 1.5 inches per day. Lloro has presided over the rainfall record for three decades now, which is impressive enough to deserve two shriveled thumbs up.

But around the world in India, the people of the villages of Cherrapunji and Mawsynram point to their waterlogged copy of the “Guinness Book of World Records,” which distinguishes their corner of the world as the wettest. Though the yearly average might not stack up to Lloro, Cherrapunji does hold the record for the wettest year, with more than 900 inches falling from 1860 to1861 and more than 30 feet falling in July 1861 alone. The extreme weather in the area is caused by two converging monsoon paths and moisture trapped by the Kashi Hills.

The local inhabitants aren’t about to complain about soggy socks though; Cherrapunji suffers from a water shortage. Deforestation prevents rainwater from being absorbed into the ground, which creates flooding. The floodwaters are not potable. 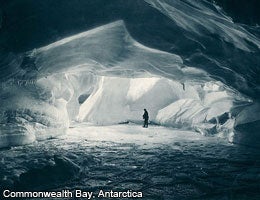 Chicago’s nickname is “The Windy City,” though that’s probably just the rationalizing of disgruntled Cubs fans because the average annual wind speed of 10.3 mph doesn’t even qualify for the top 100 windiest cities in America.

The all-time strongest wind ever recorded on the planet was on Barrow Island in Australia in 1996, when Cyclone Olivia topped out at 253 mph. We’re going to go ahead and guess umbrellas were useless that day.

The most consistently windiest place on Earth is, perhaps by little surprise, in Antarctica. On the coast closest to Australia, Commonwealth Bay has been linked to remarkable gusts since its early explorations.

“Having failed to demolish us by dogged persistence, the hurricane tried new tactics in the form of a terrific series of Herculean gusts,” wrote expeditioner Douglas Mawson of the bay in 1912 in his book, “Home of the Blizzard.”

“The momentary velocity of these doubtless approached 200 miles per hour.”

The mean annual wind at Commonwealth Bay is almost 50 mph, caused by gravity pulling cold air down toward the coast and increased by geological obstructions.

And you thought you wouldn’t have anything to talk about at lunch today. 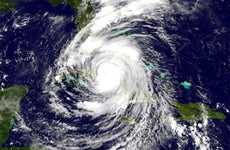 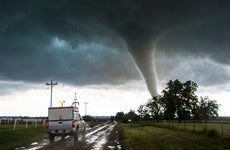 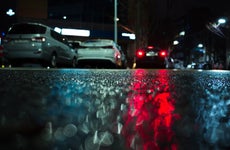 Driving in rain, fog and other bad weather 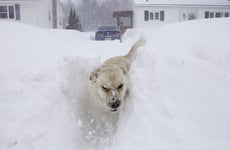 The most expensive winter storms