To boldly go on vacation

Summer is about to come into view, and along with it, the hordes of luggage-laden minivans heading for the great American vacation. There will be plane flights and train rides, Mount Rushmore visits and Grand Canyon views. It might not be long, though, before we’re all considering a type of trip that Clark W. Griswold would never have attempted: a voyage straight up into space to marvel at the Earth from afar and gaze at the stars like never before.

Space tourism is expected to “take off” in the next decade, with the Federal Aviation Administration predicting it to blossom into a billion-dollar industry in that time.

It’s not all that difficult to imagine, given the technological progression and increasing accessibility since man’s first “timid penetration beyond the confines of the atmosphere,” as cosmonautic patriarch Konstantin Tsiolkovsky forebode a century ago.

The Jetsons’ concept of every average George and Jane scooting around in private saucers was probably inevitable from the launch of the first satellite, Sputnik, in 1957. What followed were decades of space-based machismo between Russia and the United States, one incredible moon landing and a bevy of science fiction that almost made space tourism passe. Almost. 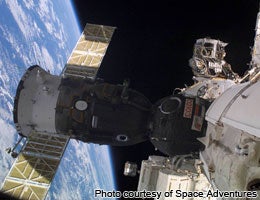 That all changed in 2001 when Dennis Tito decided he wanted to play Neil Armstrong for a few days — tagging along on a trip to the International Space Station. Creator of the Wilshire aggregate market index, Tito shelled out $20 million for the privilege of becoming the first space tourist, spending nearly eight days in space — to the reported chagrin of the actual astronauts involved in the mission who felt he needed more training.

Tito was also the first space tourist client of Space Adventures, which currently is the only company to have sold spaceflights to individuals that have been realized.

The company offers a wide range of astonishing — and pricey — out-of-this-world experiences that would’ve seemed like fantasy to every nonastronaut (or cosmonaut) at the turn of the century.

Thanks to Space Adventures, you could be the eighth space tourist to orbit the Earth or to dock at the International Space Station. The price tag for such a trip now? Approximately $50 million. What’s more, you’ll probably be put to work with some sort of experiment while you’re up there, so don’t expect there to be any zero-gravity spa treatments included in your pricey package.

The most expensive walk you’ll ever take 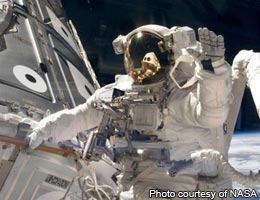 Since you already wrote a check equivalent to the gross domestic product of a small country to see the Earth as so few have seen it, you may as well go all out. For another $15 million, you can stay on the International Space Station for five days to be trained and certified for an “Extravehicular Activity,” otherwise called a spacewalk. For 90 minutes, you will be out in the nothingness of space, realizing exactly how small you really are. You also may be given some menial task to make you feel important and take your mind off of the thought that you’re only one “everything going terribly wrong” away from drifting off helplessly into deep space.

If this still isn’t enough for you and you’ve just won Mega Millions, inquire about Space Adventure’s mission planned for 2017. It might sound like fiction, but they’re planning a circumlunar flight that will be the first human trip to the moon since 1972. As a bonus, you’ll get to do the Jim Lovell/Tom Hanks trick of hiding the Earth and “everything you’ve ever known” under your thumb from 240,000 miles away. The mission provides space for two commercial passengers at a price of $300 million, which is shocking in and of itself until you hear that someone has already reserved one of the seats. We’re going to guess they probably also called “shotgun.”

Space on a budget 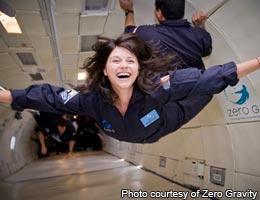 Not every trip into space requires an eight-figure financial hemorrhage. One can still experience the wonders of weightlessness and looking out into black space and bright stars at a fraction of the price. Well, as long as you keep in mind how large the figure is we’re taking a fraction of.

Space Adventure’s subsidiary, Zero Gravity, offers what most people would consider the most horrifying plane ride of their life. And more than 7,000 people have paid about $5,000 to take this fear-inducing plunge. A modified Boeing 727 climbs at a 45 degree angle to 34,000 feet before reversing course and hurtling toward the ground. Each “parabola” provides about 30 seconds of weightlessness.

To “slip the surly bonds of Earth” and truly experience space comes with the next price bracket up. Space Adventures has partnered with Armadillo Aerospace to provide suborbital spaceflights at a price of $102,000 per ticket, with more than 200 tickets already reserved.

XCOR Aerospace, based in the Mojave Desert in California, is yet another space vacation company. It offers a 30-minute flight at 330,000 feet on its Lynx ship at a cost of $95,000, including a $20,000 deposit. The company gave away a free ticket in February, only to find out he is a NASA scientist and may be unable to accept. That’s one major suborbital tease. 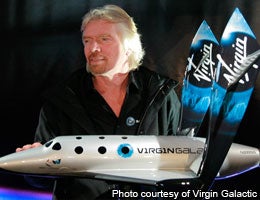 Who can forget the image of Lance Bass posing like he’s going to the astronaut prom? Though his push to reach space fell short, plenty of other celebrities are lining up to reach the stars.

One of the more marketed space tourism projects is Sir Richard Branson’s Virgin Galactic, while currently in testing, may begin suborbital flights in 2013. Last month, Ashton Kutcher became the 500th passenger to sign up for the voyage. The price tag is $200,000 per seat, including a $20,000 deposit. Tom Hanks, Paris Hilton, Katy Perry and Angelina Jolie are reported to have tickets as well.

“We have a very diverse set of customers,” says Sean Wilson, who is with a firm that represents Virgin Galactic. “Some are famous, most are not; some are very wealthy, some are not.”

“Clients from all walks of life are interested in Virgin Galactic, but at this stage there are not as many people with serious interest and the financial resources to purchase the flight,” says Jennifer Campbell, an owner of Explorations, a luxury travel company that offers flights aboard Virgin Galactic. “For many of the baby boomers that inquire, their interest with space began in the ’60s with Neil Armstrong and moon landings. They grew up with the promise of space travel.” 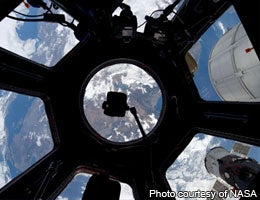 A bulk of what makes up the exorbitant price for commercial spaceflight is wrapped up in the research and development of the still-young commercial industry. It’s one of the rare instances when it is, in fact, rocket science. A launch needed for space flight requires an incredible amount of costly energy and precision.

“The price will always be expensive, but it will reduce in time when more vehicle manufacturers are launching their spacecraft and it’s a competitive environment,” Shelley says.

Wilson says he sees the company’s spaceflight prices possibly moving below $100,000 within the next decade.

“Our aspiration is definitely to bring the price down,” he says. “Historical analogies show that this is likely to happen. Financial success should encourage competition, economies of scale and new technologies, which should all exert a downward pressure on the end price.”

It may never be as cheap as booking a first-class ticket on a transatlantic flight, but the falling price of spaceflight may mean more dreams can come true.

“We know what a life-changing experience seeing the Earth from space is,” Wilson says. “To be able to offer that to individuals from all walks of life and from every country for the very first time is amazing.” 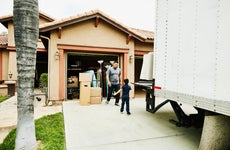 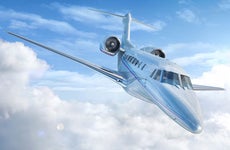 How much does a private jet cost? 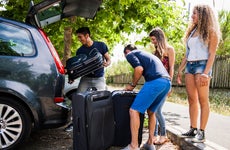 Gas prices vs. plane tickets: Is it cheaper to fly or drive this summer? 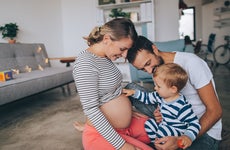 How much does it cost to have a baby?