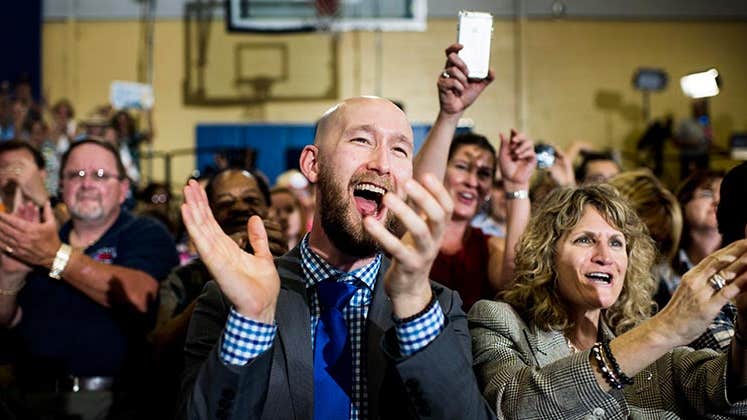 Partisanship is not confined to the voting booth or your bumper-sticker collection — it also works its way into your wallet.

An analysis of Bankrate’s Financial Security Index data shows that Republicans and Democrats view the current state of their finances differently, and take substantially different approaches to managing their money in many respects.

It’s important to note that independents, who account for 35% of respondents, are most pessimistic about their finances, scoring a 97.

The FSI measures how Americans are feeling about their overall finances by polling them about indicators of financial well-being, such as their level of savings, compared with a year ago. A score of over 100 means that people are doing better than they were last year, so you can see the split: 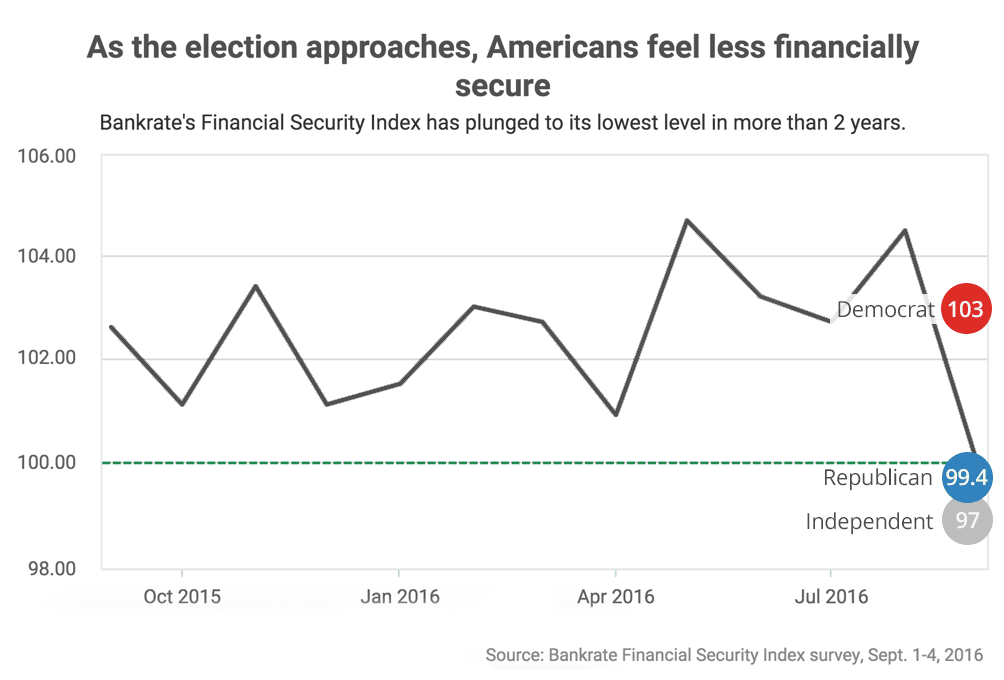 Democrats are feeling substantially better off compared with a year ago, while Republicans are not.

The split may come down to how partisanship is increasingly affecting Americans’ attitudes about things that may seem totally unrelated to politics, says Aaron Weinschenk, an assistant professor of political science at University of Wisconsin Green Bay who has extensively researched the issue.

In fact, the political climate affecting people’s sentiments about their personal finances isn’t a new phenomenon, says Weinschenk. He recalls research done in the period leading up to the 2000 election, when Republicans had negative views on the economy even as GDP and median income were clearly on the upswing. And, says Weinschenk, it cuts both ways.

“I think polarization has kind of amplified that for people. They’re really tuned in to the parties and the economy and maybe they don’t want to say that things are doing so well when somebody they don’t like is in office,” he says.

But while it’s not new, the effect may be increasing in intensity.

Should Republican presidential nominee Donald Trump win the White House in November, Democrats’ feelings of financial well-being could flip dramatically from positive to negative, even if nothing about their actual finances does, Weinschenk says.

“The gap has gotten wider between Republicans and Democrats,” he says.

A partisan divide on handling money, too

Reaching back into our polling data, Bankrate found some significant differences between Republicans and Democrats on how they handle money matters.

Todd Mulbarger, a 47-year-old small business owner in Woodbridge, California, who has voted Republican in the past, has seen his personal financial situation improve over the past year.

He owns 8 Great Clips franchises and expects revenues to increase substantially, and that kind of success has allowed him to save more for retirement than in the past.

“I’m definitely feeling stronger about my personal finances,” he says.

As far as his approach to money goes, like many of his fellow Republicans, he keeps an emergency fund on hand and uses a credit card. But Mulbarger, who just put a daughter through college, differs from a substantial chunk of Republicans in our poll who believe that a college education, even at today’s prices, is a good investment.

He also isn’t among Republicans who expect Social Security to run dry completely by the time he retires. In his opinion, either party proposing a complete phase-out of the program would be an example of “political suicide.”

In the last year, he says, his family has seen their income fall, by choice. Kofke’s wife recently switched to a part-time job to be able to spend more time with their daughters, and Kofke took a lower-paying job that was more in line with his interests. However, because of diligent saving and financial management, he thinks their overall net worth is still higher than it was a year ago.

“So many people put this huge emphasis on the election — they place such an importance on who the president is. But for most of us, it really doesn’t matter who the president is,” Kofke says. “If I do what’s right with my money and handle my finances correctly, then I’ll be OK.”

It really doesn’t matter who the president is … If I do what’s right with my money and handle my finances correctly, then I’ll be OK.

Oraynab Jwayyed, a Democratic voter in Oklahoma City who works as a mortgage risk analyst and assists women in money management, says she’s better off compared with last year, as well. Coming off of a divorce 3 years ago and working to establish her financial independence since then, she’s managed to buy her own house and car while still saving for retirement — a big priority for her.

Still, Jwayyed says she’s concerned about what a Republican presidency would mean for her finances.

I just believe that conservatives have different priorities than I do.

Even though she’s done well personally by managing her money and being able to save, she says she still worries about the performance of financial markets.

“Whoever makes it into office will have a lot of tough decisions to make” about how to deal with an economy that’s shown inconsistent progress, she says. “I just believe that conservatives have different priorities than I do.”

Jwayyed, who has both bachelor’s and graduate degrees, is among the Democrats who believe that college is a good investment and who believe that Social Security will provide some income in retirement.

One place where she breaks with some other Democrats? She keeps a liquid savings account she could access easily to pay off an unexpected expense. She also uses credit cards and invests in stocks, 2 practices that we found Democrats tended to do in lesser numbers than Republicans.

“Stocks are long-term,” she says. “But over time, you do get a better return on your investments than anything else that’s out there. So they are worth it, but you just better have some patience.”