Skip to Main Content
5 min read Published December 07, 2012
Written by
Dana Dratch
Written by Dana Dratch Personal Finance Writer
Dana Dratch is a personal finance and lifestyle writer who enjoys talking all things money and credit. With a degree in English and writing, she likes asking the questions everyone would ask if they could and sharing the answers — along with smart money management tips from the experts.
Dana Dratch

If you really want to test your forecasting skills, try picking which toys will be hot this holiday season.

While it’s almost impossible to predict which ones will catch the popular zeitgeist, there are a few toy trends that seem to endure — from technology to figures based on favorite characters.

“In the last couple years, those tech-inspired toys really tended to be popular,” says Kerry Smith, spokeswoman for Toys R Us.

Some toys are even making use of parents’ tech devices. “What we are seeing this year, and last year as well, is that companies are creating toys that interact with technology,” Smith says. Collectible dolls and child-development games are also big this year.

But ultimately, what determines if toys are hot is if kids really love them.

“One of our criteria was ‘What are the kids going to be talking to each other about?'” says Shawn Bean, executive editor of Parenting magazine, who tested toys for the magazine’s annual holiday toys list.

Want to get a few ideas for toys that won’t break the bank? Here’s a selection of toys that are expected to be popular — all for $25 or less. 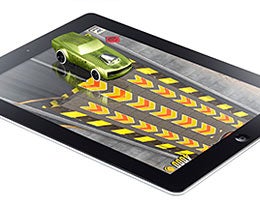 Want to turn an iPad into a Hot Wheels track or the backdrop of Gotham City?

A series of tablet-based toys aims to do exactly that.

How it works: Parents download a special app that allows the toy to interact with an iPad. When the child places the toy on the iPad’s surface, he can move it through that virtual world. Some of the toys include Hot Wheels, Batman, WWE Rumblers, Monster High, Fruit Ninja and Cut the Rope.

“Everyone has figured out that kids love playing on the iPad,” says Bean. “This turns the screen into a number of different interfaces.”

“It fits into a stocking,” says Bean. “And it’s really cool. I think it’s going to be one of the biggest games of the year.” 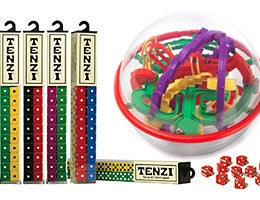 Billed as “the world’s fastest game,” Tenzi is “a real frenzy of a game — real quick,” says Kathleen McHugh, president of the American Specialty Toy Retailing Association. Kids can play it, but it’s one of those games that adults love, too, she says.

The object: Each player gets a different-colored set of 10 dice. “Someone says ‘go,’ and everyone keeps rolling until they get the same number on all 10 dice,” she says.

One Tenzi set accommodates four people, but extra sets can be purchased to outfit as many players as needed. “So if you have a big family gathering, you can picture being at the dining room table — and people going at breakneck speed to win,” says McHugh.

A ball rests in a maze inside a clear plastic globe. The goal is to get the ball to go through the maze by turning the globe.

“It’s really a challenging game,” says McHugh. And, as she recently learned, it fascinates kids of all ages. Returning from one convention, “We’re sitting there in the airport, and no one’s talking — we’re all working on our Perplexus,” she says. 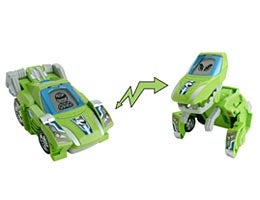 One trend that seems permanent is electronic toys. This one combines that with a Transformers-like quality — where a toy can be vehicle one minute, then — after a twist and a click — changes into a dinosaur. Or vice versa.

The electronic part is that the face is actually a little LCD screen, Bean says. Kids scroll through and add the faces they want. “And it makes noises — it roars when it’s a dinosaur,” he says. “Those are really cool.”

“What’s great about this is it’s just a couple of steps, and it’s an airplane into a dinosaur or a dinosaur into a robot,” he says. “Little kids can do the conversions themselves. And because it doesn’t take a lot of work, it’s good for fine motor skills.” 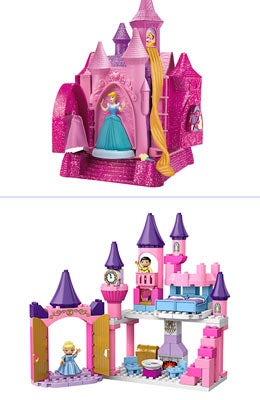 “Disney princesses are hot and will continue to be hot,” says Adrienne Appell, spokeswoman for the Toy Industry Association. And that’s especially true of perennial favorite Cinderella — who’s “had her look refreshed” this year — as well as the new princess on the block, Merida from “Brave,” she says.

Here are two Appell believes will be on wish lists this year:

Think of this as a 3-D paper doll. It comes with princess figures, and kids get to create their dresses out of Play-Doh in whatever colors and with whatever embellishments they want.

Duplo blocks are for younger kids, so it’s not as intricate as traditional Legos. Kids can “build” Cinderella’s enchanted carriage, her faithful steed and the castle arch — complete with a block of a clock striking midnight — then play with them. The set includes a Cinderella figurine and a Duplo block emblazoned with that missing slipper. 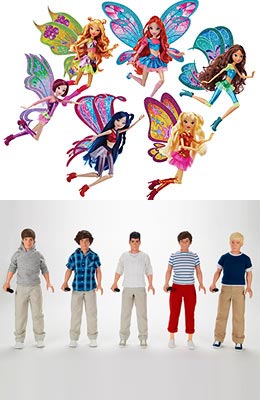 Posable, collectible dolls are perennial favorites. Here are two that are expected to be hot this year:

Based on a popular television series, these characters are teenage girls who have a secret life as fairies.

“Sparkly wings snap on and off to transform their doll into a fairy, like they do on the TV show,” says Smith.

Harry, Louis, Liam, Niall and Zayn make up the hit singing group known as One Direction. Each doll comes with its own outfit, shoes and microphone.

“These are brand-new this year,” says Smith. “And they’re already really popular among our customers — so we’re expecting them to top wish lists.” 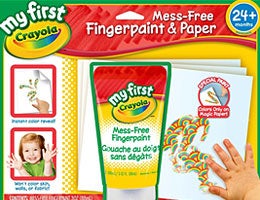 All the tactile fun of finger painting with none of the messy danger to walls, floors and furniture.

Prior to this one, “We’ve been flipping our sofa cushions so many times, we’ve run out of sides,” says Bean. But with this set, “The paint only works on the special paper that comes with it. It wipes right off of fabric and walls.”

As a result, “It really allows them to go crazy,” Bean says. “It’s a really fun way for them to get creative and artsy.” 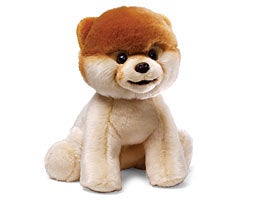 Unless you’re living without TV or Internet access, chances are you’ve heard of Boo. Billed as the world’s cutest dog, the pup has nearly 6 million Facebook friends and a book deal. And now, thanks to Gund, he also has his own stuffed doppelganger.

The 8-inch toy is “a great little stuffed animal, and it has some pop-culture (following) to it,” says Bean.

And while it actually hit the market last year, some toy watchers think it will be pretty popular this holiday season.

And when Parenting magazine tested toys this year, Boo was equally popular with both a 3-year-old girl and one of the fashion editors, says Bean.

“Find the right adult, and they’ll love it,” he says. 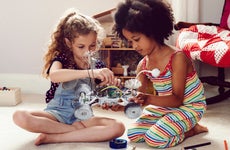 Top toys for kids and how to save on them

What to buy in November: From Black Friday doorbusters to holiday toys 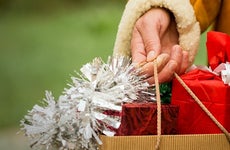 Great holiday gifts for $10 or less