Powerball mania is back.

After Saturday’s multi-state drawing came back with no winners, the Powerball jackpot has reached a monstrous $750 million, making it the fourth-largest lottery prize in U.S. history. That number will continue to climb if no one wins in Wednesday night’s drawing.

If someone does win though, the first thing that will come to mind is: What in the world does someone do with $750 million, or even a smaller, but potentially life-changing prize such as $2 million?

While it might be tempting to splurge, a winner should remember that they won’t be receiving the entire jackpot. For a winner who chooses the cash option (what most winners have chosen since 2003), their winnings would immediately be reduced to $465.5 million, according to Powerball’s website. Once taxes kick in, CNBC says winners could pay as much as $172.2 million in federal withholding and taxes, assuming there was no reduction to a winner’s taxable income.

Regardless, $293.3 million (before state taxes, which vary but can be as high as California’s 13.3 percent rate) is still a pretty penny. Instead of getting wild with the money, a winner should also think hard about making responsible financial decisions that’ll pay off in the long run and help keep the new multi-millionaire from going broke in the not-so-distant future.

Here are five money moves to make if you win the Powerball jackpot (or any lottery for that matter):

All of that pesky credit card debt that’s been lingering around on your credit report? It’s time to pay it off.

Debt is a major roadblock when it comes to establishing healthy finances. A recent Bankrate survey found 13 percent of Americans say they aren’t saving more because of the amount of debt they’re carrying.

A Powerball winner should start hacking away at their big-ticket debt, including their mortgage, student loan debt or back taxes. Once current debt is paid off, taking on new debt should be approached with caution.

“It might be tempting to more heavily rely on leverage or borrowing to try to maximize their winnings, but that means taking on more risk,” says Mark Hamrick, Washington Bureau Chief at Bankrate. “Whether one has typical financial resources or has recently obtained a windfall, it is critically important to live beneath one’s means.”

Americans are bad at saving; 60 percent of them can’t afford to pay for a $1,000 expense with funds from a savings account. Winning the Powerball jackpot would be a great opportunity to finally catch up on building an emergency fund — and then some.

How much a winner chooses to save is dependent on their individual situation and may best be determined with the assistance of a certified financial planner. But regardless of how much of the jackpot a winner stashes away, they should be smart about where they do it.

Matthew Goldberg, an analyst at Bankrate, says there are generally no deposit limits in non-qualified accounts (meaning accounts holding money that’s already been taxed), but there are limits on how much the Federal Deposit Insurance Corp. (FDIC) will insure, should the bank fail. The standard insurance amount is up to $250,000, but winners can get strategic with their accounts so they’re insured beyond that limit.

“FDIC insurance limits need to always be confirmed, especially when we’re talking about a large sum of money,” Goldberg says. “Utilize the FDIC’s Electronic Deposit Insurance Estimator (EDIE) tool and double check with your bank to make sure your money is in an FDIC-covered account within FDIC insurance rules and limits.”

Another option for saving is to put funds into a certificate of deposit, also referred to as a CD. These accounts are viable options for consumers who don’t need the money readily available and plan to save for many years. Some banks offer three-year CDs with more than 3 percent APY.

“Spreading the winnings out between savings accounts and different-termed CDs can help you both earmark the money for different needs and get a maximum APY,” Goldberg says. “It may also establish some buckets of money for spending, and more buckets separated for saving.”

A Powerball winner is essentially a millionaire made overnight, for basically doing next to nothing —  but that’s not necessarily a good thing.

When people learn of someone’s winnings, they might yearn for their portion of the pot. This includes from people the winner might not even know, and it could put them at risk.

Instead of claiming the winnings right away, a person who hit on all of the numbers might want to consider waiting a few days before going public about winning.

Yes, it’s exciting to obtain a financial windfall — but it also puts a target on your back for fraud and criminal activity. Be proactive in protecting yourself.

Lawrence Solomon, MBA and a certified financial planner at Mercer Advisors says a Powerball winner should take time to hire a good attorney to help them update their estate plan and establish a trust. In doing so, their winnings (and legacy) will be controlled and protected, should they die or become incapacitated.

Additionally, an estate lawyer can help with tax savings on the estate.

“In 2019, the federal estate and gift tax exemption is $11.4 million per individual. That means an individual can leave $11.4 million to heirs and pay no federal estate or gift tax, while a married couple will be able to shield $22.8 million,” Solomon says. “Anything above the exemption amount basically gets taxed at a rate of 40 percent, so if someone wins the powerball and elects the lump sum payment, they are really going to need a good estate planning lawyer!”

A revocable living trust also protects a winner because they’re able to alter the trust as needed into the future.

Managing money is an emotional experience for consumers. To keep an objective handle on a  massive amount of finances, a Powerball winner should consider hiring a trusted financial adviser. These individuals will be able to help a winner come up with a plan to help stretch their earnings over their lifetime.

Winners should also take into consideration how the jackpot will affect their taxes. Holeman recommends hiring a certified public accountant (CPA) to help navigate the new tax brackets winners will find themselves in.

Keep in mind that the Internal Revenue Service (IRS) actually penalizes individuals who don’t have the proper amount withheld in taxes during the tax year. Investing in a CPA to help make sure a lottery winner is on-track with their taxes throughout the year will help them save money.

The low odds of winning: Should you even play?

The odds of winning the Powerball are slim — as in, one in 292 million slim. But still, more than one-fifth of Americans (21 percent) buy at least one lottery ticket during the typical week, according to a 2018 Bankrate survey.

Not buying a ticket, though, could still earmark you as a winner in the long-run.

Given the low odds of winning a lottery, a weekly $5 ticket could be better spent elsewhere. This could mean putting it in a savings account or funneling it into paying down credit card debt; in a year, that could be an additional $260 invested in your future.

Additionally, lotteries tend to target lower-income people. The Bankrate survey found the lowest-income households in the U.S. spend an average of $412 annually on lottery tickets. This demographic is also more likely to buy multiple tickets, according to Bloomberg — which means they’re the ones who keep the games running.

Overall, consumers might want to think twice before betting their odds.

“For a long-term return on the money, putting money into savings or low-cost mutual funds or exchange-traded funds (ETFs) will almost certainly have a more positive outcome than hoping to beat multi-million to one odds with lotteries,” Hamrick says. 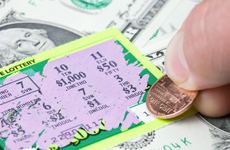 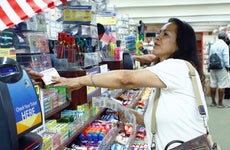 Tips for getting the sweepstakes advantage