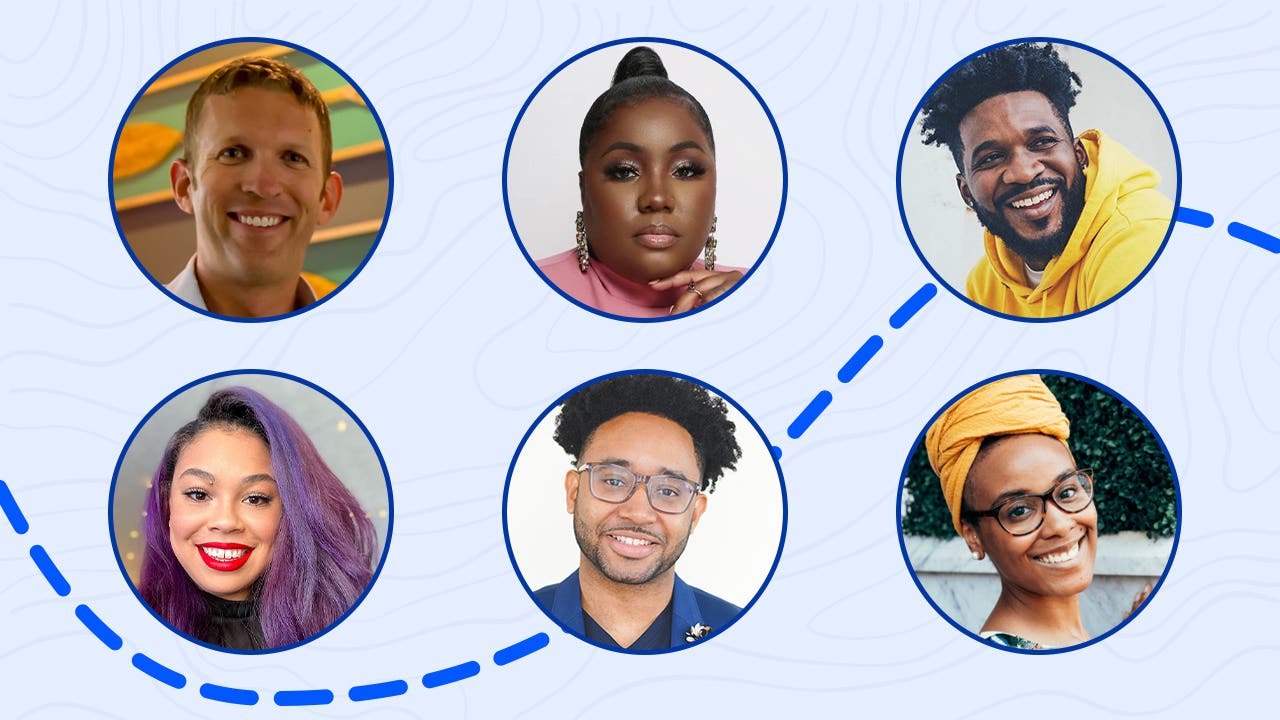 You know that one thing that you’re totally obsessed with and can’t seem to stop talking about? Maybe it’s a sports team, that TV show you can’t stop binging, or some other fun hobby you really enjoy.

For this particular group of ‘fin-influencers’, it’s the topic of personal finance that they can’t get enough of, and we’re not complaining. After all, it’s their passion for the subject that’s inspiring others to embark on their own financial journey, and that’s something we will always support.

This is a lesson that Corey Paul, co-founder of the Literacy Kings podcast, is deeply passionate about as it’s one he wished someone told him sooner.

Essentially what this means is that anytime you make money, you should automate a portion of it to specifically go in the direction of investing and saving. By doing this, Paul says it’s a step towards investing in the most important thing: yourself.

“I believe that doing this really sets the tone for financial success,” says Paul.

Paul and cost-host JaMorcus Trayham grew up in a Houston neighborhood where the school dropout rate was 30 percent and financial literacy was far from the focus in their curriculum.

However, as adults, they realized how behind the curve they were, so they started Literacy Kings as a way to encourage financial literacy in communities similar to the one they grew up in. Together, the hosts break down popular finance books with the goal of making the content more digestible and relatable to their audience.

“The people I speak to, we don’t come from excess; we come from lack. So if you’re waiting to have excess to invest, you probably never will,” said Paul on why he’s so passionate about sharing this financial lesson.

2. Stay involved in your finances

Tracking your expenses can be a headache, we get it, but think of it this way: There’s never going to be anyone that’s going to advocate for your finances more than you. That’s a word from the wise Dasha Kennedy, a financial activist and educator known online as @TheBrokeBlackGirl.

Kennedy came to this realization when she was short just $20 on an electric bill.

“When I went to review my bank statements, I had spent $20 probably 20 times on nothing… but I didn’t keep track of that, so when it came down to me actually needing $20, I didn’t have it,” says Kennedy.

Kennedy said the most challenging part about the situation was coming to terms with the fact that the only thing standing in between her and her lights being cut off was $20 — $20 that likely went towards expenses she could have avoided like ATM fees, vending machines or food, and highlighted the importance of staying involved in your finances.

Since then, Kennedy has been a strong advocate for knowing where your money is going. To keep herself accountable, she has a weekly money date with herself where she reviews all of her expenses for the week. Doing this has not only helped her feel more comfortable with her money, but it’s also helped her become more comfortable talking about it with others.

3. Separate your self-worth from your net worth

Let’s face it: It’s hard not to compare yourself to others — it’s just a part of human nature. But as Judith Jones, a financial advocate known online as @BudgetingBrokeGirl, reminds us: You are not your debt, and debt and/or wealth doesn’t determine your worth.

“It took me a while to separate my net worth from my self-worth,” says Jones. “By me focusing on it, I was missing the point of choosing to go on this journey.”

Jones says it’s important to remember your “why.” What motivates you beyond money? Why do you want to become financially independent?

Once you find your “why,” focus on that and try not to let yourself get caught up in comparing yourself and competing against others.

4. Make sure your mindset is aligned with your goals

When it comes to reaching your financial goals, it often starts with getting yourself in the right mindset first, as it affects how you navigate your day-to-day life.

That being said, your mindset can also play a role in how you navigate and manage your finances. That’s why Kenya Imani, a financial coach, is so passionate about teaching others about the abundance mindset in her coaching.

“It’s [the abundance mindset that’s] really what keeps you motivated while you’re on your personal finance journey and then after that, when you’re trying to build wealth or whatever your next step is,” says Imani.

At its core, the abundance mindset is the concept of a person who believes there are enough resources and successes to share with others. On a personal finance level, having this mindset allows you to feel plentiful, creative and inspired with your money — leading you to feel secure and confident with your finances.

So as Imani puts it: Rather than being like, “Okay, I did it. Let’s move on,” when reaching a financial goal, you will instead think about what next steps you can take to further improve your situation or will have a better understanding of the things that could set you back.

“Just because you paid off your debt doesn’t necessarily mean that you are not ever going to get back into debt,” says Imani. “So I think the mindset piece helps you figure out the reasons why you got into debt in the first place and how can I stay out of it.”

When it comes to building wealth, one of the most effective ways to do so is through investing. Getting started can be scary, but the earlier you start, the more time you have to grow your wealth.

“Even if it’s $20 a month… Put your money away early,” says a financial educator known online as @ForBetterOrWorth. “Time is the great equalizer when it comes to wealth building. The earlier you put money away, the less you will worry and the less you will have to do down the line.”

A good place to start is by investing in total market index funds, like the S&P 500 index fund. These funds are a great base for your investment portfolio as they allow you to have a solid, diversified and low-cost collection of investments. Historically, index funds have offered a solid return of around 10 percent per year. So while the idea of picking stocks may sound exciting, it can be a risky move for novice investors — just keep it simple and stay consistent to start.

6. Give yourself a raise and pay off your debt

If you’ve ever had debt or are currently in debt, then you know how much of a burden it can be. That’s why having a debt repayment plan is so important.

The way Leo Jean-Louis, a millennial debt freedom coach, sees it, paying off your debt is like giving yourself a pay raise. Who doesn’t want that?

Not only is it stress-relieving, but it’s also a vital step to take if you want to grow your wealth.

“Every dollar that goes towards interest on your debt is a dollar that you can’t use to build wealth,” says Jean-Louis.

Of course, paying off debt can be easier said than done, but taking the time to craft a dedicated plan puts you one step closer to becoming debt-free. One approach Jean-Louis recommends is to look for ways to increase your cash flow so that you can use your money and have it working for you, not against you.

7. Live below your means

If you were to ask any successful person how they got rich (and stayed rich), they’d probably tell you that the key to success is living below your means.

Essentially, spend less than you make and invest the difference. This is something that Jeremy Schneider, a self-made millionaire and founder of Personal Finance Club, is always stressing to his audience of aspiring millionaires.

Marc from BetterWallet is also a firm believer in this lesson.

“On average, many financial goals are easily attainable without making another dime,” says Marc. “What’s important is that you control your spending by limiting unneeded, non-value-adding purchases.”

Learning how to manage the money you have now is essential because when you eventually make more, you’ll know how to put it to work, says Marc. Ultimately, if you want to be rich, then you have to fight against lifestyle inflation.

Credit cards can be both very rewarding and very dangerous. The difference is knowing how they work and how you can use them responsibly.

“Once a person understands how to leverage credit properly, it can set them up in so many ways in the future,” says Herman Dolce, financial educator and CEO of Bella Sloan Enterprises.

Your credit score is a determining factor in many of life’s pivotal moments, like applying for an apartment, buying your first home, getting a loan and so much more. A bad score can hold you back from some of these opportunities and may even prevent you from saving money in some cases due to poor credit history. Credit card debt is another factor that could have a negative effect on your financial life.

Nonetheless, there are steps you can take to improve your credit, the first being to understand how it works. Once you’ve got a grasp on that, you can work towards repairing your credit.