As a self-employed online entrepreneur, Luke Barber dabbles in a wide range of pursuits: developing mobile apps, running his own car rental platform and selling digital products, to name a few.

His favorite way to spend time, though, is documenting his family’s adventures on the YouTube channel Barberettez. In late 2016, a video of Barber and his wife, Hollie, building a triple bunk bed for their three daughters amassed more than 2.7 million views.

However, there was one issue keeping Barber up at night: The family owned the bunk bed, but they didn’t own the house.

“I knew I shouldn’t be renting,” Barber says. “I needed to put on some big boy pants and buy a home.”

As Barber was thinking about how to leave the renting world behind, the family was gearing up to welcome a fourth girl.

“We bought the house at the perfect time,” Barber says, laughing. “We closed the last week of August and had a baby one week later.”

Despite their growing family, the house the Barbers purchased in Panama City Beach, Florida, was approximately 700 square feet smaller than their rental. While downsizing was necessary to afford the home and begin building equity, the property was the opposite of move-in ready, which was actually part of the appeal. The couple enjoys watching home renovation shows and wanted a fixer-upper.

“The carpet has all been destroyed,” Barber said in a video tour. “This place has not been taken care of at all. It smells like a wet dog.”

Barber was ready to add to the destruction. In fact, he says that within one hour of going to the title company and getting the keys to the new house, he was smashing a sledgehammer into the walls. His plans weren’t just a wild swing: His eyes were always directed toward the budget.

“We bought most of our materials from Home Depot with a six month line of credit,” Barber says. “I did most of the labor, chiseling up tile floors, taking down walls and putting in the sweat equity.”

Even for the jobs that called for outside help — Barber hired a friend to handle some plumbing needs, including relocating the water heater — the family considered how to shrink expenses.

“The water heater was a difficult job that required going through the ceiling,” Barber says, “so I asked if I would save some money by climbing up in the attic to run the pipes.”

The remodeling plans involved gutting around 60 percent of the house on a three-month timeline. While the project was focused on beautifying the home, the enhancements were also designed to make living there more affordable. For example, the previous owner had finished the garage and converted it to a bedroom, but there was no insulation. The utility bills averaged $450 per month when temperatures were high. Barber’s insulation addition made a huge difference in the monthly budget: The monthly power bills shrunk to $150.

However, “like most renovations, it ended up being more work than we anticipated,” Barber says.

The project wasn’t complete by the time their lease was up, so the Barbers moved in with no doors and no floors. The first few rounds of dishes were washed in the bathtub. Barber’s father, who helped with some of the work, was electrocuted along the way — something that Barber can laugh about now, since his father was okay.

When all was said and done, the DIY approach managed to save the family at least $30,000. Based on videos of birthday celebrations and movie screenings on the family’s YouTube channel, it’s clear that the house quickly became a home.

A first home isn’t often the forever home, though, and in June 2020, the Barbers welcomed their fifth daughter. At the same time, Barber was watching home prices soar as the pandemic pushed real estate values to record highs while mortgage rates dropped to record lows.

“The market we’re in is nuts,” Barber says. “People are paying way above the asking price.”

Barber had already been contemplating how to get involved in real estate investing. By partnering with a friend, he figured he could put his home renovation skills to work, buying fixer-uppers for cash and then flipping them in a process known as wholesaling.

Barber began working on a test property in the summer. Then, he realized he might not want to sell it to anyone else.

“It has an extra 500 square feet and a huge yard,” Barber says. “I thought maybe we should just move into it. Financially, it seemed like a really smart move.”

Hollie was on board with the decision, but she had two conditions: They needed to sell their current home themselves to eliminate paying commission fees to real estate agents, and they needed to list it high.

“People buy on emotion,” she told him. “Let’s list it high.”

After settling on an asking price of $399,000 — nearly $40,000 higher than the comps in the neighborhood — the couple listed the home on Zillow, and received three offers on the first day. One of the offers was from a couple of real estate agents, and Barber offered them a 1 percent commission to handle all the paperwork duties.

Thinking back to that 2016 realization of the need to start building equity, the Barbers did more than upgrade a house. The math shows they made a major upgrade to their finances, too: They bought the house for $188,000, invested $30,000 and paid their buyers just under $4,000 to eliminate the paperwork headaches. All of that added up to a $177,000 boost — Barber’s “big boy” profit, realized.

For your next project: Home renovation tips

If you’re considering your own fixer-upper or home improvement project, you’re not alone. A recent survey by DEWALT revealed that more than 70 percent of homeowners are planning or considering a home renovation project in the next six months. Some of those projects are big, too: Nearly 30 percent are planning to spend at least $30,000 on the work. Remember these five key considerations before you start knocking down any walls:

1. Get ready to spend

Home renovation prices soared in 2020, and those higher costs are sticking around for the time being. Compare different types of supplies to see if using different materials can help lower your price tag. If you aren’t doing the work yourself, be sure to get multiple quotes for the project to find a licensed professional who can help you save.

2. Know what adds value — and what doesn’t

It’s your home now, but are you planning to sell it later? The Barbers’ renovation clearly added value. Do your homework to know which enhancements will make the most positive impact on your list price down the road.

Your budget likely includes supplies and contractor fees, but you’ll want to account for surprises like permits, clean-up fees and other hidden home renovation costs.

4. Research all your borrowing options

The line of credit from Home Depot served Barber well, but he admitted he wished he had known about loan options that included funds for renovations prior to applying for his mortgage. Options like the Fannie Mae HomeStyle or FHA 203(k) loan can help homebuyers secure the funds for a purchase and a renovation project at the same time for a low interest rate.

Be wary of putting too much on credit cards: While a Bankrate survey last year found the majority of homeowners use credit cards for home improvements, high interest rates can quickly turn your dream home into a debt nightmare.

If you’re hoping to start your project now, be prepared for a delay. The supply chain disruption from the pandemic and the rush to renovate has created a big wave of business for home improvement work. The DEWALT survey shows that the majority of homeowners who are working with contractors have to wait at least three months to get started. 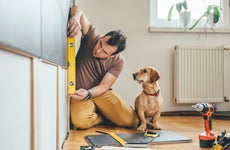 Smart ways to use your home equity for remodeling 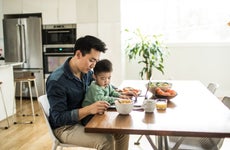 How to build equity in your home 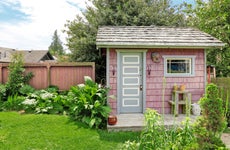 Struggling to get your finances in shape to buy a house? This startup wants to help