Editor’s note: The subject was compensated for participation in this story and Bankrate’s “For Every Next” advertising campaign.

Domonique Cynthia became famous for her recorded reaction to getting accepted into the University of Pennsylvania.

“Prior to the video, the content I was creating was whatever the trend was, like the Cinnamon Challenge,” she says. “If it wasn’t for the acceptance video, I do not think I would be making the content that I am now.”

The content creator parlayed that viral video into a budding online empire in which she makes videos about the college experience with a focus on minority representation and mentorship — even while she’s still in school studying as a media and entertainment management major.

Smart financial planning, she says, has been a key part of her journey to college and has helped keep her on track since she became an internet star.

“My sister had attended Penn and we’re four years apart,” she says. “We knew the cost, and my father had a talk with me and made me aware that I would have to contribute a portion,” she adds. “I knew before going in that it would be rather expensive.”

Her parents had saved up to pay for part of her education, but she knew she would need to contribute — and take on debt — to attend the school of her dreams.

Domonique, currently a junior, says she knows how important it is to keep on top of her debt in order to minimize how much she’ll owe when she graduates. She’s especially thankful that she has income from her social media channels to help.

“Even though I have money coming in, I do have student debt. I also have responsibilities that I need to save money for,” she says. “It’s made my post-college life feel a little bit more positive. I’m more optimistic because I’ve been saving throughout college, which I don’t know if I’d be able to do without my channel.”

For many millennials and Gen Zers, student debt is a big hindrance to reaching other financial milestones like saving for retirement, building an emergency fund and, of course, purchasing a home after college. Younger people are much less likely to buy homes in their 20s, in large part because student loans complicate the finances of such big-ticket purchases.

Reinvesting for the future

Domonique’s main goal for now is to be in a strong position to pay off her student loans. She says that keeping her financial goals in mind makes planning easier and helps her avoid some spending temptations.

“Maybe I can’t afford this now, but in the future if I keep saving or budgeting, I can,” she says. “To make sure to save is the most important thing for me.”

Domonique hopes to continue in the content creation business after school, and is setting herself up for financial success by establishing good saving and spending habits early on. She also invests in stocks, particularly startups, and has established a scholarship fund, the Pay It Forward Scholarship, which she sees as an investment in the future in its own right.

“All the money I make from my channel I try to use for school or to reinvest into the business itself,” she says. “Having my channel has helped a lot financially.”

She’s also working toward a longer-term financial goal: owning her own media company one day.

If you’re struggling to grow your bank accounts and pay down your debt, check out Bankrate’s guide to saving. Domonique is already ahead of the curve on some of that advice — like picking up a side hustle to support your lifestyle — but you don’t have to be a famous YouTuber to practice good financial behaviors. Some other top tips include planning ahead for big purchases, evaluating your costs and figuring out where you can trim your spending.

Debra Johnson-King, executive director of Global Empowerment Development Corporation, a HUD-approved housing counseling service, previously told Bankrate she explains budgeting to her clients this way: “Every dollar has to have a home, whether it’s rent, mortgage, utilities, food, what have you.”

It might seem intimidating to change your financial habits at first, but small steps and a little extra attention can go a long way toward helping you save and keep debt down. Keeping your financial goals top-of-mind, too, like Domonique, can put you on the path toward achieving them that much sooner. 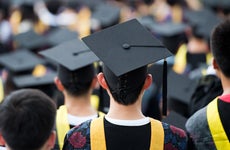 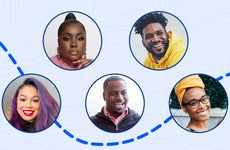 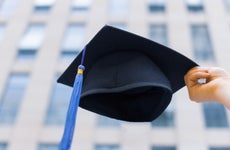 Bankrate experts: One financial lesson we wish we knew after graduating from college 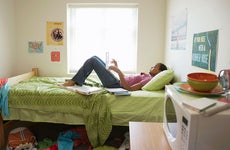 College students: Here’s what you need to know for a financially stable future