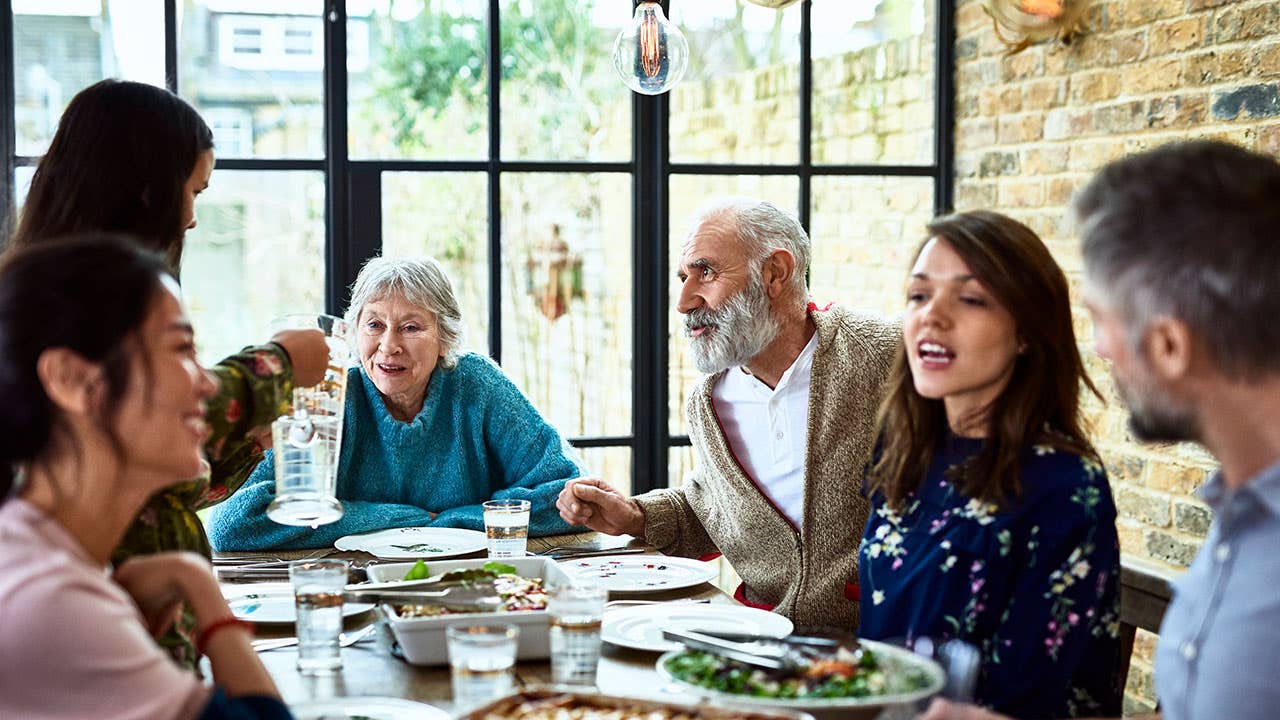 Parents are responsible for taking care of their children, and that means emotionally, physically — and financially. But how old is too old to be receiving money from mom and dad?

A new Bankrate survey on financial independence looked into the average age Americans think individuals should start paying for their own bills, including car payments, cell phone bills and student loans.

The journey to independence has changed in recent years as “helicopter parenting” and prolonged education continue to create more co-dependent financial relationships between parents and children. But the data from this new survey reveals an alarming trend: 50 percent of Americans say they have sacrificed or are sacrificing their own retirement savings in order to help their adult children financially.

The higher the bill, the longer parents are willing to foot it

Bankrate asked Americans at what age they thought a person should start paying for their bills. Most of the results dovetailed the traditional mindset that 18 is the golden age of adulthood — except when it came to big-ticket items.

Car payments and insurance, cell phone bills, subscription services, travel costs and credit card bills all had the majority of total respondents saying that individuals between 18 to 19 years old should be paying for these bills themselves.

For example, the average age respondents expect individuals to start paying for their cell phone bill was 19 years old. Younger generations, or Gen Z and millennials, both said that age should be 20; Gen X and the silent generation said 19, while Boomers said 18.

All generations agreed the average age someone should start paying for their subscription services is 20 years old.

As the bill gets more expensive, however, the average age expectation starts to increase and vary by generation.

Millennials, Gen X and the silent generation agreed that car payments should be paid at an average age of 20, whereas Gen Z said 21 and Boomers said 19.

Overall, respondents said individuals aged 23 should begin paying down their own student loans. One might assume wealthier households are more willing to help pay off massive student loan debt, but that wasn’t the case. Respondents with household incomes under $30,000 said the average age for individuals to start paying their own student loans was 24; households with incomes from $50,000 to over $80,000 said that age should be around 23.

Housing costs also had a higher average age overall, at 21 years old. Gen Z and millennials agreed the average age to start paying rent or a mortgage was 22, whereas Boomers, Gen X and the Silent Generation all said 21.

The highest age of them all? It’s for paying health insurance. Overall, respondents reported 23 as the average age individuals should start paying for their own premiums. Millennials, Gen X and Boomers all said that number should be 23; Gen Z pushed to 24. The Silent Generation said 22.

Putting retirement at risk to help their kids

The most alarming finding of the survey isn’t that parents are helping their adult children — it’s that the majority of them say that helping is hurting their financial futures.

In total, 50 percent of respondents say they have sacrificed or are sacrificing their own retirement savings in order to help their adult children financially. Half of Gen X and Boomer respondents said the same. 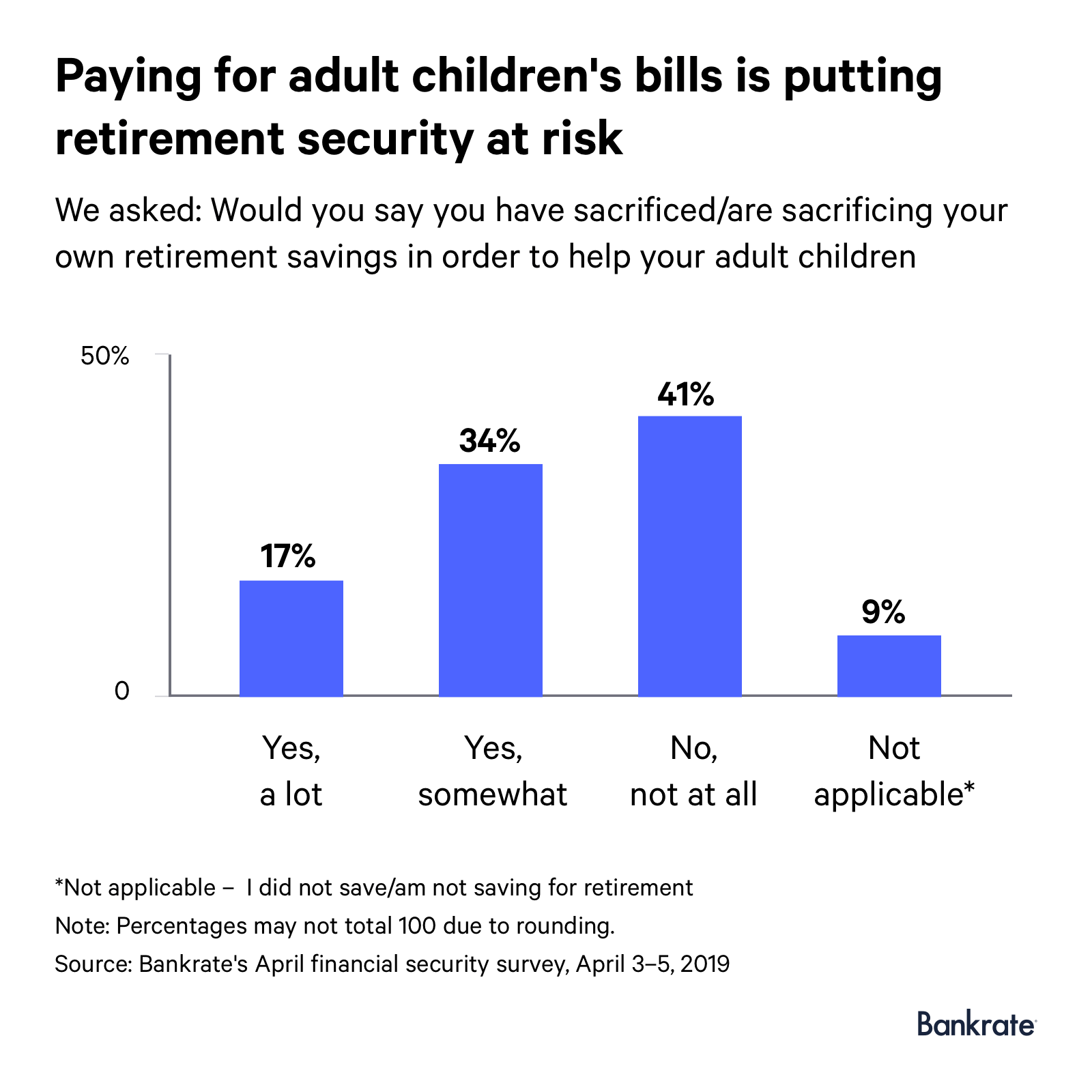 The retirement crisis in America is an ongoing worry for Americans. As companies have shifted away from offering traditional pension plans to employees, much of the responsibility in planning for financial life after work now relies heavily on individuals. Unfortunately, some are struggling to keep up.

A March 2019 Bankrate survey found that more than 1 in 5 working Americans aren’t saving any money for retirement, emergencies or other financial goals. Major barriers as to why respondents said they weren’t saving included not making enough money and large debt payments.

As some Americans reach retirement age and realize they may not have saved enough, they find themselves being forced to work longer than planned. In 2017, the labor force of Americans ages 55 and up accounted for about 23 percent of the average annual labor force. The Bureau of Labor Statistics estimates that by 2024, that figure will increase to almost 25 percent.

For a country where many people are already struggling to navigate their financial futures, the data isn’t encouraging.

Some may argue that financially helping adult children may be turning them “soft.” So why are people doing it?

Mark Hamrick, Bankrate’s senior economic analyst, says there are a variety of reasons parents might feel compelled to help their adult children financially — and they don’t all have to do with spoiling or enabling them.

“This is, for better and worse, the new normal because of the evolving approaches parents have taken to raising their children,” Hamrick says. “And it’s a result of some of the ongoing financial challenges that many families face, some of which were caused by the financial crisis and the Great Recession.”

Some of those challenges include a lack of substantial wage growth, according to Hamrick. Although recent employment reports show gains, he describes that as a “relatively modern phenomenon.”

Other culprits include the rising cost of education and the rising popularity of higher degrees.

“This is the ironic, unintended expense of people staying in school longer,” Hamrick says. “The way young people come of age has changed somewhat over the past 50 years or even longer — there’s no longer a sense of immediate need for young people to enter the workforce, even on a part-time basis.”

And when you’re not working, you can’t pay the bills — that’s where Mom and Dad come in.

How parents can set healthy financial boundaries with their children

Although parents might want to help their adult children out by footing their bills, some experts say it might do more harm than good.

Dr. Laura Dabney, a psychiatrist specializing in interpersonal relationships, says parents who are sacrificing their financial futures for their adult children should reevaluate their assistance.

The conversation about cutting off financial assistance to children, Dabney admits, can be intimidating. Parents who have been providing financial safety nets for their child might worry about how discontinuing the aid might be received. Adult children who have been dependent upon the money might feel as though they are being treated unfairly.

But the longer the conversation is delayed, Dabney says, the more likely it becomes for resentment to start building from both parties, especially from the parents if the financial assistance is jeopardizing their retirement plans.

“You have to decide what works best for you and then present that,” Dabney says. “Start with being honest about that. And then, listen to the child — and maybe come up with a compromise. Take the two wants and needs from both sides and come up with a plan that works for everybody so there’s no resentment that eventually gets in the way.”

Dabney adds that overall, prolonging financial support for adult children isn’t helpful — no matter how much a parent might think it is.

“That thrill you get of stepping into adulthood — whenever you do that for your child, you’re robbing them of that great joy of figuring out and doing something on their own,” Dabney says. “It can be hurtful for those children for you to be ‘helping’ that much.”

Bankrate commissioned YouGov Plc to conduct the survey. All figures, unless otherwise stated, are from YouGov Plc. Total sample size was 2,553 adults, including 890 adults with at least one child 18 or older. Fieldwork was undertaken on April 3 – 5, 2019. The survey was carried out online. The figures have been weighted and are representative of all U.S. adults (aged 18+).