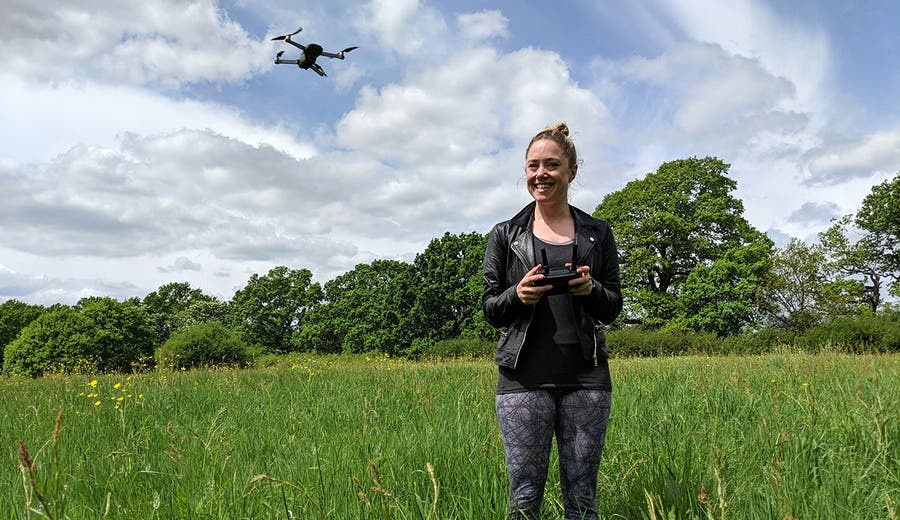 Coming up with the cash to buy your first home can seem like an uphill struggle in the face of rising real estate prices and higher interest rates. But today’s homebuyers have more ways to earn extra cash for a home down payment. Here we’ll cover some new gigs to make money from emerging technology.

Ten years ago most people wouldn’t have predicted that they could earn money as freelance taxi drivers or use their homes as makeshift hotels via services like Airbnb, but today you might be surprised to learn that someone in the next cubicle moonlights as a drone pilot.

As entry-level homebuyers face rising home prices and stagnant wages, despite an otherwise strong economy, getting a job with growth potential or a viable second job is increasingly important. The question is: which jobs should you focus on and which ones should give you pause?

“There are a number of jobs at risk,” says Darrell West, Brookings vice president and author of “The Future of Work: Robots, AI and Automation.”

He points to retail as a sector ripe for change. Self-checkout lines and the more extreme example of the fully automated  stores are just a couple examples of how some retail jobs will either evolve or be phased out altogether.

Amazon Go, the cashier-less, sleek store of the future, allows customers to walk in, get what they want and simply leave. Amazon bills your credit card using sensors that detect what you bought as you pass through the turnstile. By 2021, Amazon hopes to open some 3,000 Go stores.

“In some areas, taxi drivers will be phased out,” West says. “There’s a lot of automation coming in through the manufacturing sector, as well. As new tech emerges, jobs will disappear, but new ones will be created.”

Occupations that are projected to have the largest job declines between 2016 and 2026, according to the Bureau of Labor Statistics, are word processors and typists (-33 percent), computer operators (-23 percent) and electronic and electrical equipment assemblers (-21 percent).

For people looking for low-skill or on-the-job training type work, here are a few emerging occupations to keep your eye on.

The 3D printer industry is worth more than $7 billion and it’s growing exponentially every year, according to the 2018 Wohlers Report. As 3D printers become more consumer friendly, people have opportunities to cash in on their machines.

One way to do this is with 3D print on-demand services. Companies like MakeXYZ will connect you to local clients who want items printed and delivered in their area. Sam Zaila, CEO of MakeXYZ, has seen business steadily climb since he founded the company in 2013.

“You can buy a $300 or $500 printer off Amazon and start making money. The level of technical expertise goes up with the level of printer. The more experience you have, the more money you’ll make,” Zaila points out.

The difference between 3D printing and driving an Uber is that you don’t have to be totally engaged. He says some of the 3D printer contractors he works with are printing things while they go to their day job.

An on-demand 3D printer contractor can earn anywhere between a few hundred dollars to more than $1,000 per week, Zaila says.

Drones are popping up everywhere from the toy store to high-tech military operations. More than one million drones were registered with the Federal Aviation Administration (FAA) at the beginning of 2018. Like 3D printers, capable drones have made it to the consumer market, with entry-living pricing as low as $300.

The need for drones has also increased as their uses are wide-ranging.  Real estate photography and mapping are two common projects that unmanned aerial vehicle or UAV pilots are contracted to do. This job can command between $300 per week to $3,500 per day, says Dan Edmonson, CEO of Dronegenuity.

In business for a little over two years, Edmonson, who employs contractors from all over the world, says the drone pilot talent pool has gotten bigger and better.

Although learning to fly a drone is relatively easy, Edmonson points out, there are other skills that can give pilots an edge over the competition.

“If you have a background in SLR photography, you’ll probably have a better eye than someone who doesn’t. This is really useful for real estate projects,” he says.

“On the other hand, guys who flew model aircrafts 10 years ago are more technical, so they’re good with the mapping. These guys can create a fly plan — which is handled by a human — and then, from that, you can create a 2D or 3D model of properties.”

The practice of 3D scanning sounds like something out of a dystopian novel, but in reality it’s a popular technology that’s infiltrating almost every industry. The medical, industrial, architectural, educational and art worlds have all embraced 3D scanning as an essential tool.

Basically, 3D scanning collects data on the shape and appearance of an object, which is then used to construct a 3D model. There are three ways people do 3D scanning: photogrammetry, structured light scanning and laser scanning.

This is a career that, while takes some skill, is something people can learn on the job, says Nick Tesi, president of TNG Visual Effects.

“It’s expanding extremely fast, so technicians are needed. Right now, big companies are picking existing employees and training them. We’re finding that there’s a lot of low-tech talent out there who can do this, especially if they apprentice,” Tesi says.

Beginner scan techs can expect to earn minimum wage; if they work for a company they could bring in $50,000 to $70,000 annually, Tesi says.

As driverless cars threaten the rideshare industry and retailers use technology to replace humans, workers should pay attention to the tech that’s emerging. For homebuyers who need an extra job to save up for that hefty down payment, flying a drone might be one way to land a house.