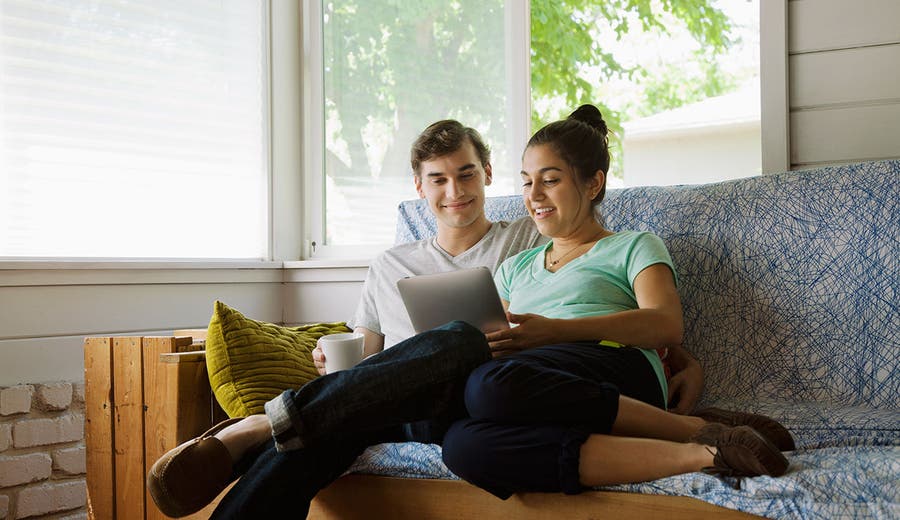 After high school, Stephen Kerrins-Torres — like an increasing number of young people entering adulthood — started mapping out his future. He was unsure about a lot of things, but he did have one clear goal in mind: becoming a young homeowner.

The son of financial professionals, Kerrins-Torres took his parents’ lessons to heart about the importance of saving money and living sustainably. He continued living at home and worked full-time instead of going to college. He was careful to avoid debt. He eschewed the FOMO (fear of missing out) mentality and skipped pricy nights on the town and eating out.

By age 23, Kerrins-Torres had saved $40,000 after five years of full-time work. His parents — both advocates of homeownership — offered an additional $20,000 they had saved over the years to help with a down payment. In all, it was enough to help Kerrins-Torres put 20 percent down on his first home, a two-bedroom, one-bath condo he bought last summer in San Leandro, California.

With his mom as a co-signer on the loan, excellent credit and a substantial down payment, he was in a prime spot to get an affordable conventional mortgage. Still, Kerrins-Torres got a roommate to help with costs to add even more financial cushion to his monthly budget. He credits his parents’ help and financial advice in helping him meet his goal.

“My entire life I was taught to save, save, save, and to buy a home when you can afford to,” says Kerrins-Torres, now 25. “I’m very fortunate.”

Kerrins-Torres has good company in his ambitious pursuit of early homeownership.

Four out of five Gen Z-ers (approximately ages 18 to 24) want to own a home, and are two times more likely than previous generations to save or plan to save for a home by age 25, according to a recent survey conducted by Realtor.com. Even more telling: two out of five Gen Zers want to become homeowners by age 25.

Wanting to buy a home — and affording it at such a young age when you haven’t had much time to work and amass savings — are totally separate things. But it’s not impossible, says Danielle Hale, chief economist with Realtor.com.

“(Gen Z-ers’) desire for homeownership may be similar to that of millennials and Gen X-ers, but graduating into one of the best labor markets in generations might give them the boost they need,” Hale says. “Only time will tell if Gen Z-ers are able to achieve their ambitious goals.”

Unlike other generations, Gen Z-ers seem more likely to accept help from their parents to buy a home, which gives them an edge in home-buying. Fifty-six percent of Gen Z-ers say they were likely to accept help from family to buy a home, Realtor.com’s survey found. On the other hand, 59 percent of Gen X-ers say they don’t expect or haven’t received help from family, and millennials were split down the middle on the issue.

Saving early and having family support — a luxury not everyone can count on — can give Gen Z-ers a jump on homeownership, but declining affordability is still a major obstacle. The S&P/Case-Shiller 20-city home price index in September jumped 5.1 percent from a year ago, but fell from the 5.5percent annual gain in the previous month. That’s a considerable sign of a cooldown.

That said, housing costs are out of reach in many areas, and the homes that are affordable are difficult to find due to a lack of inventory. Young homebuyers are having to get creative to make things work.

For starters, there’s historical increases in the number of younger people who are living with their parents, says Jessica Lautz, managing director of survey research and communication with the National Association of Realtors. Lautz also expects that more people in non-romantic relationships will buy homes together, while more young people move to second-tier metro markets or the suburbs to be able to buy a home.

“Gen Z has a strong preference for ownership, and they want financial stability,” Lautz says, adding that they’re being intentional about choosing degrees that will lead to high-paying jobs. “They’re looking at things in a different way and planning ahead. They want to own, and that’s not a trend we see wavering.”

Buying a home earlier in life builds wealth for the future

Young homebuyers like Kerrins-Torres aren’t thinking of retirement, but buying a home in their early 20s helps them build wealth they can count on in their golden years, according to research from the Housing Finance Policy Center at the Urban Institute.

The cumulative impact of building equity for a longer period of time means by the time those nascent homebuyers hit their 60s, they’ll get a stronger return on investment than those who bought first homes when they were older, says Jong Choi, a research associate with the Urban Institute.

Homeownership has considerable benefits in building wealth, but it’s not for everyone, says Sheryl Pardo, associate director of communications at the Housing Policy Finance Center at the Urban Institute. After all, it’s not just the monthly mortgage payments you have to worry about; there are the hidden costs of homeownership, too, such as maintenance, taxes, insurance and repairs.

“You can’t get into it if you’re not confident that you can repay mortgage,” Pardo says, adding that many young consumers have thin credit profiles and are wary of taking on debt. “You can’t time the market, so you have to [buy] when you can afford it and when it works for you.”

Another obstacle is that younger people tend to move more for job opportunities. It may not make sense to get tied to a mortgage if you might relocate in a few years. The five-year rule still applies — it takes at least that long in most markets to recoup the many costs associated with  buying a home.